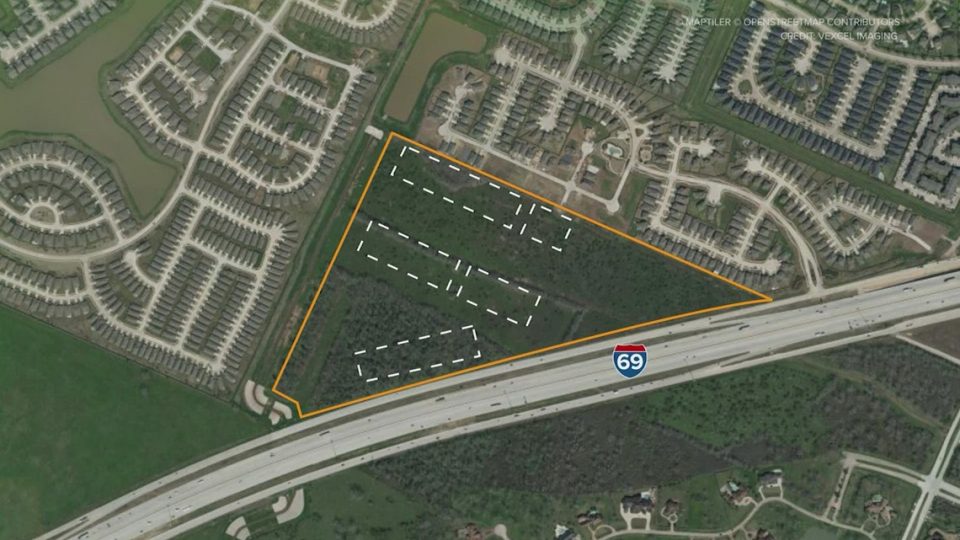 “We are old, we have a lot of time on our hands, and we are cranky!”, said Del Webb Sweetgrass resident Robin Stewart.

RICHMOND, Texas — As Houston continues to expand into surrounding counties, several residents from two communities in Richmond are upset about a proposal that would turn the wooded area behind their homes into distribution warehouses.

The Del Webb Sweetgrass and Williams Ranch communities are located close to a busy stretch of the Southwest Freeway in Richmond. However, they’re insulated from the highway by several acres of wooded area.

However, developer Vigavi Realty is working to get approval to build several industrial warehouse buildings on 73 acres of land near the residential communities.

During Monday night’s Richmond Planning and Zoning Commission meeting, committee members considered approving a variance on the plat of land that would allow the developer to move forward.

The beginning of what will likely be a very long process.

Nearly 200 residents from surrounding neighborhoods showed up to protest the proposal.

“We are old, we have a lot of time on our hands, and we are cranky!”, said Del Webb Sweetgrass resident Robin Stewart.

Resident and land surveyor Mark Buhrke was also at the meeting.

“If we don’t let them know that we don’t want this in our backyard, they will proceed completely oblivious to the opposition that is clearly evident,” Buhrke said.

Many of the residents said they weren’t against the land being developed; however, they’re concerned that distribution warehouses could bring several 18-wheelers, and what could go along with them like idling diesel engines, too close to their homes.

The 73 acres of land Vigavi wants to develop near Richmond backs up to dozens of existing homes.

Renderings submitted to the City of Richmond show the buildings would be located near the fence line and 18-wheeler parking would be on the interior of the property. The renderings don’t list how many parking spaces are planned for 18-wheeler trucks, however, there appears to be about 100 in the rendering.

KHOU reached out to Vigavi Realty on Monday for comment, but as of late Tuesday, we haven’t heard back.

The planning and zoning committee meeting was a small victory for residents as the request for a variance was denied. Vigavi is able to make small tweaks and then submit a revised plan.

“I don’t know if we will win on legal grounds,” Buhrke said. “But in the court of public opinion, I think we are way ahead already.”

More information about the plan is available on the City of Richmond’s Planning and Zoning Committee’s April 4th agenda.

Below is a statement from the City of Richmond regarding Monday’s decision:

“The City of Richmond’s Planning and Zoning Commission reviewed and denied the variance of a Preliminary Plat for the Williams Ranch Business Park. The proposed site is 73.295 acres of land – 1 Block – 0 Lots – 4 Reserves. The subject site is located along the north side of Highway 59 and to the south of Williams Ranch and east of Del Webb residential subdivisions and sits outside of the City of Richmond’s city limits but in the ETJ. The Williams Business Park is proposing to have an industrial complex that will have several large structures for storage and office space. Many residents from the surrounding proposed residential areas attended the meeting and showed a strong opposition to the proposed site. The City of Richmond will continue to use their Comprehensive Master Plan as a guide for smart growth and provide safe, secure and family-oriented communities.”

Buyout Loans Sell at a Discount as Recession Fears Mount