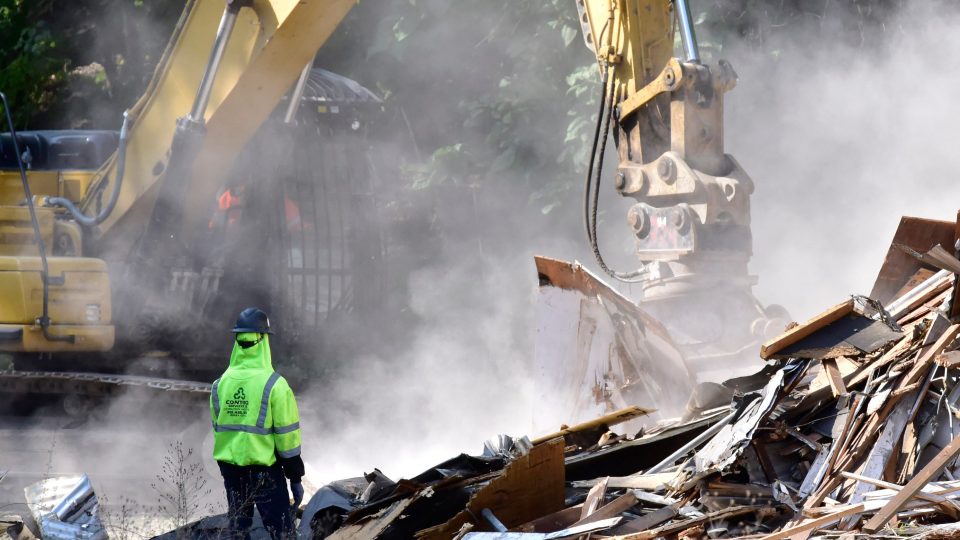 HAWTHORNE — A paint factory with a tortured past of contaminated soil, legal actions and a devastating inferno was ripped to the ground on Washington Avenue, ushering in the start of a drama-free future for the property.

But, it will take several months before anyone can be sure that groundwater is clean at the 1.4-acre site, less than 500 feet from the north bank of the Passaic River.

Razing the former Pan Chemical Corp. buildings was needed to finish remediation of the property, a process that has been going on for years.

Demolition did not pose a health risk to residents because the tainted soil was not disturbed, said Mayor Richard Goldberg. “In that respect, it’s removing an eyesore,” he said, “but it’s not endangering the public. This is a giant step.”

Michael Weaver, a geologist overseeing the remediation, said the soil is contaminated with heavy metals and volatile organic compounds that include acetone, barium, chromium, ethylbenzene and lead.

Crews are preparing to drill wells there next month to inject the ground with treatment chemicals, said Weaver, of Atlantic Environmental Consulting Services in Warren.

The holes will then be monitored for at least a year, Weaver said.

Richard Stewen, the borough’s construction code enforcer, said buildings at the property were dilapidated and its new owner, Ebury Street Capital, a real estate investment firm in Rye, New York, was told to take them down. Before demolition, the site attracted graffiti artists, squatters and varmints.

Patrick Seymour, an attorney for Ebury, declined to comment on the company’s plan for the site.

The property was once eyed by NJ Transit, which wanted to make it part of a hub for local commuters. An idea was suggested that it could expand the parking lot for the neighboring rail station.

In 2006, the largest building at the World War II-era plant went up in flames. At the time, the borough was embroiled in a tax dispute with Pan Chemical, which moved most of its operation to Carlstadt. The complex was sold in an “as is” condition, with remediation costs being assumed by the purchaser.

The North Haledon-based limited liability company that bought it defaulted on its taxes, leading to Ebury picking it up on a lien sale for $152,923 last year.

Pan Chemical, which made inks, lacquers, metal coatings, nail polishes and vinyl finishes, was beset with pollution woes as early as 1987.

The company sought to remove underground storage tanks at the property, and when it contacted the state Department of Environmental Protection for a permit, officials found contaminated soil.

In 1998, Pan Chemical was the subject of the first criminal prosecution of any type under the Air Pollution Control Act, a state law that was enacted 43 years earlier. It admitted to releasing hazardous toxins into the atmosphere and, under a plea deal, paid more than $109,000 in fines.

Philip DeVencentis is a local reporter for NorthJersey.com. For unlimited access to the most important news from your local community, please subscribe or activate your digital account today.