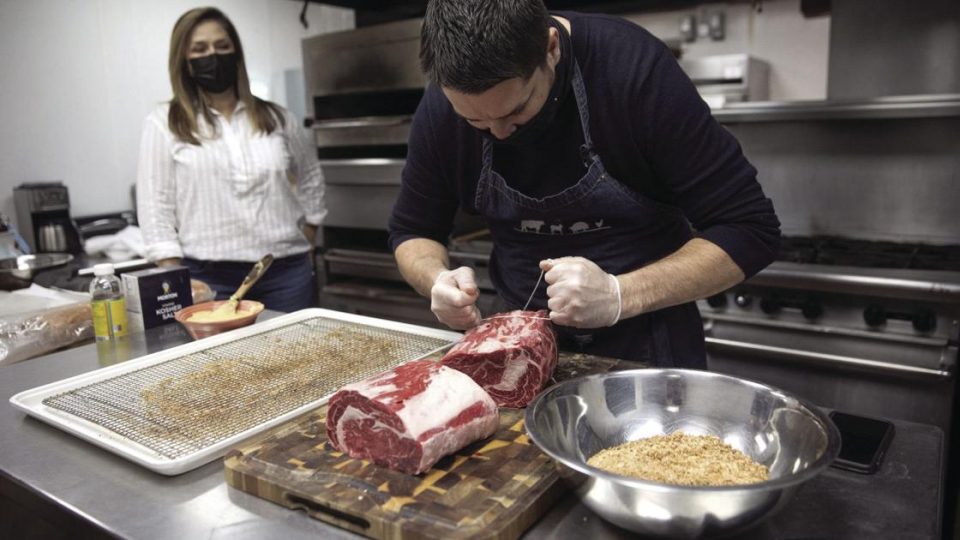 CHICAGO — There were moments, early in the pandemic, when Joseph Musillami wasn’t sure how the family business would make it.

Purely Meat Co., a commercial butcher in Chicago’s West Humboldt Park neighborhood that supplies mostly high-end restaurants, saw sales plummet 75% when the state banned indoor dining in March. It halted plans to expand and let go of many of its 60 employees.

“It started out beyond scary when you think you’re going to lose your house,” said Musillami, whose wife, Maribel Moreno-Musillami, founded the company nine years ago.

Surviving 2020 felt like a “street fight,” Musillami said. But for all the struggles, he thinks the meat company will come out on top.

His wife created a website to sell Purely Meat’s products directly to consumers, and soon it became a major part of the business. The company’s drivers deliver cases of vacuum-sealed, freezer-ready prime cuts to people’s suburban doorsteps rather than the city’s swank downtown restaurants. Going into 2021 it plans to help restaurants sell branded products to consumers as well.

“These are two new facets of our business that we would never have dreamed of doing,” Musillami said.

Purely Meat plans to maintain its new consumer business even as it prepares for a midsummer restaurant rebound, Musillami said.

It has recaptured 70% of its usual sales and has 40 employees working.

“I think we are going to be better,” Musillami said.

In various pockets of the food industry, a bruising year is giving way to optimism that the lessons learned will make for a stronger 2021.

Farmers and other food producers that pivoted their business models to find new revenue streams are making some of those changes permanent. Grocery stores are adapting to consumers’ embrace of online food shopping. And restaurants that survive the wreckage of their industry are expected to come roaring back, sharper and leaner than ever, into the waiting arms of a public desperate to go out.

Opportunities at the farm

While the local foods movement has been growing for a decade, the pandemic gave it a shot in the arm as people sought to support community and became more aware of quality as they cooked at home.

Empty grocery store shelves also revealed the potential for supply chain disruptions and prompted shoppers to explore buying directly from local farms, which were reeling from the disruption of restaurant and other food service clients and needed new revenue streams.

Some farms, especially those near cities, dove into e-commerce to sell directly to consumers, and customers were patient as they worked out the kinks, said Raghela Scavuzzo, associate director of food systems development at the Illinois Farm Bureau.

Milk delivery made a comeback. Community Supported Agriculture programs, which deliver boxes of produce, found new customers. Farmers collaborated to deliver their products together to reduce costs and created bundled boxes to sell at farmers markets.

“They built this idea that they can promote each other and boost sales,” Scavuzzo said. “I think you’re going to see more of that going forward.”

Meanwhile, the pandemic exposed vulnerabilities in the meat industry that revived interest in local meat processing.

A bottleneck formed when large slaughterhouses faced outbreaks of COVID-19 among their workers and temporarily closed or slowed down, leaving farmers with nowhere to send their market-ready livestock.

Meat processing capacity in the U.S. is highly centralized, and the disruption created such a backlog farmers still can’t get appointments to slaughter their animals until late 2021 or into 2022.

Farmers, in response, have called for expanding capacity at local processors or establishing new ones, which could reinvigorate local rural economies, said Tasha Bunting, associate director of commodity and livestock programs at the Illinois Farm Bureau.

“There’s a lot of conversations in a lot of different parts of the state where groups are trying to develop something that could be a success,” Bunting said. “A year from now there will be a few more (processors) that are close to where the producers are.”

Grocery chains, which benefited greatly this year as people rediscovered their kitchens, recently released 2021 food trend projections that reflect the pandemic’s influence on what people want to eat.

Yet the pandemic’s greatest impact on grocery stores may not be what they sell, but how they sell it. Consumers who previously might not have trusted others to pick their avocados gave online grocery shopping a shot and many of them are expected to become permanent converts.

In a September poll of 60,000 consumers, 43% said they had purchased groceries online in the past six months, up from 24% who said the same two years earlier, and nearly half said they plan to continue to do so.

Online shopping is expected to account for 21% of grocery sales by 2025, or $250 billion, a 60% increase over pre-pandemic estimates, according to the poll from Mercatus, a grocery e-commerce platform, and Incisiv, a consumer insights firm.

Forrester, a research and consulting firm, said it expects retailers and brands to invest heavily in microfulfillment centers and “dark stores” dedicated to fulfilling online orders.

While grocery delivery was popular as people avoided leaving their homes, the bigger opportunity is in curbside pickup, which costs less, experts say. Many stores are designating parking spots for pickup and installing pickup lockers.

The start of vaccinations has the restaurant industry optimistic that a euphoric recovery will arrive by summer.

“You will have a lot of jubilation and celebration and reasons to get together,” said R.J. Melman, president of Lettuce Entertain You Enterprises, the Chicago-based restaurant group behind RPM, Beatrix, Shaw’s Crab House and many others.

Still, corporate travel will be slower to return, so downtown restaurants that rely on business from conventions and hotel guests may continue to struggle, Melman said. Industry watchers expect most restaurants to be back to 80% of normal sales in six months but hotels won’t regain normal occupancy levels until 2023 or 2024, said Ron Swidler, chief innovation officer at The Gettys Group, a Chicago-based restaurant and hotel design firm.

While neighborhoods mourn the closure of favorite restaurants, the empty storefronts will offer opportunities for surviving restaurateurs and a new wave of entrepreneurs, Swidler said.

Lettuce Entertain You, which has more than 120 restaurants across the country, is evaluating more potential locations that it was a year ago, Melman said.

“The good real estate will be gobbled up,” Melman said.

Meanwhile, some of the efficiencies and innovations restaurants introduced to survive the pandemic are likely to endure because they are good for business.

Virtual catering and family-style takeout dinners will remain as long as customers want them, Melman said.

Menus will be shorter as restaurants focus on what they do best, Swidler said. Takeout and delivery will be better executed. More automation in the kitchens will help reduce labor costs, which could make it less expensive to operate a restaurant and encourage more to open, Swidler said.

“I am absolutely betting that we will come out of this with better restaurants,” he said.

Some pandemic solutions will be sent packing. Fast-casual eateries might opt to keep menus digital, but finer dining establishments will scrap the QR codes and return to printed menus that are part of the physical experience people crave, said Doug Roth, president of Playground Hospitality, a restaurant and hotel consultancy.

“People will want to feel the soul of a restaurant and the comfort of a restaurant,” Roth said. “I think next year fourth quarter is going to be off the charts.”

Rising to the challenges in the food industry | Supply Chain