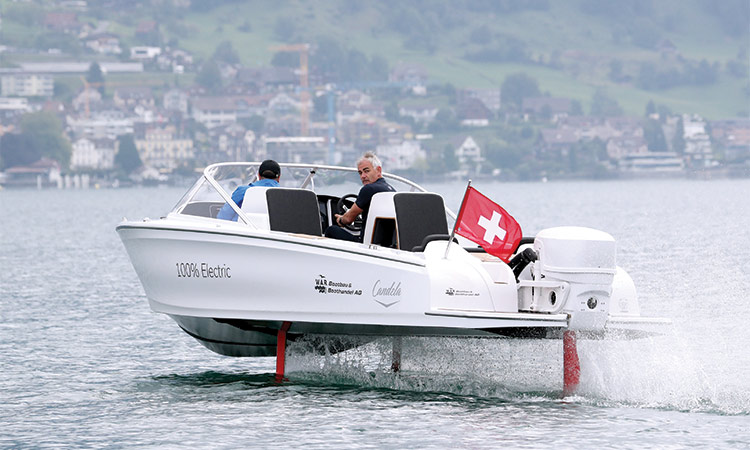 An electric powered boat on Lake Lucerne near Luzern, Switzerland, on Wednesday. Reuters

The world’s first electric-powered hydrofoil speedboat, which reduces energy consumption and noise – as well as sea sickness – by “flying” above the waves, has made its debut on Switzerland’s lakes.

The Candela Seven can hit speeds of 55 km per hour when its foils lift it out of the water. Its manufacturers say it travels further and smoother than other electric boats.

The foils reduce water friction – and the effect of waves slamming into the boat – cutting energy consumption by 80% compared to normal diesel-powered boats and extending the craft’s range to 90 km (56 miles).

The carbon fibre boat carries an on-board computer which automatically adjusts the foil positions 100 times per second to reduce rolling and sea-sickness.

Until now, electric boats have tended to sacrifice either speed or range because of the capacity limits of their batteries.

The Candela Seven made its Swiss debut on Lake Lucerne this week, with Candela Speed Boat hoping to drum up new business with a European tour. The Stockholm-based company has delivered 16 boats since last year.

“People could use it to commute across lakes or for day trips,” he said. “You can drive this with a clean conscience from an environmental point of view, and it’s great fun.”

After opening the Lotschberg Base Tunnel in 2007 and the Gotthard Base Tunnel in 2016, the Ceneri in Switzerland’s southern Ticino region is the final stage of the New Railway Link through the Alps project.

The route should ease the flow of goods along a railway freight corridor running from the North Sea at Rotterdam, Europe’s largest seaport, to Genoa, Italy’s biggest port, on the Mediterranean. It is hoped the link will slash the number of trucks rumbling through the Alps by offering an alternative rail route.

For example, travel times between Zurich and Milan — already significantly shortened by the Gotthard tunnel — will be cut by 40 minutes to just three hours.

Transporting freight in Switzerland has long required powerful locomotives to navigate the mountain passes — and also heavy operations to load containers onto trains at the border before crossing the landlocked country.

“This is the final link that gives us a flat line straight through the Alps,” Swiss Federal Railways chief executive Vincent Ducrot told AFP at the tunnel’s media launch on Thursday.

“In the future, we will be able to have freight trains 750 metres long that can carry up to 2,100 tonnes of goods” per convoy, he said, highlighting the environmental benefits.

By taking the equivalent of 3,000 trucks off the roads and transporting those containers on the new rail route, it should be possible to reduce carbon dioxide emissions by 900 tonnes per day, he said.

The tunnel, at 329 metres above sea level, should see 170 freight and 180 passenger trains passing through per day.

“This new train line through the Alps is the project of the century for our country,” President Sommaruga said after cuting the ribbon at the northern end as the first freight train passed through, heading south.

“It is the biggest investment we have ever made,”, she said, calling it “a strong sign of an intelligent transport policy.”

The NRLA plan was initially approved by a referendum in 1992. The three-tunnel project cost 24 billion Swiss francs ($26.4 billion, 22.7 billion euros) and was partly financed by licence fees on heavy goods vehicles.

The Ceneri tunnel cost 3.6 billion francs — far behind the 12.2 billion invested in the Gotthard tunnel, which is the world’s longest at 57 kilometres.

Switzerland’s economy shrank by 8.2% in the second quarter compared with the first three months of the year, the government said recently, as the COVID-19 pandemic triggered the worst quarterly downturn in 40 years.

Why Some Organizations Are Managing Coronavirus Risk Better Than Others

Europa is plain sailing with LeoSea IT investment

Sweet signs of the Secret Life of Bees