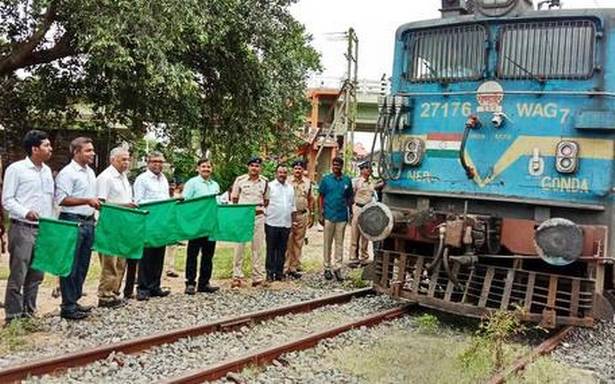 The first freight rake service from Sankari durg to Vanjipalayam Station in Tiruppur district, carrying cement consignment, was flagged off here on Wednesday.

Salem Railway Divisional Manager U. Subba Rao flagged off the service from Sankari durg in the presence of E. Harikrishnan, Senior Divisional Commercial Manager, Harikumar, Senior Divisional Operating Manager, S. K. Palaniappan, vice president of India Cements Limited, Sankari and other officials. The consignment was booked by the company that has proposed to move around 15 rakes in a month that will fetch a revenue of ₹ 45 lakh a month to the division, said the railway officials.

Officials said that the division has been exploring various measures to increase freight earning and the new service was part of it. Bharat Petroleum Corporation Limited (BPCL) opened their new terminal at Irugur station last year, which fetches revenue for the division. Currently, the division has 12 Goods Shed and 16 Private Siding.

Greenpeace Holds Up Tanker With Russian Cargo at Antwerp

FROM THE MAGAZINE: An award-winning career on the heavy lift front line