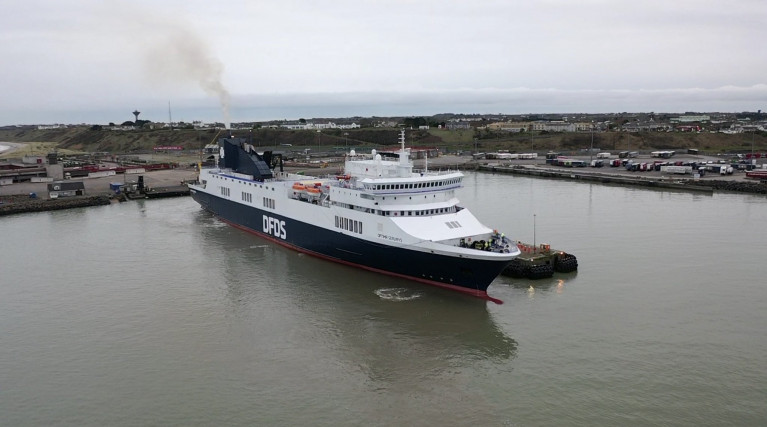 Afloat tracked the ‘Visentini’ built Optima Seaways owned by DFDS which departed the French port on Monday evening before berthing in Rosslare Europort this morning.

The inaugural freight sailing is scheduled to take place this Saturday, 2nd January with the departure from the south-east Irish port to mainland continental Europe.

The new route will enable Irish hauliers and other customers to keep their freight transport within the EU and avoid the customs formalities imposed by Brexit and associated potential delays.

DFDS will run 6 weekly departures from each port, either in the afternoon or evening, with a crossing time of 24 hours. To maintain such an intensive schedule the Danish operator has chartered in an additional pair of ships and crews, they are the Kerry, another Visentini built ropax (same design of Optima Seaways) and the larger passenger capacity ferry, Visby which will serve in a freight-only mode.

The DFDS vessel along with the chartered ferries have each a capacity for up to 120 trucks and trailers plus drivers. Accommodation for drivers will be based on individual COVID-19 safe cabins during the crossing of just under a day long in duration.

Another bonus for the Wexford port will be the launch of another ‘Brexit-buster’ service when Brittany Ferries further consolidates its presence in the opening of a combined freight and passenger ‘no-frills’ ferry service to Cherbourg on 22nd March. On the next day their Cork-Roscoff ‘seasonal’ route resumes to Brittany.

As for Brittany Ferries new Ireland-France service to Normandy, this will be in competition with Stena Line’s service also serving the port at the tip of the Contentin Peninsula.

Returning to the DFDS new Ireland-France route, is the deployment of mixed vessel types involving a pair of more freight orientated vessels (ropax) limited to around 300 passengers and 160 cars approx. This compared to the larger 1,500 passenger/500 car ferry in the form of Visby which as mentioned beforehand will be carrying only trucks and drivers.

Perhaps, the chartering of the latter vessel from Swedish based operator Destination Gotland is just a short term measure? However, this vessel had previously served a short sea crossing to the Baltic Sea island of Gotland which took only 3 hours and 15 minutes. Or will DFDS consider opening a ‘full’ ferry service with a suitable overnight ferry for holidaymakers during the high-season? on the Ireland-BeNeLux nations link with closer and easier access beyond.

Noting Brittany Ferries earlier this year opened the new Rosslare-Bilbao route to northern Spain. The route compared to the DFDS operation will have a longer crossing time of 28 hours plus.

Since the late 1960’s Rosslare has had a history of pioneering new direct routes to mainland Europe, beginning firstly the route to Le Havre which was launched by a consortium including Irish Continental Line.

ICL was a state-owned passenger subsidiary of Irish Shipping Ltd, and would later evolve to become the privately owned Irish Ferries, whose parent company is the Irish Continental Group (ICG). The ferry firm currently operates from Rosslare but only to the Welsh port of Pembroke in the UK.

As for services to France, Irish Ferries in recent years abandoned the Irish port by switching to Dublin Port from where Cherbourg is served by yet another Visentini series ropax the chartered Epsilon. In addition the cruiseferry W.B. Yeats takes over the role of the ropax again in May and for the summer season.

Dhaka: Relocation of Rohingyas to Bhashan Char not forceful

Five key trends in smart warehousing for 2021 and beyond

Impact on talent synergies between the UAE and Israel