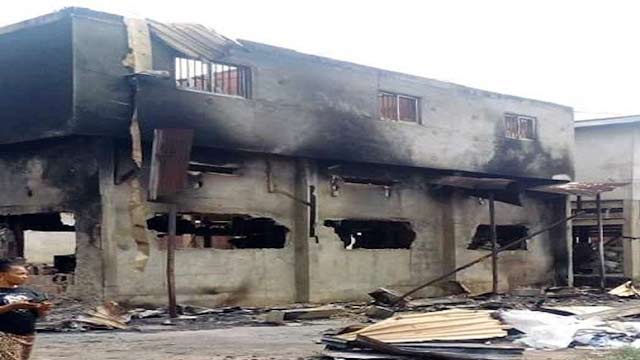 Fire yesterday gutted parts of the headquarters of the Nigeria Immigration Service (NIS) in Abuja. According to the official Twitter handle of the agency, the fire started in the early hours of yesterday, leading to burning of some of the offices before it was put out by fire servicemen.

“A fire incident occurred at our service headquarters this morning. It affected some of our offices. The fire has been put out by our federal fire service station and support from other agencies around the airport,” the Twitter message read.

The Guardian made efforts to speak with the Public Relations Officer of the service, Sunday James, for details on the affected offices, but he didn’t answer his calls.

Journalists who visited the NIS head office were denied access as it was barricaded and cordoned off by security operatives. The agency, however, stated on its Twitter page that: “The cause of the fire is being investigated and we assure the public that the incident will not in any way affect the discharge of our services.”

FIRE also razed shops and valuables at the Kugbo Furniture Market, Asokoro Extension, Abuja yesterday. According to an eyewitness, the fire, which started around 6:00a.m. had lasted over an hour before the men of the Fire Service arrived.

A shop owner, who cried uncontrollably, told newsmen that he just stocked up his shop on Saturday but everything had gone down in flames. Another shop owner, who simply identified himself as Joe, said all his goods went with the fire, adding that this happens every year, either in December or January.

The company, owned by Chief Louis Onwugbenu, manufactures the Louis Carter brand of motorcycles, which is widely used in the South-eastern part of Nigeria and the South-south.

A company source said the fire started 10:00p.m. on Saturday and raged for about six hours despite attempts by men of the Anambra State Fire Service to put it out. It was gathered that the fire defied all the fire extinguishing equipment in the company.

General Manager of the company, Mr Ndubisi Okoli, said the company’s security men alerted him to the fire as soon it broke out.

“The security men said the magnitude of the fire could not be put out with fire extinguishers at the factory, and that they had called the fire fighters’ emergency number, which led to the arrival of the men of the department.

“The fire was caused by Enugu Electricity Distribution Company’s (EEDC) high tension cable that exploded and sparked off fire into the section of the factory, which stores our raw materials. The raw materials and crushing machines worth over N500 million was completely razed down, just as the building was completely burnt too, but no life was lost,” Okoli said.

Also reacting, the chairman of the company, Chief Onwugbenu said the fire incident had caused a huge loss to the company that had hundreds of workers in its employ.

Onwugbenu acknowledged the effort of Chief Innocent Chukwuma, chairman of Innoson Group, and member representing Nnewi North in Anambra State House of Assembly, Nonso Smart, who he said were physically present to motivate the fire fighters.

Onwugbenu said it would cause him huge amount of money to rebuild the factory, adding that he was uncomfortable about the number of workers that had been thrown out of job because of the inferno.

Was a Vespa factory coming to Pakistan?

Behind the scenes at the Quality Street factory, the Halifax institution producing our favourite purple tin

Bertland to step down as Beijer Ref CEO