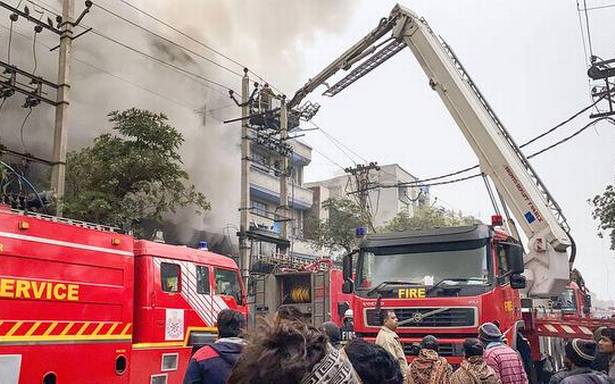 A fire broke out at a shoe factory in Narela Industrial Area on Tuesday that caused a cylinder blast which led to an adjacent building also catching fire.

No injuries were reported in the incident.

A fire department official said that a call was received around 4 a.m. following which 30 fire tenders were pressed into service. The fire was doused after six hours.

“After the fire broke out, a cylinder blast also occurred and the fire spread to the adjacent factory. The factories did not have No Objection Certificates from the department. They also did not have firefighting equipment and had only one gate to exit and enter,” the official said.

Fire department said that the fire started from the shoe factory and then spread to the adjacent factory where paper boxes were manufactured. “Both the factories had highly combustible materials kept inside which led to the fire spreading quickly,” he said, adding that during the firefighting operation, three firemen sustained injuries but were given first-aid after which they resumed their work.

On Monday, a massive fire had broken out in a residential building in Kirari leading to the death of nine, including three minor siblings.