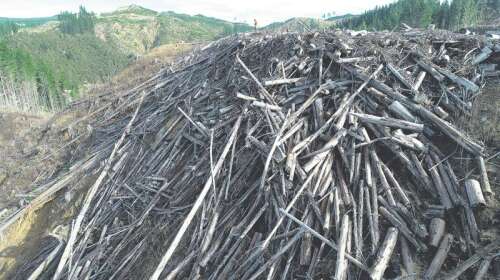 Forest management company PF Olsen has been fined $198,000 for poor harvesting practices that contributed to the devastation caused by forestry waste at Tolaga Bay in June, 2018.

The company was sentenced by Environment Court Judge Brian Dwyer in Gisborne yesterday.

It pleaded guilty earlier this year — a day ahead of a scheduled judge alone trial — to a Resource Management Act charge that between June, 2017, and June, 2018, it discharged contaminant, namely sediment and forestry waste, on to land at Paroa Forest in circumstances where it could (and did) enter water.

All but 10 percent of the fine will go to Gisborne District Council.

Paroa Forest is an 1800-hectare plantation forest to the west of Tolaga Bay, owned by Permanent Forests Limited, and one of thousands of forests across New Zealand managed by PF Olsen.

Terrain is steep and prone to severe erosion.

The Tapuae and Waipurupuru streams flow through it. These and other tributaries flow from the forest into Uawa River.

The company was the holder of four consents authorising the usual work associated with forest harvesting, and none of which allowed discharge of forest waste to water or to land where it could enter water.

Tolaga Bay was hard hit by the first of two storms in the region in June, 2018.

Heavy rain caused severe flooding in the nearby Tupuae catchment on June 3 and 4 and the mobilisation of a huge volume of sediment and wood debris from the area’s plantation forests.

According to an agreed summary of facts, the majority of damage caused by sediment and forestry debris at Paroa Forest was the consequence of collapse of soft erodIble soils rather than skid site collapse which gives rise to this charge against the company.

However, it was apparent from photos that considerable amounts of forestry waste and sediment were mobilised from skid sites and inevitably made their way to water.

Inspectors noted seven skid sites had inadequate drainage contrary to resource consent conditions, there were unstable accumulations of slash on two skid sites, unstable slash was left on the sides of five skids sites, and a culvert had not been flumed properly.

Permanent Forests has already paid $388,000 for remediation and the owners anticipate there is still another $150,000 work to be done.

It was possible a small amount of forestry debris from Paroa Forest washed down the Tapuae Stream into the Uawa River, which flows to Tolaga Bay.

The contribution cannot be quantified as anything from the forest, once it entered water courses, became part of an overall glut.

However, the lack of connection between most slash deposits and waterways in Paroa Forest suggest PF Olsen’s contribution to the devastation at Tolaga Bay was minimal.

It was also possible some slash and windthrow from a skid site at Paroa Forest contributed to a log jam in the upper Tapuae but again it was not possible to quantify.

PF Olsen’s counsel Glyn Hughes submitted the company’s lesser contribution to the overall devastation at Tolaga Bay was a mitigating factor. He noted failures were only found at seven of 49 skid sites in the forest.

Much of the discharge material from slopes in Paroa Forest was into ephemeral (temporary, rain-created) streams.

But council prosecutor Adam Hopkinson contended the company’s culpability for its failures was high.

Judge Dwyer agreed. He said there were numerous instances of discharges from the skid sites in Paroa, which potentially contributed to the cumulative adverse effect of what occurred at Tolaga Bay — even if it could not be proved they actually did.

“The Resource Management Act is directed at least in part to the avoidance of risk of environmental harm and I’m obliged to have regards to the potential effects of the discharge.”

Those failures were also in breach of the Forest Owners Code of Practice “and frankly, simple common sense”, Judge Dwyer said.

Failure to comply with conditions of resource consents was inherently serious, he said.

Despite differences in this offending, the sentence starting point should be the same as those he set when earlier sentencing Juken NZ Ltd and Aratu Forests Ltd (formerly Hikurangi Forest Farms) for similar breaches — $200,000.

PF Olsen had two previous convictions for RMA offending in the Bay of Plenty in 2008.

That justified a 10 percent uplift, taking the overall sentence starting point for this offending to $220,000.

In his view, there were were no mitigating factors other than a discount for the company’s guilty plea, which was last minute, so limited to 10 percent, the judge said.

Penalties needed to be a deterrent, he said.

What happened at Tolaga Bay was “a complex and dreadful situation and I’m concerned that’s it’s going to happen again in the future in this region”.

He acknowledged Mr Hughes’ submission as to non-existent compliance checks by the council within the forest between 2016 and 2018.

The council’s failure over a two-year period to monitor harvesting operations of large commercial forest on land known to be highly vulnerable to slope failure particularly after forestry clearance, could only be described as “disgraceful”, the judge said.

Part of the RMA imposes a duty on local authorities to monitor the exercise of resource consents that have effect in the region or district. The council failed to meet that obligation.

Mr Hopkinson said the council was taking steps to improve monitoring practices but whether that leads to avoidance of this in future remains to be seen, the judge said.

■ Ten forestry companies operation in various parts of this region were initially subject to prosecution by the council after the 2018 storms. The only cases still pending are for Ernslaw One Ltd and TimberGrow Ltd, which have pleaded not guilty and are awaiting trial by jury.

DNS Forest Products Ltd was fined $124,700 but will appeal the fine later this week in a High Court hearing at Gisborne.

Slash: The sheer volume and large diameters of waste logs left on this skid site and mobilised by the heavy rainfall is apparent. This material is typical of wood that made its way on to the beach at Tolaga Bay via tributary streams of the Uawa River, which were inundated by waste from various forest company harvesting operations within the catchment area. It is not possible to determine how much each company contributed but PF Olsen’s load was accepted as likely to be minor. Nonetheless that did not minimise the offending, Judge Brian Dwyer said in the Environment Court in Gisborne yesterday before fining PF Olsen $198,000. The key point under the Resource Management Act was that it had the potential to contribute to the significant adverse effect on Tolaga Bay, Judge Dwyer said. Picture supplied

site failure: This landing site was one of seven with failures noted by district council inspectors when they visited Paroa Forest, managed by PF Olsen, after the June 2018 storms. Inadequate water controls on the site caused water to enter an area of fill and slash and erosion of the slope face. Accumulations of logging debris mixed with soil, haphazardly stored on top of the landing, cascaded downhill. Picture supplied