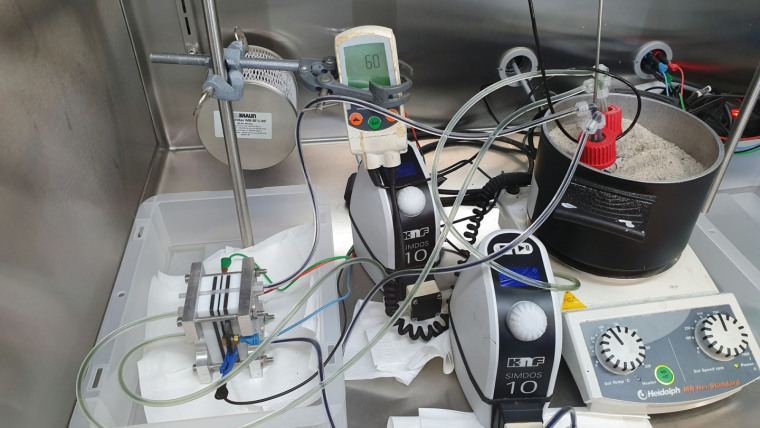 German scientists have developed a new electrolyte material that can cope with temperatures of up to 60 C. The material is based on ferrocene, an organometallic molecule known for good redox stability that is commonly used as an internal standard for electrochemical measurements.

Scientists from the Center for Energy and Environmental Chemistry Jena (CEEC Jena) at Germany’s Friedrich Schiller University have developed new polymer electrolytes for redox flow batteries, which would make such storage systems more efficient and heat-resistant.

The researchers claimed that the new material solves two of the main issues that are preventing redox flow batteries from reaching commercial maturity. One is the use of environ­mentally hazardous and toxic heavy metal salts, such as vanadium, as electrolytes. The second issue is the current maximum limit of 40 C as their operating temperature.

“The polymer can cope with a significantly higher temperature of up to 60 C, so that the additional expense for a sensitive tem­pe­rature management is eliminated,” the academics said.

They described their findings in “Aqueous Redox Flow Battery Suitable for High Temperature Applications Based on a Tailor‐Made Ferrocene Copolymer,” which was recently published in Advanced Science Materials. The new polymer material is based on ferrocene, which is an organometallic molecule known for having good redox stability. It is commonly used as an internal standard for electrochemical measurements.

“Since ferrocene contains the metal iron, it can still be considered less problematic in terms of market value, availability, noted toxicity, and pollution, when compared to other metals used in battery systems, such as vanadium, cobalt, and lithium,” the researchers said.

To address the challenge of dissolving the hydrophobic ferrocene in water, the researchers developed copolymers with the water-soluble commercial hydrophilic comonomer Metac, or polymerizable precursors that are used to improve the flexibility of polymeric materials.

“Battery testing revealed stable cycling behavior for the polymer over 100 cycles of charging and discharging at ambient temperature and 60 C with an average coulombic efficiency of over 99.8% through all cycling experiments,” the academics said. “Investigations of the temperature stability revealed that the herein presented active materials not only easily withstand elevated temperatures, but that these conditions actually aid the electrochemical processes.”

The researchers claimed that the results confirm that there is no need for expensive cooling or consideration of environmental impacts for such electrolyte solutions. The tested device is an aqueous, polymeric redox flow battery.

“(It) is able to deal with extreme conditions such as heat and strongly saline solutions,” the researchers said, noting that it may represent a suitable storage solution for temperature-critical locations, such as countries along the equator.

Completion of TEN-T core network not possible without EU support