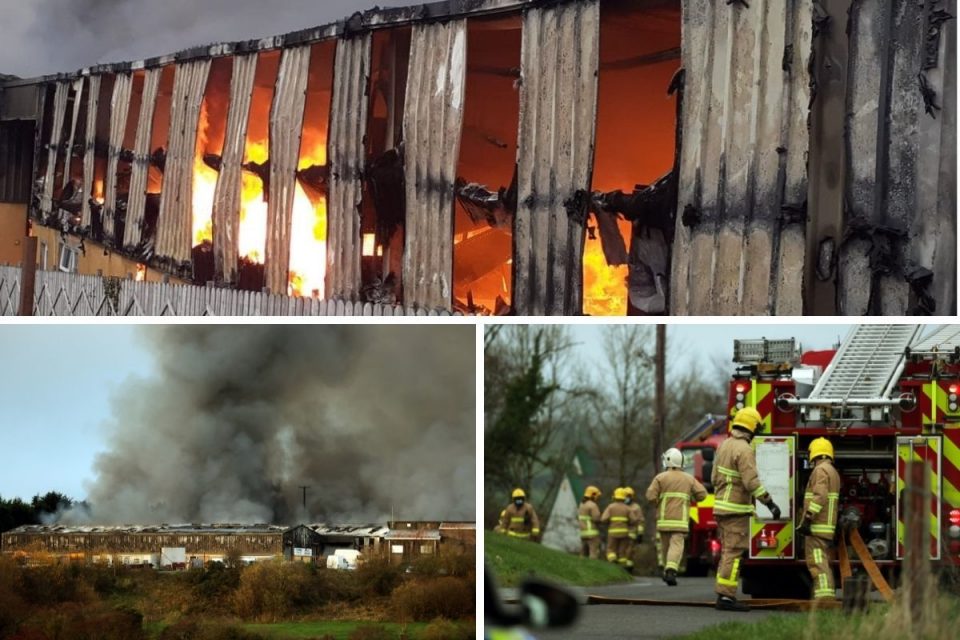 THE manager of Timoney Windows and Toughened Glass has spoken about his relief that no one was hurt following the large blaze that gutted the businesses factory in Garvary last Friday, November 19.

Rodney Timoney spoke to The Impartial Reporter as his family and their staff dealt with the devastating impact of the fire.

He said: “It’s a shock when you see something built up over 40 years and then a tsunami of fire just hit it, and you see all the people and the faces who have been here for more than 30 years.

“Everybody is okay, and everyone got out and it was just a freak, freak accident.

“It was just one of those things – the fire started at the big generator, and then it went up and the whole thing took up. Firefighters came from all over the country. The most important thing is that life is safe and that people got out.”

Reflecting on what is next for the business, Rodney: “It’s such a big task. The factory is 70,000 square foot, and most of it is completely burnt, the steel is burnt, and the roof has fallen in at parts.

“Anything that got heat damage and is still standing is smoke damaged. The majority of the machines are completely damaged.

“It’s been a family business for that length of time, but [the fire] has the knock-on effect on us here, but also on our other customers, and the chain [of disruption] goes on.

“Dad started the business in 1969 out in Springfield. We moved up to Garvary around 1975, and the business really grew from then.”

The factory has 28 staff, including full- and part-time workers at the factory. Many family members have been involved with the business over the years.

Rodney said: “All dad’s brothers worked here over the years, and we have two aunts who still work here, as well as direct family – my own daughter works here, so we are going into the third generation here.

“It has been a real pleasure to serve the community in the years gone by, whether it be things like providing emergency glass for things broken down the town and so on.

“We’ve done so many houses in the country, not just in the North, but in the South and all over too.”

The Timoney family are grateful for all the messages of support they’ve received from across the community.

Rodney said: “Everybody has been so good – we have messages from everybody, and people have sent up sandwiches and everything. The community really pulled together.

“We mightn’t see one another every day of the week, but the great thing about life is that if somebody is in trouble, we all pull together.”

Concluding, Rodney said: “Please keep sending business enquiries to us and we will endeavour to meet your needs where we can.”

A spokesperson for the Northern Ireland Fire and Rescue Service (NIFRS) said: “At 2.56pm, the NIFRS was called to a report of a fire at a commercial premises on the Tattygare road, Lisbellaw.

“60 firefighters worked tirelessly to successfully prevent fire spreading to the adjoining buildings. Support for crews was provided by the Red Cross FESS vehicle.

“The fire was brought under control at 8.20pm by firefighters using breathing apparatus, jets and specialist equipment.

“20 firefighters remained at the scene for several hours to deal with localised hot spots of fire within the building. The cause of fire is under investigation.”

Firefighters came from all across Northern Ireland to tackle the blaze, including from Enniskillen, Lisnaskea, Clogher, Armagh, Fintona, Irvinestown, Belleek and Omagh.

“My thoughts are with them and their employees at this time. I hope nobody was hurt or injured and the damage isn’t too severe.

“As always, maith sibh (well done) to the fire and rescue teams!””

Commentary: Time to turn rest of US into innovation factory