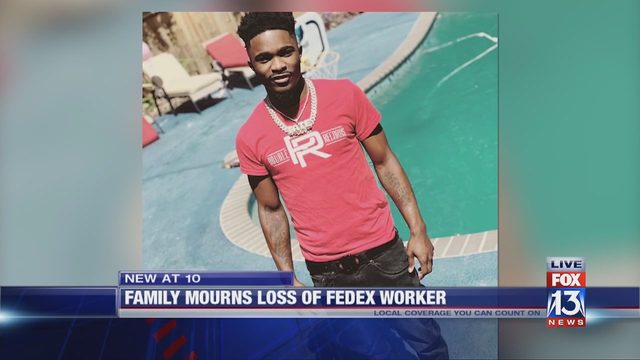 MEMPHIS, Tenn. – The family of a young man who died Wednesday at a FedEx hub is speaking out.

According to police, Duntate Young, 23, was transported to Regional One and was pronounced dead after arriving at the hospital.

The hub is located on the 3100 block of Democrat Road.

Young’s father, Reverend Leonell Troy McClenton, described to FOX13 how he found out about his son’s death.

“I woke up from my daughter. She heard from a friend that he was transported through the med. She was in tears about it and it sounded serious. When I made it to the hospital they pronounced him dead,” said McClenton.

Download the FOX13 Memphis app to receive alerts from breaking news in your neighborhood.

Young was a father of two sons and was eager to get off work on Wednesday and celebrate his son’s birthday, which was also Wednesday.

Young’s father told FOX13 he wants to know more about the details surrounding his son’s death.

McClenton said Young was contracted through a temp agency and worked on the dock during the graveyard shift at the FedEx World Hub for the past two months.

Police say they don’t have an explanation for how Young died, but are looking into his cause of death.

Young’s father told FOX13 he wants to know more about the details surrounding his son’s death saying, “we shouldn’t have to speculate… I want to know he was trained properly to the job properly.”

FedEx sent a statement which said:

“We are deeply saddened by the tragic loss of our team member at the Memphis hub.  Our thoughts are with our colleague’s family, friends and co-workers at this difficult time.  We are always focused on the health and safety of our people as a top priority, and we are fully cooperating with authorities in their investigation.”

At this time the cause of death is unknown.

This is an ongoing death investigation.

Iranian oil tanker’s cargo seized in Greece after US request

For some major shippers, 2019 ended on a sour note | Business