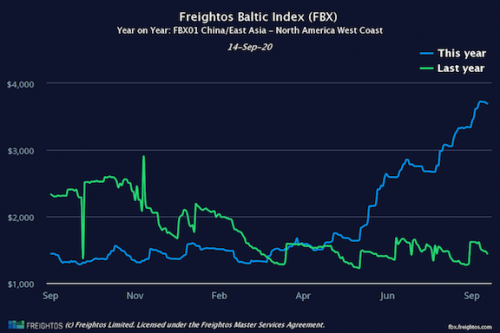 As you’ve heard over and over since June, ocean rates from China to the US have been climbing – with China to US East Coast rates approaching $4,500 per FEU and West Coast rate up nearly 160% over last year.

Though rates went largely unchanged this week, indications are that as peak volumes continue to outpace the full and even extra capacity in the water, carriers will introduce a mid-month General Rate Increase (GRI). This move would push rates up again and mark the seventh GRI since June 1st.

But late last week, initial reports surfaced that China’s Ministry of Transport (MOT) was considering a ban on China-US rate increases, with state-owned COSCO expected to cancel its GRI, and Maersk following suit.

And to ensure rates fall once demand eventually drops, the MOT may prevent carriers from cancelling sailings – a move that would reduce supply and prop up rates – starting after the early-October Golden Week.

The latest projections by the National Retail Federation have import volumes declining through October (though up year over year), so this rule may be tested sooner rather than later.

Whether more carriers follow COSCO’s lead, and the actual extent of the MOT discussion remains to be seen. But the US FMC and other industry groups are set to investigate soon as well.

Whatever the final rulings, the consideration of interventions shows just how extreme the last few months have been.

Capacity management is regulated, and is meant to prevent carrier losses when demand is low. During the pandemic it allowed carriers to keep rates even, up until the unexpected demand surge in June.

China log demand picks up on restart but not to last-year levels. Recent price bounce over quickly. All eyes on China’s domestic recovery. Neither India, nor domestic demand show much prospect