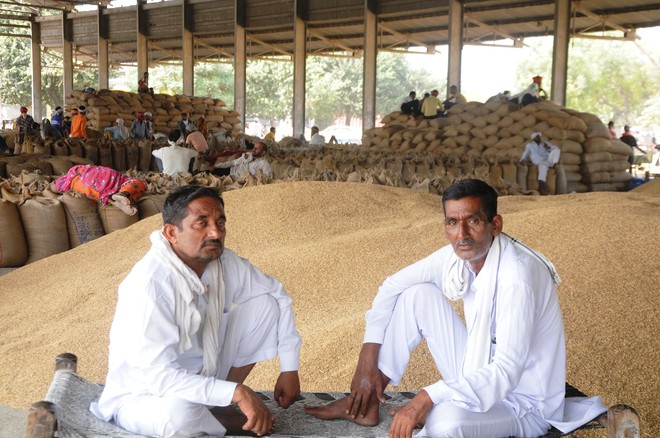 With arhtiyas boycotting the paddy procurement, farmers and procurement agencies are in a bind.

Their primary concern is who would procure paddy as rice millers have not registered themselves with the Food and Civil Supplies Department. Paddy is sold only to registered rice millers.

On Monday, the arhtiyas had announced that they would not register PR paddy with the market committee on their behalf, a condition made mandatory for farmers to sell their produce.

In case government agencies procure paddy, arhtiyas ask, what provisions have been made for lifting and storing the produce.

“Officially, paddy procurement has started. But there is no clarity on two points: who will procure the produce and where will paddy be stored. The government claims to procure the produce, but it’s been four days that farmers have been waiting for the government to honour its word,” said Rajnish Chaudhary, president, Karnal Arhtiyas Association.

Arhtiyas are also demanding a revision in the limit on bringing the produce to the grain market. At present, a farmer can bring 25 quintals per acre to a grain market. Arhtiyas, however, are demanding the limit be raised up to 40 quintals.

Their third demand concerns Uttar Pradesh farmers, who have been stopped from bringing their produce to the grain markets of Karnal district. “Farmers from UP have borrowed money from us. So they should be allowed entry in grain markets of the district,” Chaudhary said.

Meanwhile, only 120 quintals of paddy was procured by the Food and Civil Supplies Department on Tuesday.

“Not a single grain of my produce has been procured in the past there days. The arhtiyas’ decision not to register paddy has added to farmers’ woes,” said Jasmer Singh, a farmer sitting beside the heap of his unsold paddy in the grain market here.

Another farmer Arjun Singh pleaded with the state government to start procurement in reality, and not on paper.

Contractor says 80,000 tons of Palace of Auburn Hills material will be reused, recycled

Trans-Hit Biomarkers Announces Today a Partnership With Nexelis, Supporting Sample Procurement Activities for a Number of Strategic Projects Including COVID-19...

OEM and industry partners hit the road to collect material