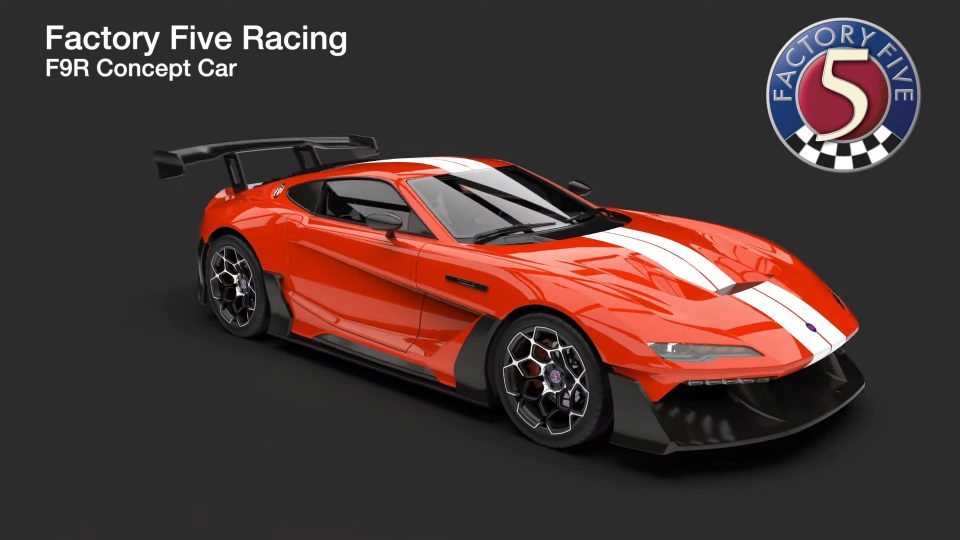 Factory Five Racing, famed fabricators of kit cars based on the Shelby Daytona and Cobra models, are building a new, original hypercar. Its massive 9.5-liter, 750 horsepower LS Series V-12 debuted in a display chassis at the SEMA show a few months ago, but Factory Five revealed more details about it in a recent blog post, including what the design will look like.

Dubbed the F9 and F9R for the road and track variants respectively, this concept is intended to be the true successor to Factory Five’s GTM supercar kit. The body is made entirely of carbon fiber, which will aid the company’s target weight of under 2,400 pounds. Imagine stuffing a V-12 with 750 horsepower and 700 pound-feet or torque in an Alfa Romeo 4C—this would be the result. The F9 will still honor the kit car company’s “built not bought” philosophy, however, and will also accept Ford small block motors if the LS-based 12-cylinder doesn’t suit your needs.

The car’s Aston Martin Vulcan-like looks were penned in part by Phil Frank, one of the designers responsible for the Saleen S7. He and Jim Schenck were originally brought in to work on the GTF concept, which would serve as a test bed for the company’s first digitally designed parts. In the end the GTF project was scrapped, and efforts shifted to create a new car for the customer, not the company.

Pricing isn’t yet known, but its predecessor’s kit starts at nearly $25,000 for the chassis and body parts, so expect the F9’s components to be in the same ball park. It remains a conceptual design for now, but Factory Five plans to finalize the styling early next year and begin testing in the spring.  Production is slated to begin in late 2020 or the beginning of 2021.

Analysts take a look at Clean Harbors, Inc. (NYSE:CLH) having this to say.