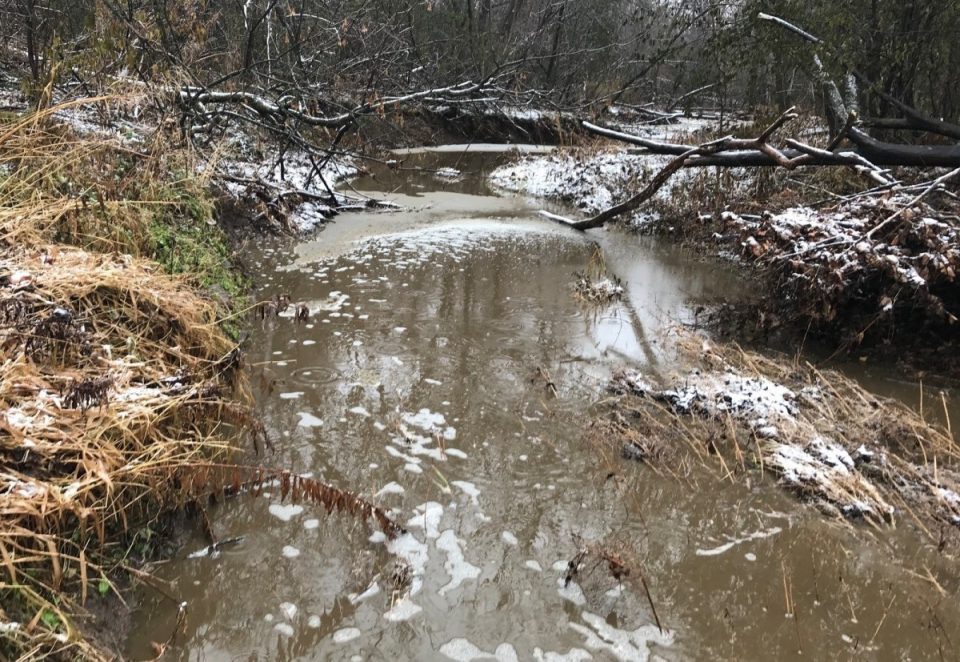 Waste from a confined animal feeding operation in western Wisconsin polluted a nearby creek in November, according to a recent report released by the Department of Natural Resources.

The incident occurred after workers from Emerald Sky Dairy north of Woodville spread manure on a harvested corn field as part of routine operations.

“It is time to revisit the CAFO model and practices in our country,” said Kim Dupre, who is involved in protecting water in St. Croix County and first shared the spill report.

According to the report, DNR CAFO Specialist Jeff Jackson happened to be at at the farm on Nov. 20 for a routine inspection when manure was being spread. He noted that, while the field had been planted entirely in corn the previous season, it appeared to have once had grassy strips that let water move downhill through it.

Some of those old channels now appeared to be making it easier for the manure to move. None were designated as “surface water conduits,” which would have required a 25-foot setback for manure spreading, though Jackson noted perhaps some of the strips should be added to the restricted map.

It’s also possible that wet weather and cold soil were part of the problem. Jackson said the soil was “damp and somewhat stiff but didn’t appear frozen.”

The state of Wisconsin provides an online tool with daily forecasts to help farm workers know when it’s safe to spread manure on fields. It’s based on precipitation and soil conditions, including if the ground is frozen.

In the week leading up to Nov. 20, the area had a “severe” risk of runoff. The day of the spill and the next day were wetter and warmer, though the risk was still considered severe. It was followed by a stretch when the state said it was safer to spread manure.

With the company applying 11,000-13,000 gallons of manure per acre, Jackson said he saw signs the ground was not fully absorbing the material, so he asked the workers to reduce the rate and till more soil at the bottom of the slope to slow down runoff.

Emerald Sky said it would comply with the requests and Jackson left around midday. They later sent photos of the additional tilled soil, and assured him they would monitor the runoff.

In less than 24 hours, Jackson was back, and there was a problem.

During the night, an anonymous citizen reported manure flowing down the ditch next to County Highway G to the State Patrol, which relayed it to the DNR. Jackson and local DNR wardens Isaac Kruse and Paul Sickman got to the Highway G bridge over Hutton Creek at 8:45 a.m.

“Manure laden water entering Hutton Creek was brown, turbid, and smelled of manure,” the DNR’s report reads. “There was also an abundance of white foam developing at the confluence of the road ditch channel and Hutton Creek.”

Such foam can indicate methane and other gasses in decaying manure.

Further searching over the following days by DNR Fisheries staff did not find any more dead fish farther downstream. Hutton Creek is designated as a Class II trout stream, which means there may be some natural trout reproduction, but it requires stocking. The DNR reported no signs of trout.

Jackson took water samples of Hutton Creek above the manure spill and at three points below. Lab tests later showed high levels of bacteria, nitrogen, phosphorus, and other contaminants in the samples below the Highway G bridge.

Surveying the field where the manure had been spread, Jackson noted it appeared the manure was flowing downhill along one of the old channels from a grass strip that he had noted the day before.

Emerald Sky Dairy is home to more than 3,000 dairy cows and is one of a few CAFOs located in the St. Croix River’s watershed. It was purchased by a new owner, Todd Tuls in early 2016. His family also owns large dairies in Nebraska and southern Wisconsin.

Shortly after buying the operation, Tuls had proposed to double the capacity of the CAFO, though it appears the plan was later dropped.

The Emerald operation has had previous problems, including what was described as a “massive” manure spill into neighboring creeks, wetlands, and a pond in the winter of 2016-2017

After the spill, neighbors discovered high levels of the bacteria E.coli in their well water.

“This is fourth time in less than four years that the Wisconsin DNR has been involved with improper spreading or spills at Emerald Sky Dairy,” said Virginia Drath, a resident of Emerald. “What will it take to change their behavior? Are the fines not large enough to impact their practices? This is so frustrating for neighbors to see violation after violation and nothing changes.”

The manure spill was only reported to the DNR months after it began, when an anonymous tipster contacted authorities. The most recent incident was also reported by a member of the public, not the operators.

CAFO operators are required to report manure spills immediately to the DNR. Anyone can report a spill by calling the 24-hour spill emergency hotline at 1-800-943-0003.

Shortly after arriving at the site the next day, the DNR instructed Emerald Sky Dairy employees to take several actions to stop the flow of manure into the creek.

Workers built an earthen berm and placed straw bales in the ditch to hold back the runoff, and contacted a septic hauler to remove as much of the manure as possible. They also plowed the affected fields to help the soil absorb more of the manure that was still visible on the surface.

“All these actions were important steps in reducing runoff flow to the grass waterway, road ditch, and Hutton Creek,” the DNR reported.

All CAFO operators like Emerald Sky Dairy are required by Wisconsin law to obtain a Wisconsin Pollution Discharge Elimination System permit. The rules contain a long list of regulations to prevent manure runoff and spills. Any manure runoff is prohibited, except in the case of a major rainstorm.

“Manure or process wastewater may not run off the application site nor discharge to waters of the state through subsurface drains due to precipitation or snowmelt except if the permittee has complied with all land application restrictions … and the runoff or discharge occurs as a result of a rain event that is equal to or greater than a 25-year, 24-hour rain event,” the regulations say.

DNR CAFO specialist Jackson noted in his report that there was a trace amount of precipitation the day of the manure application. The next day, when he responded to the spill report, there was about one-third of an inch of rain. The standard for a 25-year, 24-hour storm event in the area is 5.1 inches of precipitation.

If a CAFO violates the rules, the Wisconsin DNR can modify, suspend, or revoke its permit, refer cases to state prosecutors, and require compensation for damages to natural resources.

‘Fairness in the Factory But on the Farm,’ Too, Textile Experts Say