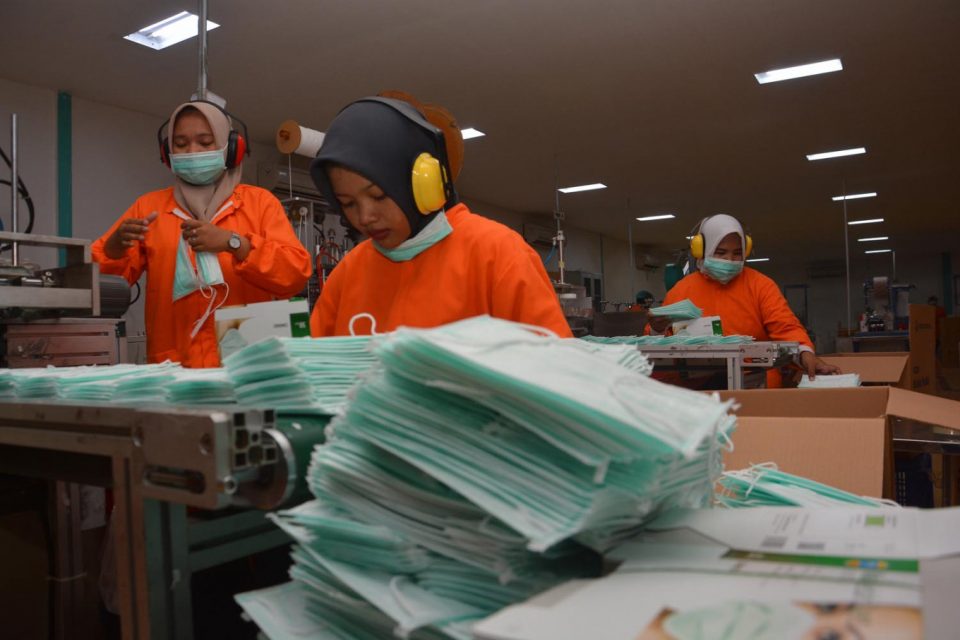 Factory activity in Indonesia showed signs of improvement in the third quarter after recording the deepest slump ever in the previous quarter, as the reopening of the economy jacked up output and new orders, according to a Bank Indonesia (BI) survey.

Index readings below 50 percent indicate a contraction, while those above 50 percent signify an expansion.

“Although manufacturing activity remains in a contractionary phase, the PMI-BI shows that the performance has improved,” the central bank said in the survey released on Wednesday.

“The implementation of [relaxed restrictions] has boosted demand and eased distribution.”

The central bank survey shows that all subindices, including overall output and new orders, rose for the first time since the fourth quarter last year.

The government has lifted large-scale social restrictions (PSBB) implemented in some provinces in the second quarter of this year, but the recent rise in virus cases had prompted the Jakarta administration to temporarily reinstate the restrictions.

The manufacturing industry contributed around 19 percent to Indonesia’s gross domestic product (GDP), the highest among all business sectors, and contracted 6.19 percent in the second quarter this year as a result of cooling domestic and global economic activity due to the coronavirus pandemic.

Indonesia’s economy, meanwhile, shrank by 5.32 percent year-on-year in the second quarter and is widely expected to contract further in the July-September period, which would mark the country’s first recession since the 1998 Asian financial crisis.

Previously, the manufacturing gauge Purchasing Managers’ Index (PMI) survey data published by HIS Markit showed that manufacturing activity declined in September as Jakarta reinstated the PSBB for around a month. The PMI fell nearly four points from 50.8 in August to 47.2 in September as business output and new orders fell.

“The latest PMI numbers suggest that the Indonesian manufacturing sector faces challenging operating conditions in the months ahead,” IHS Markit principal economist Bernard Aw said in a statement recently. “Whether a robust recovery will take root depends to a large extent on the country’s ability to bring the pandemic under control.”

The PMI-BI data was the latest sign that the economy headed into recession in the third quarter, said Mirae Asset Sekuritas Indonesia economist Anthony Kevin, adding the manufacturing was likely to contract further in the fourth quarter as consumption remained subdued.

“The main risk is that manufacturers could increase goods prices due to weakening rupiah exchange rate and that, combined with weak purchasing power because of the prolonged pandemic, could depress manufacturing activity going forward,” he told The Jakarta Post. “Furthermore, potential outbreaks that occurred in factories could further hit manufacturing.”

Indonesia should get a grip on the coronavirus pandemic to ensure healthy recovery in economic sectors including manufacturing, he went on to say, adding the uncertainty surrounding vaccines should have prompted the government to ramp up efforts in curbing the virus spread.