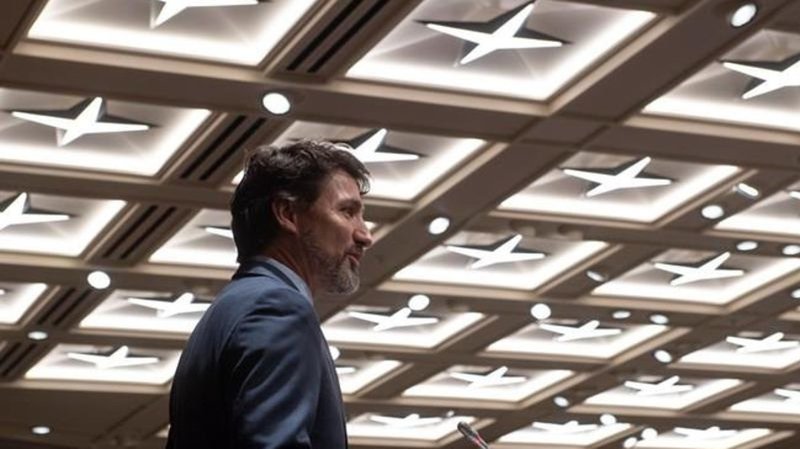 Trudeau’s government will need support from at least one of the major opposition parties to pass legislation and survive confidence votes on matters like the upcoming budget. And Trudeau said it’s up to Liberals to make it work.

“Bickering, grandstanding, petty politics — none of these things create jobs. They don’t make anyone’s retirement safer, or our environment cleaner. Collaboration, dialogue, and constructive debate, however, can … Common ground does exist in this Parliament but it’s up to us to build on it.”

The government faces opposition pushback to its agenda right out of the gate.

The top priority for the government is ratifying the new North American free-trade agreement, with legislation to be introduced next week. Trudeau wants ratification as quickly as possible to secure the deal, on which he said millions of Canadian jobs depend.

But the Bloc Quebecois and NDP have signalled that they’re in no rush to finalize the continental trade pact, which has already been ratified by the United States and Mexico. They want the deal to be studied in depth at committee and debated thoroughly in the Commons.

The Conservatives are ardent free-traders in general but have accused Trudeau of caving into U.S. President Donald Trump’s demands on the new NAFTA. It is not clear yet whether they’ll support quick ratification or join demands for lengthy debate.

Trudeau welcomed debate and committee study but said: “We need to make sure that we move resolutely and rapidly to put into reality this new NAFTA deal that is so good for Canadians from coast to coast to coast.”

In an appeal for cross-party solidarity, Trudeau thanked opposition parties for adopting a non-partisan “Team Canada” approach to the renegotiation of NAFTA in the face of Trump’s threats to scrap the pact altogether.

The Liberals’ agenda also includes action on a promised ban on military-style assault rifles, strengthening health care, battling climate change, and seeking meaningful reconciliation with Indigenous Peoples. The government also intends to introduce next month amendments to the law governing medical assistance in dying, in response to a Quebec court ruling that invalidated the law’s limitation that only people who are near death can qualify for medical help to end their lives.

Minority status means Trudeau and his ministers will have to pay more attention to their own backbenchers as they prepare legislation, to head off any incipient revolts.

It was evident Thursday that the assault-weapon ban is one issue that will require some massaging to maintain unity within Liberal ranks. At least two MPs said they had questions on behalf of their rural constituents and that they wanted to hear more on the government’s plans.

“I have in my briefcase here, probably a hundred letters, not many from my own riding, opposed to it, and I expect if you’re in the urban areas members would be getting letters saying they support it … so it is a controversial issue.”

Public Safety Minister Bill Blair said he welcomes the input of MPs. He argued that everyone is “completely united” in wanting to keep Canadians safe, although there can be disagreements over how best to go about that.

Still, Blair made it clear that as far as he is concerned, there is no urban-rural divide over the issue.

“I don’t believe anyone in this country needs a military-style weapon, except soldiers.”

Toronto MP Nathaniel Erskine-Smith — who developed a reputation during Trudeau’s first mandate as something of a free-thinker who was not afraid to vote against the party line — said he doesn’t think he needs to change his approach now that Trudeau is in a minority situation where he’ll want every Liberal vote on every initiative.

He noted that Trudeau requires backbenchers to support the government only on matters of confidence, platform promises and issues involving human rights.

“There’s a lot of freedom beyond that and I’ll continue to exercise that freedom,” he said.

On the other hand, Erskine-Smith said he expects Trudeau and his ministers will spend a lot more time consulting with backbenchers and mitigating their concerns before introducing new initiatives.

“Every vote matters in a minority Parliament and so I think it’s especially important, and I have felt this already, that the government ministers are very proactively reaching out on the files that matter to us as MPs. So I’m hoping that that continues.”

This report by The Canadian Press was first published Jan. 23, 2020.

Project Back on Track India, an aspiration to create Pithoragarh (Uttarakhand) as India’s new back office