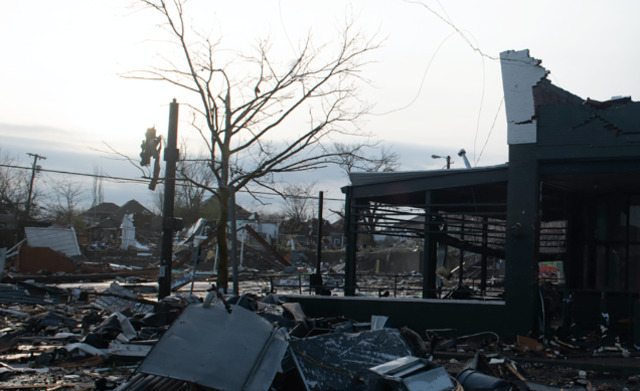 It was an unseasonably warm Monday night for Myers Lambert, an assistant manager who works the night shift for Best Brands, the longtime beer, wine and liquor distributor tucked in a corrugated metal warehouse just a thousand feet from where the Cumberland River turns north to create Cockrill Bend.

Lambert and the 20 other employees had no idea that the strong line of storms coming their way would hook and drop a tornado on them, marking ground zero of what would become a 50-mile churned path of destruction.

Lambert didn’t have his phone with him — it was charging at his desk — but it wouldn’t have made a difference. Nobody in the warehouse got an alert or heard a siren.

“We heard the loud noise everyone talks about. I looked at the window and the rain was sideways,” Lambert said.

Seconds later, the men on the dock who were loading trucks with cases and kegs for the Tuesday-morning deliveries came sprinting towards him. That’s when the lights went out and winds began to peel away the warehouse roof and bend the steel girders.

“It was pitch black. I had to go by memory to find a desk to get under. Then in like five seconds, it was over,” Lambert said, noting that the warning arrived on workers’ phones after the tornado had passed. What he didn’t know until he emerged from the building was that the 300,000-square-foot warehouse right next door had been wind-scraped from the earth.

Discussions now turn to the economic disruption natural disasters wreak on businesses and communities. For the hospitality industry, it’s not just the restaurants that are closed due to destruction or loss of power and it’s not just the human toll of displaced workers. In the case of this monster storm, a number of the large businesses that service the restaurants and hotels — companies such as Best Brands and industry giants such as food distributor Sysco — were also damaged, creating an enormous supply-chain schism.

The day after the tornado, the Nashville Hospitality Professionals FaceBook page was awash with concerns and questions. That’s where the news hit about Best Brands, Sysco and Aramark (chef wear) in Cockrill Bend and Restaurant Depot further east. A look at a map of the tornado’s path shows a straight line that improbably connects all those businesses.

For restaurants, waiting on repairs and suppliers can be an agonizing lull. For every business that lost power, all of the perishables had to be tossed. Sophia Vaughan, owner of Silver Sands Cafe in North Nashville, said a Metro Health Inspector had already come by on foot to make sure they weren’t serving anything from their walk-in cooler. “Can you imagine? He was nice though,” Vaughan said.

Hal Holden-Bache, chef and owner of Lockeland Table in East Nashville, is anxious to get up and running again. He has secured a generator so the restaurant’s walk-in cooler can be used and his team are cooking for staff, neighbors and others groups in need. An email from Sysco said the company won’t be able to deliver again until March 14 at the earliest as the company looks to Memphis, Knoxville and Louisville for support.

It’s not just loss of power but loss of life that has hit Lockeland Table especially hard. Albree Sexton, who was killed that dark Tuesday morning, was working as a server at Lockeland Table and had made a big impact in her brief tenure there.

“We brought in a grief counselor to meet with all of us. It’s been hard,” Holden-Bache said.

With full power restoration not expected for another couple of days, Holden-Bache is rewriting menus to accommodate the loss of access to certain foods. He’s also lending cooler space to his neighbor Italia and marvels at the community response.

“U.S. Foods delivered 2,000 pounds of donated food to the Nashville Food Project for restaurants to use to prepare meals for the community. That is what Nashville is all about,” he said.

While other companies can help pick up the slack, many brands of food, beer, wine and liquor are distributor-specific. Businesses worry that if they are down and unable to deliver, customers may switch to other brands and distributors.

Jason Eskind, whose family has owned Best Brands and and its predecessor for four generations, said, “We really found out who are friends are.” His warehouse is destroyed but a call from Scott Turner, owner of competitor Ajax Turner came with an offer to lease a new, larger facility that Turner owned.

With insurance maxed out, getting back up to speed quickly is paramount to any business’ prospects for success. Having new space will allow Best Brands to hopefully be back to 80 percent by next week and 100 percent the week after that.

While deeply appreciative of Turner’s generosity, Eskind got emotional talking about the human toll. He mentioned Sexton and Michael Dolfini, two bartenders and customers, who lost their lives. He talked about his shipping and receiving coordinator Dena Woodard, who lost everything in the tornado. And he talked about the hourly employees he keeps on the payroll.

“The cost doesn’t matter. I want to keep them,” he said. “They’re being paid to stay home and call every day asking when they can come back to help.”

Jim Myers is a Nashville-based writer who has covered the food and drink industry for more than 20 years.

Procurement Leaders moves event to the fall as a coronavirus precaution

Lime to ‘juicers’: The gig is up

Walmart to Invest $14B in Automation, Supply Chain