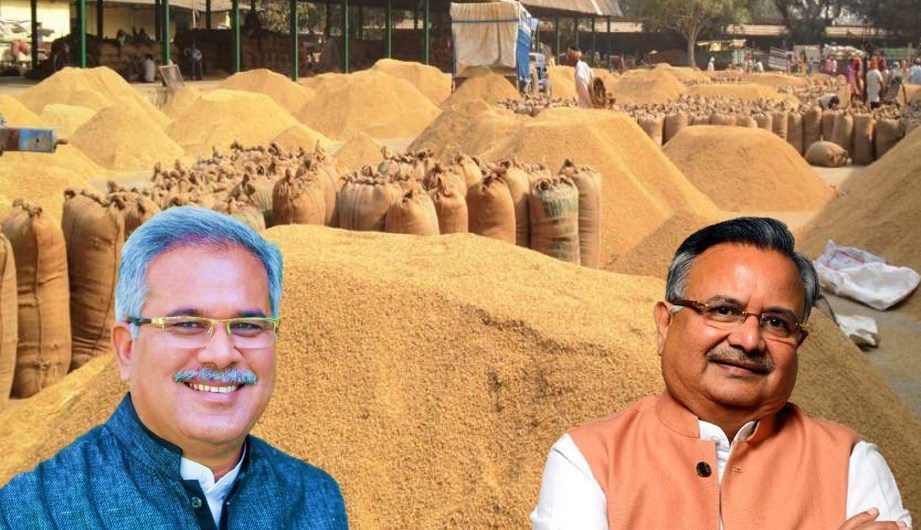 While farmer protests are not waning in Delhi, a political thunderstorm is taking place in the state of Chhattisgarh where CM Bhupesh Baghel and ex-CM Dr Raman Singh are at loggerheads on the question of mismanagement in paddy procurement. At many places, paddy procurement has been stopped due to allegedly shortage of tare and store capacities. BJP has alleged that Congress has failed to deliver its promise of buying farmers produce at Rs. 2500/- quintal MSP while Congress has blamed BJP for creating confusion.

How was management in BJP era?

When Dr. Raman Singh promised to provide rice at Rs. 3 per kilo (later Rs 1 per kilo) to lakhs of families, it was considered an extra-ordinary political stroke, likes of which later inspired the Food Security Bill in UPA era. It was a huge success only because of a robust PDS system which was developed over time. It also created debt. The Govt borrowed money from RBI at zero interest if it is repaid in four months, so to save interest, they developed a system where paddy was procured quickly within four months, thus saving money on interest.

They used to provide immediate supply to Food Corporation of India (FCI) in comparison to other states and the remaining was directly supplied to ration shops with three months surplus. Tax collection on excise duty also increased five times from 2004. With increased Computerization, payment to farmers was also swift and Chhattisgarh used to procure about 80% of grains produced in comparison to about 20% in other states.

During election campaign of 2018, Congress promised to pay Rs. 2500 per quintal as MSP to farmers instead of Rs. 1825 as then declared by centre, which proved a key factor to win them elections.  Although Raman Singh in previous years had also offered to pay Rs. 300 as bonus increasing MSP to Rs. 2100, it was disallowed by Central Govt when Modi came in power.

Modi Govt has a policy of ‘no bonus’ but instead they increased the MSP over years. Hence, in order to meet the poll promise, CM Bhupesh Baghel offered to pay the difference of Rs. 675 per quintal out of state exchequer’s pocket. But this was again considered as bonus with a different avatar and FCI refused to lift grains from the state.

Last month, Bhupesh Baghel had written to the Prime Minister asking to pick up the paddy the state government has procured under the central pool. But the centre had clarified that FCI can’t pick up paddy beyond the limit of 24 lakh tonnes as the state has declared bonus above the MSP. According to MOU the centre has signed with states and UTs in regard of crop procurement, if the states and UTs announce bonus above MSP, FCI will not procure crop beyond a fixed quantity, and the rest has to be procured by the states/UTs themselves.

As a result, the mandis had an overflow of grains and officials were not able to accommodate the excess supply from farmers. At many places, the procurement was halted citing a shortage of tare and farmers were asked to bring their own sacks for storage or were simply returned.

Bhupesh Baghel Govt declared that Congress Govt is giving more money to farmers under a different scheme called Rajiv Gandhi Kisan Nyay Yojana where they are giving Rs. 10000 per acre to sugarcane, maize and paddy farmers, thereby effectively increasing MSP but not technically so. After things reached crisis level, communication was established between centre and state and FCI promised to pick up 24 lakh MT for which CM thanked the PM and hoped they would take more (60 LMT) as assured earlier.

But the political storm had already taken place in Raipur where Congress has blamed BJP for acting against the interest of farmers and BJP has alleged mismanagement in the procurement process. Dr Raman Singh has questioned – why did Congress promise to buy every grain at Rs. 2500 on its own when it cannot fulfil its own promise and is now running to the centre for aid and making excuses. He also asked why has Congress Govt not been able to fulfil its pending quota of 24LMT of last year, and alleged a complete collapse of the system.

Whereas Congress has alleged that Centre is advised by state BJP Unit which is creating obstacles in procurement process. When BJP in-charge of Chhattisgarh D. Purandeshwari asked what happened to the Rs. 9000 crore facilitated by Centre for procurement process, the Congress leaders deflected it as loan by Markfed and not aid by the Centre. Bhupesh Baghel also dared BJP to stage a protest in Delhi, while Dr. Raman Singh pointed out a complete collapse of system.

Former Home Minister Brijmohan Agrawal also questioned that while Congress is busy in blame game, grains worth crores have been wasted because they were not procured. CM Bhupesh also lost his temper and said “Raman Singh ko murkho jaisi baatein nahi karni chaiye” (Raman Singh should not speak like idiots). But it appears that war of words between the two parties is not de-escalating.

Any delay in procurement causes an increase interest which is ultimately borne by state exchequer. With a lucrative promised MSP by Congress before the election, the number of farmers registered to sell paddy has almost doubled form 15 lakh in BJP era to 31.5 lakhs now. This is likely to cause an extra burden on state and debt is likely to rise. Crop rotation has now stopped because farmers are incentivised to grow only paddy which gets a plum MSP. As a result, health of soil is believed to take a toll.

There are also cases of smuggling in border areas with UP and Jharkhand where farmers sell to middlemen in cheaper prices in order to obtain the MSP in Chhattisgarh. Reportedly, there are some fraudulent committees involved in Govt procurement process and they are continued to do so this year and questions are asked whether it reeks of a scam. Moreover, does it make sense to buy grains at a very high MSP and sell them in PDS for Rs. 1 per kilo? The difference to be paid by state tax is huge and is at the cost of many other development activities which could have otherwise propelled the state to a more progressive one.

Ontex Due For A Turnaround Due To Brazil And Raw Materials – Ontex Group NV ADR (OTCMKTS:ONXYY)