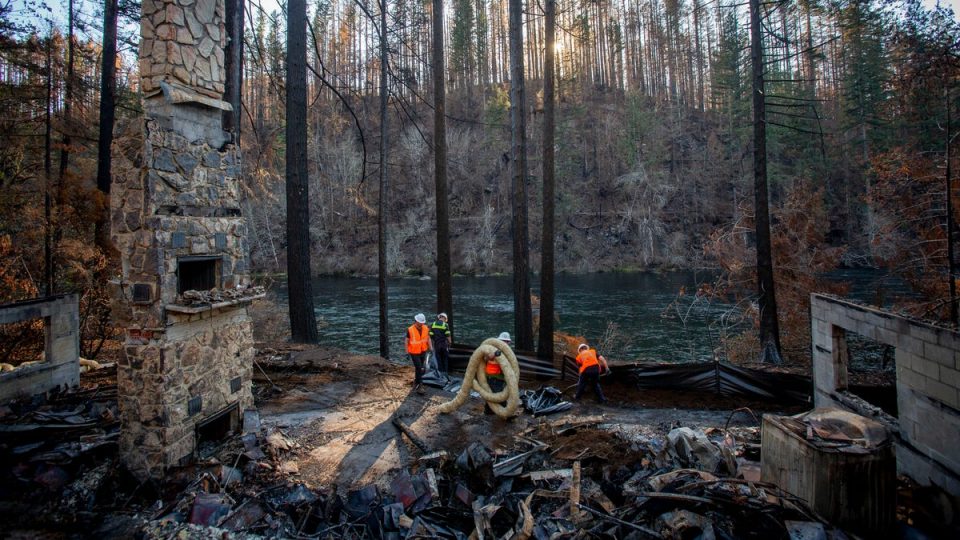 The clanking sound of charred metal being pushed into a pile on the land above the McKenzie River is jarring compared to the usual calm burble of the fast-moving waters. But the unfortunate reality is there is nothing usual about the work being done at this riverside residence destroyed in the Holiday Farm Fire.

Workers contracted by the Eugene Water and Electric Board are working house-to-house along the fire-ravaged McKenzie River in the utility’s effort to mitigate the impact of debris along Eugene’s critical drinking water source. About 150 homes have been identified by EWEB for hazardous material stabilization and temporary erosion control based on their locations next to the river. The work is being done at no cost to landowners and inclusion in the program is voluntary.

A total of 431 homes were destroyed in the Holiday Farm Fire that started Labor Day and burned 173,393 acres.

Debris in destroyed homes can contain a mix of contaminants including heavy metals and asbestos, so ensuring runoff is controlled and lessened is critical.

“The homes right on the waterway pose the highest degree of threat to our water quality,” said Karl Morgenstern, EWEB water quality supervisor.

The triaged areas are the focus of the contractors who can work on multiple houses each day.

Contractors search the remains of each home for obvious hazardous items like propane tanks and remove them. Ash, roofing and other materials outside the home are then pushed into the home’s structural footprint with the interior debris to keep it contained.

The next step is erecting barriers to keep water from flowing from the debris into the river. A fence of heavy black plastic is first erected closest to the river. Dirt placed at the foot of the fence ensures water does not flow underneath. A straw wattle, a fiber roll filled with straw used as temporary erosion and sediment control, is then placed closest to the home to further ensure potential contaminants are kept from flowing into the river.

Placing barriers and piling debris is the first step of what is a multifaceted restoration process for EWEB. It is working with the local partners to conduct burn assessments on properties and will work with homeowners to design erosion control strategies along riverfront and on other properties in the watershed.

Since 2018, EWEB has been working with landowners in its Pure Water Partners program to enhance the riparian zone along the McKenzie River. The fire has impacted many of those partnerships and the relationship built in the last two years.

“We have 90 landowners we already have relationships with that we are able to work with right off the bat. We know them and already have access agreements in place so those that got impacted by the fire are the first ones we are out helping,” Morgenstern said.

The McKenzie Watershed Council, McKenzie River Trust and the Upper Willamette Soil and Conservation District pivoted after the fire from doing riparian health assessments to conducting burn assessments. They also are designing the erosion control plans instead of the pre-fire restoration work.

EWEB has been monitoring the effects of the fire on water quality since the start of the fire and during recent storms. The utility saw very little organic contamination in the water, Morgenstern said.

Heavier seasonal rains in the fire-affected watershed could result in adverse conditions in the river but Morgenstern is confident the quality of the water delivered to customers will be unaffected.

“The Hayden Bridge treatment plant is pretty well equipped to deal with whatever comes this winter,” Morgenstern said.

Early warning systems give operators plenty of time to adjust what they are pulling from the river if there is a spike in turbidity or organic carbons. They are also able to use activated carbon and other filtering processes to eliminate impurities.

EWEB is not the agency in charge of final removal of hazardous waste or debris from homes. The state of Oregon’s Debris Management Task Force is overseeing a coordinated effort by federal, state, and local government agencies to address hazardous waste and debris removal.

Serious about salt: It keeps our roads ice-free but how can we keep it from killing our lakes?

Here’s where to recycle your used Christmas tree