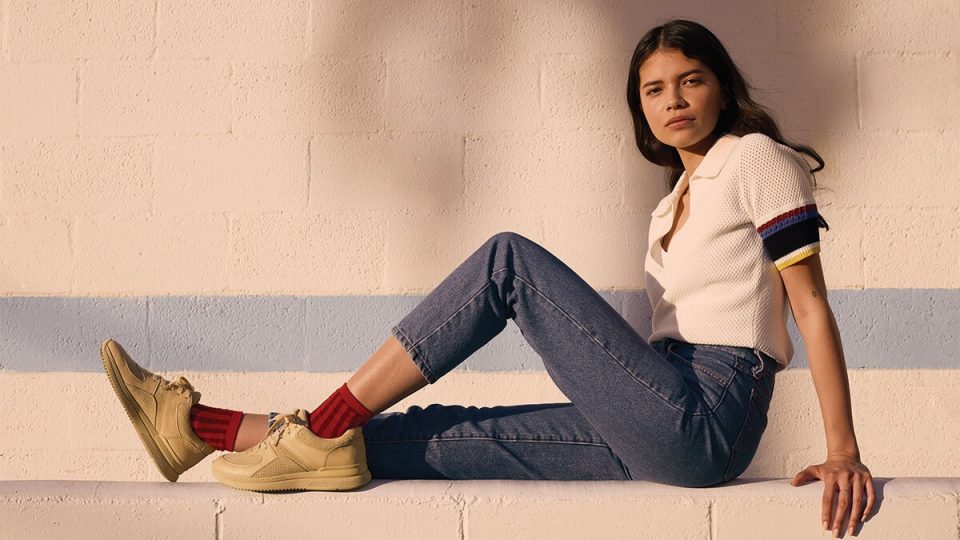 In October 2018, Everlane announced plans to eliminate all virgin plastics from its supply chain by 2021. One year in, the brand is three-quarters of the way toward achieving that goal.

According to Everlane, 75 per cent of the plastics the company uses — which primarily come from polyester, nylon and elastane used in its outerwear, underwear and some sweaters — are now recycled, a process that has required “time, energy and relationship building”, according to chief executive Michael Preysman. Nearly half of its shoes are now made using recycled substances, and virgin plastic has been replaced with recycled plastic in the poly bags used for shipping and distribution. Plastic is removed altogether from some garments during shipping. Preysman says that the brand continues to prioritise natural materials — plastic makes up 10 per cent of the materials the brand uses in products overall, according to Everlane — and recently introduced a recycled cashmere line.

And what of the remaining 25 per cent? For Everlane, fabrics like spandex and elastane currently can’t be replaced with recycled materials because no alternatives exist in the market. “Hidden plastics” at the factory level remain a small but lingering obstacle. Still, Preysman maintains the goal to hit 100 per cent recycled plastics by 2021.

Next week, the company will push this agenda into the policy arena, partnering through its Black Friday Fund with non-profit Oceana to advocate for policies to eliminate the production of single-use plastics. For every order placed on Black Friday, Everlane will donate $10 to support Oceana’s efforts to campaign and engage voters and lawmakers on the importance of bills like California’s SB 54 and AB 1080, which are focused on reducing single-use plastic packaging and more effectively managing the waste that remains. The goal is to raise $300,000, which would fund the campaign work in three major markets.

The strategy of working from the ground up, rather than the top down, is crucial, says Preysman. Here, he discusses the challenges of developing a more sustainable supply chain, what other companies can do, and why government lobbying is the right next step. Answers have been condensed and lightly edited for clarity.

How do you work with suppliers to develop materials that can incorporate recycled plastic? Is it a simple drop-in substitute, or do suppliers need to use different equipment?

Like trying to get better at anything, it’s practice. It’s a lot of visits to factories overseas in Taiwan, Sri Lanka, Vietnam, China, Italy — it turns out Italy’s doing quite a bit on this front. That’s where things like ReCashmere comes from.

For Everlane, a key challenge is maintaining the quality of the products with renewable materials.

We have a fabric development team, which a lot of [companies] have, but our team [works with] significantly fewer fabrics than others. As a result, we push more on the innovation side of the fabric development, trying to get suppliers to come to a standard that we’re developing. We push them to say what happens if you replace it with this. It’s a lot of hands-on development.

It’s not really new equipment. It is washing, it is how you spin it, the speed that you might spin. It’s all the dials you might change — like when you’re cooking, the spices you might change, and how you mix it, how long you cook it, all of that.

How do the costs of recycled and virgin plastic compare?

There’s been some debate about whether virgin or recycled is cheaper. For us, it is always more expensive — 5 to 10 per cent more — because it’s harder to get the quality.

The real challenge is how do we maintain the integrity, quality and hand-feel of what people get with virgin, but do it with renewed material. In footwear, in particular, it’s really hard to do non-virgin plastic because it’s just not that readily available. And the lightness that people like in a shoe, they can’t get out of recycled. I would say it’s the hardest in footwear, but it also is not easy in apparel.

What lessons or insight can you share for other companies?

Find the 10 to 20 mills that specialise in this. And know that whatever you’re doing that has virgin [plastics] – unless it’s elastane – can be replaced. It’s all possible; it just takes finding the right mill partner.

Do you open-source the process for a fabric once you develop it?

In some cases, we will have a one- to two-year relationship on a specific fabric [that we developed with a third-party mill] as an exclusive so that we can build momentum and work on the marketing. Then it gets released so that other people can use it as well. But I would say the innovation is just focus and time. If you’re doing genetic health-based work or developing new drugs and getting approval with the FDA, that’s real, long-term R&D. This is not that level of R&D. This is getting somebody to change the materials in their baseline, and then working with them to get the quality back up to what it was.

Is Everlane doing any work to study or mitigate the problem of microfibres shedding from plastic-based garments when they’re washed?

We are a little in that [we try to move] toward biodegradable. But in the apparel supply chain, for us, reducing the use of virgin plastic is the main priority. Jackets don’t get washed that much, and when we think about what’s impacting the ocean, microplastics are the real problem, more than microfibres. It’s [things like] plastic bottles and other plastic pollution — that plastic breaks down into microplastics in the ocean.

How did your partnership with Oceana come about? Is Everlane itself engaging in lobbying or policy work?

We wanted to find a partner that shares our focus. Both plastic production and recycling are going to be moved by government and policy. Companies like us can make a difference, but we’re a very small portion of the overall supply chain. The opportunity we have as an institution is to help support and push the agenda, moving the world toward more renewable resources and using less virgin plastic overall.

Corporations will use the cheapest means possible so that they can make more profit. They’re not going to change that much unless the government comes in. That kind of change has to happen on a local level, which is why we’re supporting Oceana — they’re not trying to change the US government. They’re trying to push policy city by city. Because if you can change it on a city level, corporations have to adapt in those cities, and then they say ‘Fine, we’ll adapt across the board’. They’re not going to run two supply chains, one with virgin and one with non-virgin plastic, or one with less and one with more plastic.

It’s no different from the kind of work that Republicans and Democrats are out there doing right now — you start on a city level, go to a state level, go to a national level. And we’re a huge believer in on-the-ground grassroots change.

Do you have any concerns that speaking out or engaging in this way will drive some consumers away?

This is not a political issue to us; it’s not a partisan issue. It’s strictly a climate issue. If customers don’t want us to be focused on climate, they can shop somewhere else.

To receive the Vogue Business newsletter, sign up here.

Comments, questions or feedback? Email us at [email protected].

More from this author:

Fashion’s fight to phase out plastics