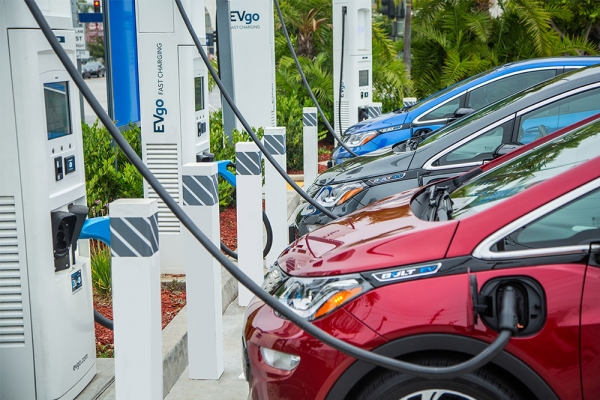 “It is our longer-term future, but I must also say that I don’t expect the internal combustion engine on a pickup truck is going away anytime soon,” said Pat Greene, president of Grand Rapids-based Tier 2 supplier Cascade Die Casting Group Inc. “It’s an exciting time. From what we understand, it’ll go pretty slow then accelerate pretty quickly.”

Amid the high-level proclamations from automakers, elected officials, utilities and other corporate players, Michigan auto suppliers are contending with a sector that’s rapidly shifting in concept but moving much slower in practice. However, experts say the market has enough momentum that it requires suppliers to prepare for the new industry or risk being left behind.

Mike Wall, director of automotive analysis with IHS Markit in Grand Rapids, said West Michigan auto suppliers he works with are already “well down the road” to making EV-specific components like battery trays and separators.

“If any suppliers out there are not actively courting electrification, they’ve definitely got to get on it,” Wall said. “The horse is out of the gate. It’s coming.”

In late January, GM announced that it would phase out gasoline-powered vehicles by 2035 in a move that shook the auto industry. A few weeks later, Ford announced an all-electric target for passenger vehicles in Europe by 2030.

Those are just two companies in a global OEM ecosystem that has pledged tens of billions of dollars in investments and dozens of new electrified models in the coming decade.

“There’s no question this is one of the most dynamic and fluid times in our auto and mobility history,” said Glenn Stevens, executive director of MICHauto, a statewide auto industry association. “This electric vehicle inflection point is very real.”

“At the same time, as a business, we need to make sure we’re embracing the strategy of our customers,” he said.

Cascade Die Casting makes parts that would also be used in electric vehicles — such as mirrors and electric sound system components — but is increasingly interested in powertrain components found in EVs.

Suppliers like Cascade are “following the lead” of Tier 1 suppliers that are in turn following the OEMs, which have set varying degrees of EV production and investment targets.

“We’re going to work with them on anything electric as it comes along,” Greene said. “We’ve looked at a lot of drawings our customers have sent with quite a bit of interest.”

Stevens called this the automotive “food chain,” in which OEMs take cues from market demand to guide their investment philosophy, while major Tier 1 suppliers are guided by the automakers, and so on down the line.

“It’s a bigger challenge as you go down the food chain, but they all have to figure out what’s the demand curve going to look like,” Stevens said. “We’ve got new technology, changing consumer preferences and regulation and policy changes from the new administration. Add those things up, and there’s no question these things are happening. From a supplier’s perspective, companies that are nimble, financially strong and have strategic relationships with customers are going to be the winners.”

A key change coming for suppliers involves order volumes, which at this point are relatively low for EV models but are expected to increase.

“When (an order) has electric components, we’re pursuing it,” Greene said. “We think the low could turn into high volumes.”

In time, this will have the opposite effect with potentially lower volume orders for internal combustion-powered vehicles, experts say. That’s coupled with the fact that EV propulsion systems have a fraction of the components as internal combustion engines.

“We’ve got to be ready for the fact that there’s going to be some fallout,” Greene said. “That’s going to be a loss of business, and we’ve got to make sure we’re on the front end of looking at other applications for electric vehicles.”

While Wall said suppliers’ new products will depend on the type of vehicle components they make, the volume shift will likely be widespread.

“One thing that all suppliers are going to have to do is prepare themselves for the fact that because we have all of these new electric vehicles coming down the pike and because we have existing vehicles on the market that are internal combustion, there’s going to be potential to have lower volume runs, lower throughput and lower sales per nameplate,” he said. “That’s what could complicate things for suppliers. It’s a big consideration.”

Cronin said the auto supply chain market “continues to see a significant wave of new entrants to the space that have experience in higher-power applications but would not be considered traditional automotive players.”

He also noted the likely continuing trend of M&A activity in the sector, “especially with recent announcements from both GM and Ford around their plans for zero emission vehicles in the not-too-distant future.”

The underlying unknown surrounding the EV sector is just how much adoption will take place and when, particularly in the passenger vehicle market. Adoption levels are dependent on a variety of factors — charging infrastructure availability, government incentives, battery prices, models that suit consumer preferences and, to a growing extent, how much fleet vehicles will push the market as a whole.

But that landscape is shifting quickly, Wall said.

“We’re only on the cusp of a deluge of new EV (models) hitting the market,” he said. “Suppliers we know in the West Michigan market are being asked to quote on this new business.”

Although adoption rates for electric vehicles in the U.S. remain relatively low, that flood of new models should keep companies from being “lulled into complacency” or getting “too bearish” on EVs, Wall said.

“The challenge is in this gray period,” he said. “Adoption rates are still at the lower end, and it’s not going to derail internal combustion. This will be a progression. That’s why it’s important that suppliers have to be mindful of their traditional book of business.”

“There’s been a lot of hype the last couple of years, but not a lot of conversion to electric,” Greene said. “But we’ve got to stay close to it and know that a tipping point is going to come.”

Paddy procurement sees hike of 16.37 per cent from last year

the evolution of supply chain transparency