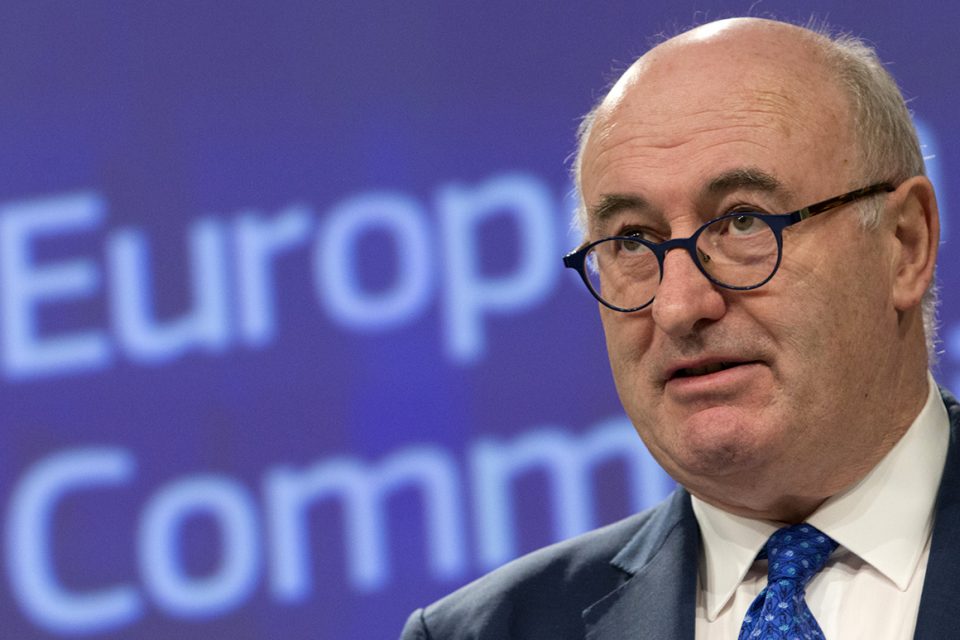 The Trump administration is weighing whether to increase retaliatory duties on $7.5 billion worth of European airplanes, cheese, wine and other goods in a dispute over subsidies for Airbus. Tariffs ranging from 10 to 25 percent are already in place on those goods, but the U.S. could raise them as high as 100 percent after the World Trade Organization ruled Brussels was not doing enough to end its use of subsidies.

In a separate case, U.S. officials are deciding whether to impose 100 percent tariffs on $2.4 billion worth of French goods as part of a dispute over the country’s digital services tax.

Hogan criticized the United States’ decision to slap duties in the long-running aircraft case, saying that move means the EU has no choice but to retaliate with penalties of its own. But he also called for a negotiated solution that would allow both sides to “leave these disputes behind us.”

On the digital services tax issue, Hogan reiterated that the EU will respond proportionately if the United States slaps unilateral tariffs on French goods.

He emphasized that the EU would prefer to see a solution worked out through ongoing talks at the Organization for Economic Cooperation and Development, but said member countries would have a right to proceed on their own if no deal can be reached there.

“The EU fully supports the discussions taking place at OECD level on a global digital services tax. But we have been equally clear that we have no option but to regulate on our own if the U.S. blocks a global agreement,” Hogan said.

That is a message he will deliver personally to U.S. Treasury Secretary Steven Mnuchin and U.S. Trade Representative Robert Lighthizer in meetings later on Thursday, he said.

The trade chief also emphasized the need to move beyond the issues dividing Washington and Brussels and refocus on tackling new challenges. “If we can unlock the problems we have between us,” he said, “it triggers a very positive agenda.”

Both sides also have said they want to negotiate a comprehensive bilateral trade agreement, which has so far been hung up over a disagreement over whether talks should include the sensitive issue of agriculture.

Hogan suggested there could be a way through the seemingly intractable divide by better communicating how the EU is taking some measures to help American farmers — like allowing in more U.S. beef and purchasing more American soybeans — even though the trading bloc does not want to discuss the issue more broadly.

How to Live with the Pandemic EJINSIGHT