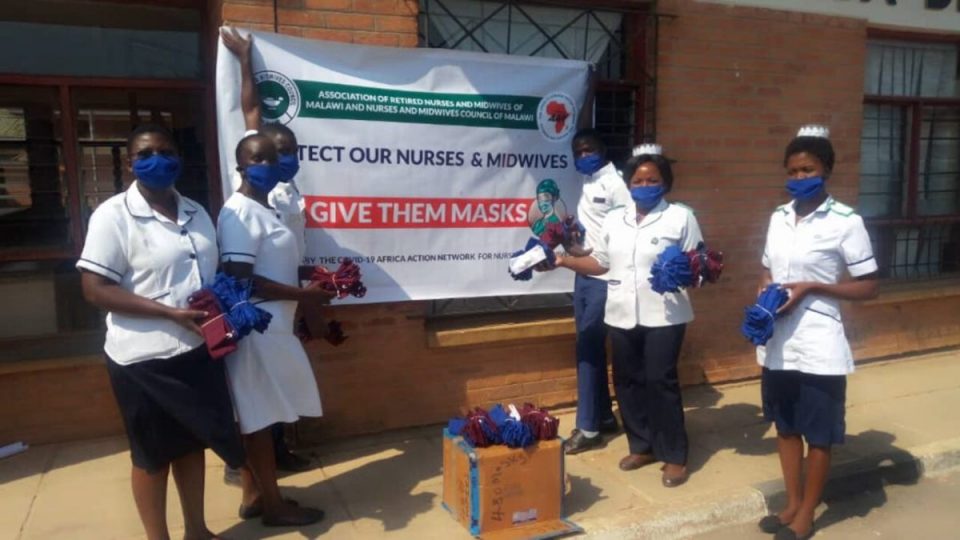 Annet Kabanyoro, dean of Kampala International University’s School of Nursing Sciences, had a problem in the early days of the pandemic – both for herself and her students. Like so many others in the world during the spring of last year, they had no masks. But unlike wealthier nations and institutions, buying them on the open market was nigh impossible, due to costs and fierce competition for supply.

So they set out to find a solution. And did. Within just four weeks of securing a $10,000 grant, Kabanyoro and her team made 130,000 reusable masks.

Kabanyoro is one of several nurses across eastern and southern Africa who have led a drive to create local mask-making operations using synthetic materials and construction methods proven over decades to be effective at containing the spread of Covid-19. The COVID-19 Africa Action Network for Nurses and Nurse-Midwives (AAN), which provided funds and guidance regarding the materials, hopes to support the creation of at least 1 million reusable masks.

In Ishaka, where the Kabanyoro’s school is based, the early days of the pandemic in mid-March were especially harrowing. “Everybody was in a panic,” Kabanyoro said to Direct Relief. Her students were sent home on March 19 and by the end of that weekend, she recalled, most stores in the town of Ishaka were stocked out of masks and other personal protection equipment.

“Nurses and midwifery students were the most neglected,” said Theopista Kabaliisa, a senior nursing officer at the WHO’s Uganda Virus Research Institute who connected with Kabanyoro to help obtain PPE. “We were bad off.”

Getting masks at the time, “required innovation. The students proposed making masks locally,” Kabanyoro said about conversations that took place during the spring and summer while the students were physically away. While the university’s in-house textile department makes linens and uniforms, employees there did not have experience with masks, leaving questions regarding the proper materials and the best practices for constructing them. Securing funds to purchase raw materials was also an issue. As the pandemic raged on, they did not have the luxury of time.

“We had to work very fast,” Kabanyoro said, noting that purchasing N95 respirators for all students was cost prohibitive and that disposable masks also presented a risk to the community, due to their potential for being discarded improperly. In May, Kabanyoro linked up with AAN, which was started in March of last year and by the June she had the funds as well as documentation on best practices for making the most effective masks possible, given their equipment and resources.

Synthetic fibers are best suited for medical masks and respirators, according to Janine Jagger, Ph.D., an AAN advisor and retired professor of internal medicine and infectious diseases, as well as the former director of the International Health Care Worker Safety Center at the University of Virginia School of Medicine.

With the grant, Kabanyoro and her team could buy polyester, ripstop nylon, and polypropylene. However, finding the materials proved to be challenging during the lockdown and pandemic, according to Kabaliisa. After identifying traders willing to sell for a reasonable price, they picked up the materials, and delivered them to the university’s textile department, which sprang into action. The initiative proved so successful that masks were also given to hospitals in Hoima, Buliisa, and Kasese, as well as to health care workers in the Democratic Republic of the Congo.

“We didn’t want them to be reliant on donations, which are unpredictable, because of the recurring need, and didn’t want nurses and frontline workers to be without masks and PPE,” said Linda Walker, co-chair of AAN. She cited the difficulties many African countries have had in accessing the PPE supply chain, which has been a challenge for even the wealthiest countries during this pandemic. “The supply chain is expensive and inconsistent, so the sustainable part was important,” she said, referring to the domestic production of masks.

In Rwanda, PPE supply has been more stable, with most health care workers having access to quality gear, according to Fiona Mutoni, CEO of Open Arms to Golden Years Village, who also works with the Rwanda Nurses and Midwives Union. However, masks are lacking among the general population, including vulnerable populations, such as seniors, she said.

Mutoni’s goal is to supply aging populations, caretakers, and people who live in rural areas with locally-made masks.

“We found a local tailor and are using local, safe materials,” she said. The current cost per mask is $.50, but she hopes to be able to drop that to $.33 as the project continues. They’ve made 1,500 masks so far.

“Our experience is so far, so good,” Mutoni said, stressing the importance of domestic production capabilities.

“Being produced locally, it’s a bit more affordable. If we use raw materials, it will definitely effect the price more than if we import. We also want to help prevention and we want create this as a source of income. We hope in the future we can produce other kinds of personal protection equipment. We also want to create it sustainably, so that it can go on as the pandemic continues,” she said.

AAN’s partner in Eswatini is on the cusp of starting to produce masks, though it has been stymied by a lack of available and affordable materials. That nation had been dealing with a shortage of PPE even before the pandemic, said Phetsile Mamba, director of the Eswatini Wellness Center for Health Care Workers, which treats health care providers and their families.

“Nurses were very much afraid to go to hospitals,” she said.

As Uganda, Rwanda, and South Africa, among other nations, continue to deal with the latest wave of Covid-19, Mutoni hopes that the locally-made masks can help fill the gap in needed PPE and help bring people together.

“This is something very important to our community, protecting the needy and, for sure, protecting each other,” she said.

In addition to AAN, Direct Relief has contributed more than 57 million pieces of PPE to health care providers in 12 African countries through the Covid Action Fund for Africa and has also supported the South Africa Solidarity Fund.

Prepare Your Supply Chain for Coronavirus

What pharmacy students in Ethiopia can do with supply chain education

Profit from the small-cap bull market