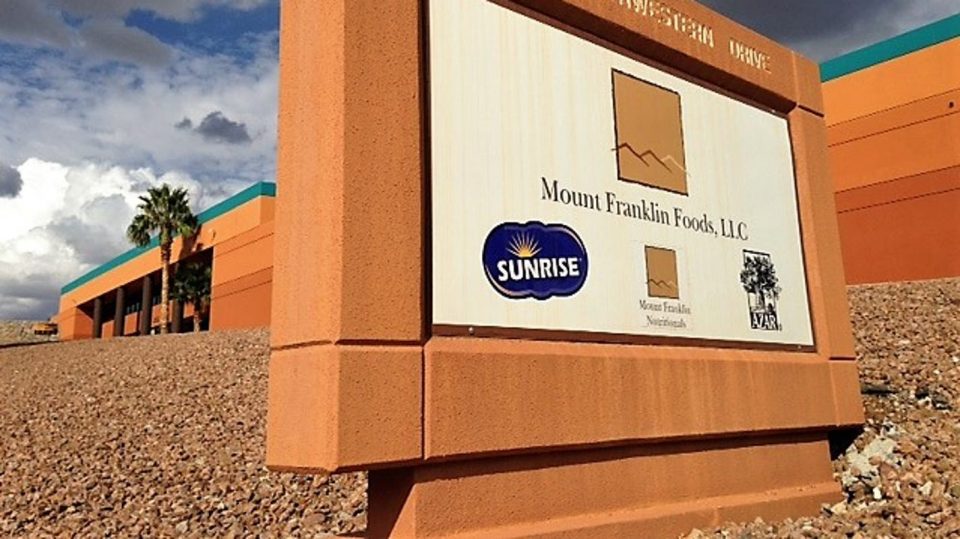 Representatives tour the construction site of a new border fence being built in rural Southern New Mexico between Santa Teresa and Columbus, N.M., South of Highway 9 Tuesday, Oct. 8, in N.M.

El Paso candy manufacturer Mount Franklin Foods has placed a multimillion-dollar bet on the candy industry shaking its COVID-19-tied doldrums and growing again in the coming months and years.

The bet is the company’s recently opened, 220,000 square-foot, state-of-the art, multimillion-dollar factory, which eventually will produce about 130 million pounds of gummies, jelly candies, and fruit snacks per year, or almost 40% of the company’s annual candy production. It has three other Juarez candy plants.

The new plant, initially employing about 350 people, is in a developing industrial area in San Jeronimo, Mexico, just across the border from the Santa Teresa, New Mexico, port of entry, and about 15 miles from the company’s West El Paso headquarters.

About half the plant opened in late September, and the other half is scheduled to open in 2021.

“Our overall sales are down 30 percent” this year because of COVID-19-tied business restrictions, but candy sales have been staying flat, and are expected to grow by double digits in the next two years, said Enrique Grajeda, Mount Franklin chief executive officer.

“We expect a significant increase in years to come in the fruit snacks and gummy (candy) category,” he said.

COVID-19-tied business shutdowns in the spring hurt the company’s sales, especially for nut products made at its West El Paso Azar Nut factory, and mints made in North Carolina because those products are mostly sold to restaurants, bars, hotels and sports venues — hit hard by the pandemic, Grajeda said.

Factory’s workforce to grow to 700

The company hired about 350 people, mostly from the Juárez area, to staff the new candy factory and plans to add another 350 workers in the first quarter of 2021, when the second half of the plant is to open, Grajeda said. The workers’ pay rate wasn’t disclosed. But the company pays above the industry average in Juárez, Grajeda said. 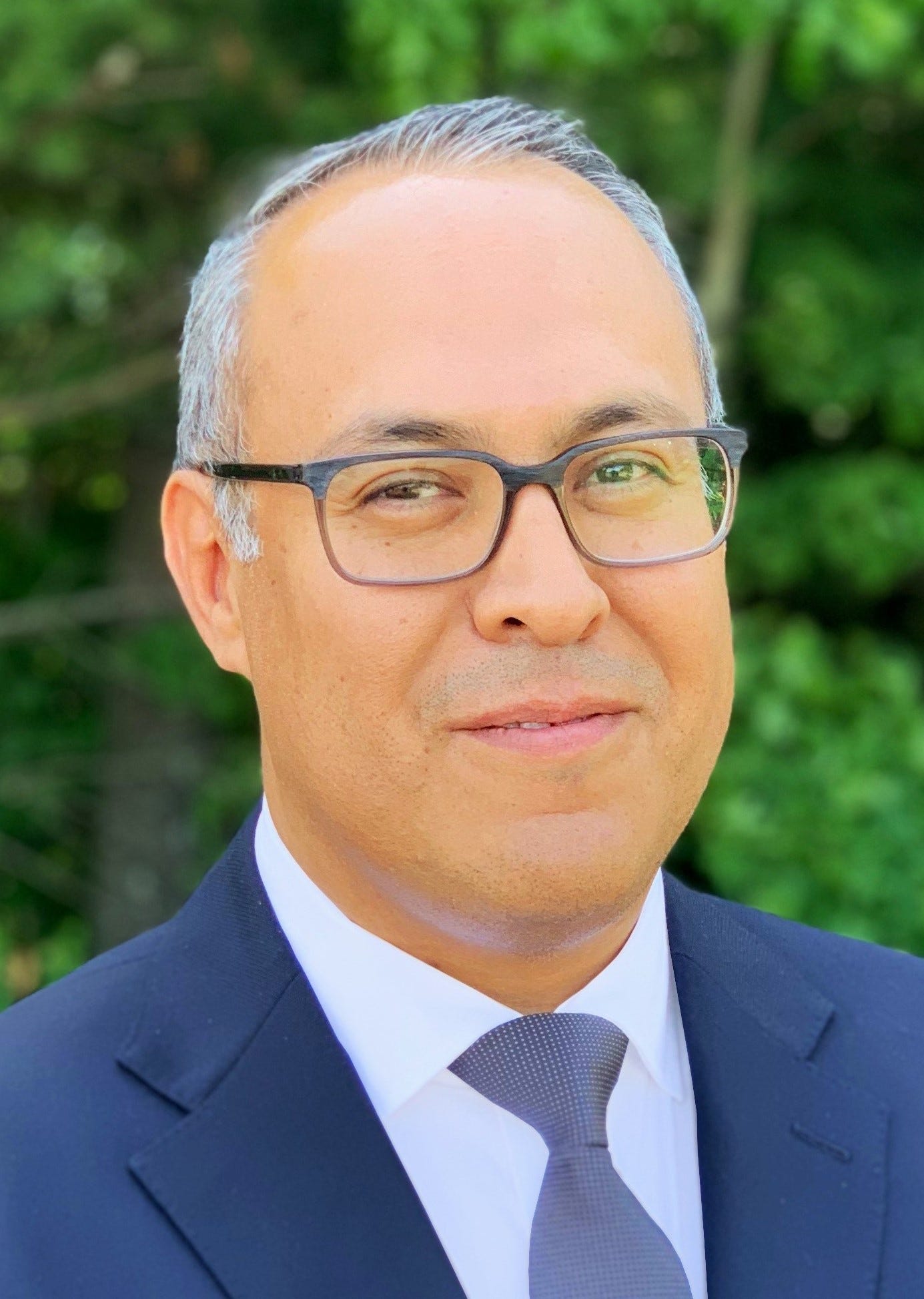 The starting wage for factory workers in Juarez is about $3 per hour, said Manuel Ochoa, vice president of business development for The Tecma Group of Companies, an El Paso group operating factories in Juarez. That’s well above Mexico’s required minimum wage, now at just over $8 per day.

The Hunt Institute for Global Competitiveness at the University of Texas at El Paso recently reported the average salary for factory production workers in Juarez was $384 per month in the first half of 2020. It did not report an average hourly wage.

Mount Franklin employs about 4,500 people at all its operations, including about 3,400 in Juarez, where it has three other candy factories. About 500 people work in El Paso, including about 175 people at its corporate offices at 1800 Northwestern Drive in the Northwest Corporate Center industrial park. That’s where it’s Azar Nut factory is located. It also operates factories in Illinois and North Carolina. 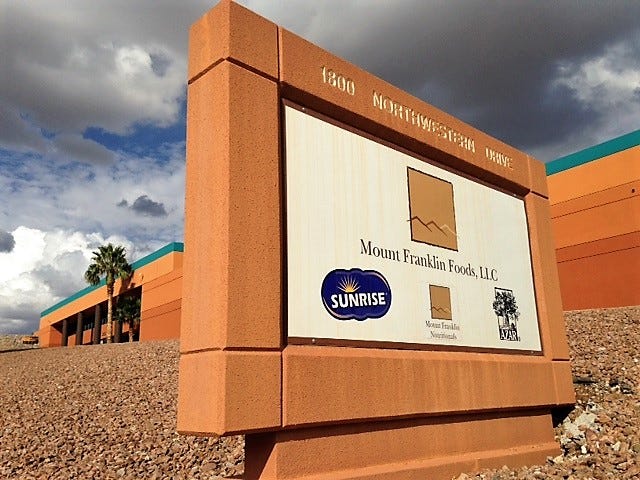 The company’s Sunrise Confections division makes candy for other companies, for retailers’ private label brands, and for its own Sunrise brand.

The new COVID-19 world had to be taken into account, with thermal cameras to take temperatures of workers as they enter the factory, sanitation checkpoints, and plexiglass dividers in various areas, Grajeda said. Workers also wear face masks and gloves, he said.

The new factory is located on four acres of land in a developing industrial area in San Jeronimo, Mexico, dominated by a huge Foxconn complex where computers are assembled. It was an area proposed as part of a failed binantional bid for online retailer Amazon’s second headquarters.

The land is part of thousands of acres owned by Mexico businessman Eloy Vallina,  Mount Franklin board chairman and majority owner of the company, a subsidiary of Mexican company Elamex. Vallina donated land yeas ago to Foxconn for its campus.

Vallina’s ownership in the land isn’t the reason the factory was located in San Jeronimo, Grajeda said. The location is strategically located about a mile from the Santa Teresa port of entry, which allows for quick shipments from the plant to the company’s distribution center in Northeast El Paso, he said.

“Our core business and infrastructure for candy (manufacturing) is, and always has been, in Mexico,” Grajeda said.

Hospitality Mints production moving to Juárez due to sales reduction

The company also is in the process of closing its Hospitality Mints factory, acquired in 2018, in Boone, North Carolina, and moving the butter mints manufacturing to Juárez and administrative functions to El Paso due to COVID-19-related sales declines, Grajeda said. About 80 people will lose their jobs there when the move is completed in 2021, he said.

The San Jeronimo factory isn’t the only recent expansion for Mount Franklin. In March, it acquired Arrro Corp.’s food processing and ingredients divisions in the Chicago area for an undisclosed amount and renamed the company Element Food Solutions, which will operate as an independent business under the Mount Franklin umbrella. It makes bake mixes, powdered drinks and other products for the food service industry. It employs about 480 people at its Illinois factory and distribution center.

The acquisition supports Mount Franklin’s strategic growth strategy and adds products in growing categories, including protein powders and healthy baking ingredients, Grajeda said in a statement when the deal was announced.