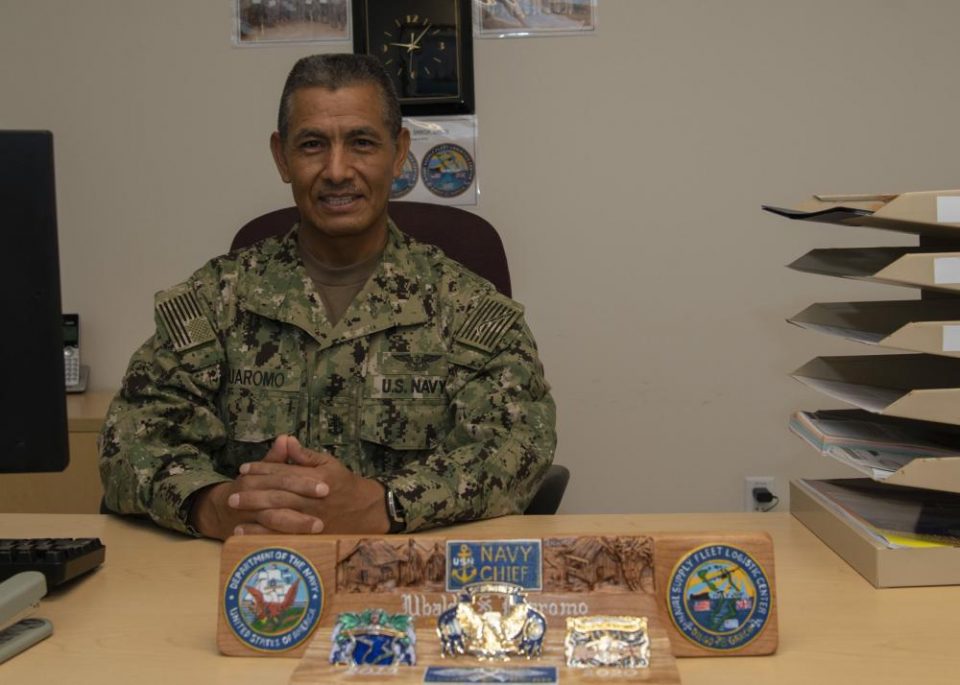 The United States of America is a country of opportunity and dreams for people coming from different corners of the world seeking a better life for themselves and their families.

Huaromo is a proud American and a proud chief, who considers it an honor to be one of “the few, the chosen”.

After acquiring a job in a travel agency, Huaromo was able to come to the U.S., arriving in Maryland in 1988 on his own. Huaromo spoke little English and worked multiple jobs before following his favorite quote by the late President John F. Kennedy, “Ask not what your country can do for you, ask what you can do for your country,” and enlisted into the military service of his adopted country.

He has had a long naval career, originally coming in as an undesignated airman recruit at 30 years old.

“I always had in mind to join the Armed Forces, and I never thought that dream would ever become a reality,” said Huaromo.

He eventually struck aviation storekeeper, which transitioned to storekeeper and then logistics specialist, the current name of the rating.

After enlisting in the Navy, Huaromo brought his wife and two children from Peru to the U.S. Huaromo made E-5 in three years, and was considered a Sailor on a fast track to success. He went on to be selected as 2011 Sailor of the Year for Fleet Logistics Center Sigonella, Site Rota, Spain.

Shortly after, Huaromo was promoted to Chief Petty Officer in August 2012. He said that it wasn’t only the Navy that made him chief, but the Sailors he’s served with, both junior and senior.

“The Navy only selects the best of the best to be a chief, and I was one of them,” said Huaromo. “I never thought I was going to be able to achieve this rank.”

As a chief, Huaromo said that mission comes first, his Sailors second, and himself last.

“For me, working under Chief Huaromo has been really exciting especially since he’s been in the military for 24 years,” said Logistic Specialist Seaman Apprentice Adrian Marquez. “He’s always passing down a lot of knowledge to me and letting me know how I can better myself and be a better Sailor.”

“I’m not the typical Peruvian or American, nor the typical Peruvian-American,” said Huaromo. “I’m just me, a low profile and humble chief who thinks and cares about others first before I think and care about myself. Militarily, the mission comes first. Everything else is secondary.”

He also said that to him money isn’t everything, and what makes him happy is doing a job well so he expects his Sailors to do the same.

“Whenever I make a mistake, I know that he won’t get too mad at me right away,” said Marquez. “Instead, he’ll communicate with me and let me know how I can do better.”

Huaromo said that he and his Sailors work together, coming up with new ways to complete the mission.

“I always tell my Sailors, ‘find what you love to do. Once you find it, do what you are supposed to do, and be where you are supposed to be, and have a good and positive attitude’,” said Huaromo. “With that, you will be good but, maybe, not good enough to get promoted quickly and move up in rank.”

Huaromo tells his Sailors that if they want to be promoted quickly and move up in rank, they must be better than their peers, and go above and beyond expectations.

Marquez also said that he feels lucky to have Huaromo as his chief, saying that he’s always positive and looks out for all his Sailors.

“I will truly miss my Navy, my great Navy! The Navy of the United States of America, the most powerful naval force of the world. God bless America now and forever,” said Huaromo.

After having the opportunity to seek out a better future for himself and his family and falling in love with the United States of America, Huaromo is retiring from the Navy in December 2020 after more than 24 years of honorable service.

This work, Rise to Anchors: From the Mountains of Peru to U.S. Navy Sailor, by PO3 Carlos Hopper, identified by DVIDS, must comply with the restrictions shown on https://www.dvidshub.net/about/copyright.