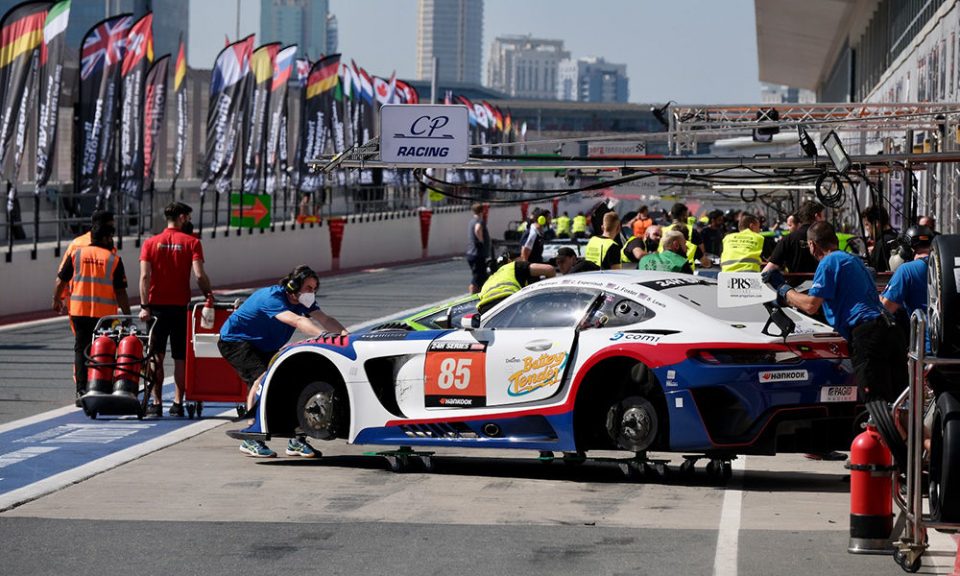 ***The No. 67 Dinamic Motorsport Porsche 911 GT3 R of Matteo Cairoli led the way in Wednesday’s Unofficial Private Test in preparation for this weekend’s Hankook 24H Dubai. Cairoli reeled off a best lap of 1:58.008 in the first of two sessions, which held up as the quickest of the day.

***While the official entry list has not yet been updated, a total of 79 cars turned laps in the afternoon session. Eighty-four cars were listed on the pre-event entry list, including 28 GT3 entries spread between the overall, Pro-Am and Am categories.

***A parade featuring all race entries was canceled and turned into a group photo on the start/finish straight Wednesday evening.

***At least three drivers have been ruled out of the event after testing positive for COVID-19, the highest profile being Mikhail Aleshin, who was due to drive the No. 13 CapitalRT -YADRO Mercedes-AMG GT3 Evo. The HRT-run entry has switched to the GT3 Am class as a result and will rely on a three-driver lineup of Victor Shaytar, Denis Remenyako and Sergey Stolyarov.

***A similar change has been made to the No. 95 Duel Racing with TF Sport Aston Martin Vantage GT3, with Sam De Haan remaining in the UK to “observe COVID-19 protocols” according to a statement from the British team. He will be replaced by team regular Ahmad Al Harthy, which moves the car to the GT3 Am class.

***A handful of teams, including The Heart of Racing, utilized spare cars during today’s sessions to prevent collecting mileage on its race chassis. Event regulations do not prohibit the use of spare cars in unofficial sessions.

***GT3 Am class entries have received power increases and reduced minimum weight compared to the Pro-Am and overall categories, which has caused some concern among pro drivers. The Mercedes, for example has a 3 mm larger air restrictor and 30 kg less weight in GT3 Am configuration compared to the top class.

***SunEnergy1 by SPS Automotive Performance’s Jules Gounon told Sportscar365: “The issue is that even if you have a good exit against an amateur at the end of the straight, there is 50 meters. It makes the whole thing complicated for us.”

***ST Racing, which along with Schubert Motorsport is giving the BMW M4 GT3 its customer racing debut, has received increased support from BMW M Motorsport this weekend.  Team co-owner/driver Samantha Tan said: “We have a couple of the BMW guys that helped develop this car working on our team this weekend.”

***The team now has a total of four Aston Martin Vantage GT4 cars to go along with its three GT3-spec Astons. Its race car this weekend contested GT America powered by AWS last year with Gray Newell, with its chassis from the 24H Sebring back at its workshop in Florida being prepared for the upcoming SRO America season.

***All four current models from Audi Sport customer racing will be competing in the same race for the first time. It includes the 24-hour debut of the Audi R8 LMS GT2 car, entered by PK Carsport in GTX, as well the new-gen Audi RS 3 LMS TCR car that is now available to customers worldwide after contesting FIA WTCR last year.

***Audi Sport customer racing has brought one of its European-based parts trucks to Dubai, with the German-registered transporter one of the few in the paddock amid 70-plus sea-freight containers that nearly all teams are working out of.

***The 24H Dubai marks the debut of the 992 classes for Type-992 Porsche Cup car machinery. It is divided between Pro and Am categories. Other notables taking part in the classes include Jos Verstappen (Team GP-Elite – Pro) and former professional road bicycle racer Tom Boonen (Red Ant Racing – Am).

***Newly named Porsche Junior Laurin Heinrich will be competing in two 24-hour races this weekend, with the German driver entered in Huber Racing’s No. 923 Porsche in 992-Am while also taking part in the Virtual 24 Hours of Le Mans in a factory Porsche 911 RSR-19.

***The Lumirank system makes its debut in 24H Series competition this weekend. Utilized in SRO events and other major endurance races, the position display system has become a popular way for fans and competitors to follow the action trackside.

***2022 marks the return of the 24H of the Continents championship. It brings together the 24H Dubai, 24H Sebring and a team’s best result from a 24H Series European round. A car must complete at least 50 percent of the laps of the winning car in its category in order to score points in the championship.

***While fans will be allowed in the grandstands, the paddock has been closed off to competitors only as part of the event’s COVID-19 protocol. Dubai Autodrome has employed “COVID Patrol” officers that are in the paddock to enforce safety measures such as mandatory mask-wearing.

Laurent Mercier contributed to this report

John Dagys is the founder and Editor-in-Chief of Sportscar365. Dagys spent eight years as a motorsports correspondent for FOXSports.com and SPEED Channel and has contributed to numerous other motorsports publications worldwide. Contact John