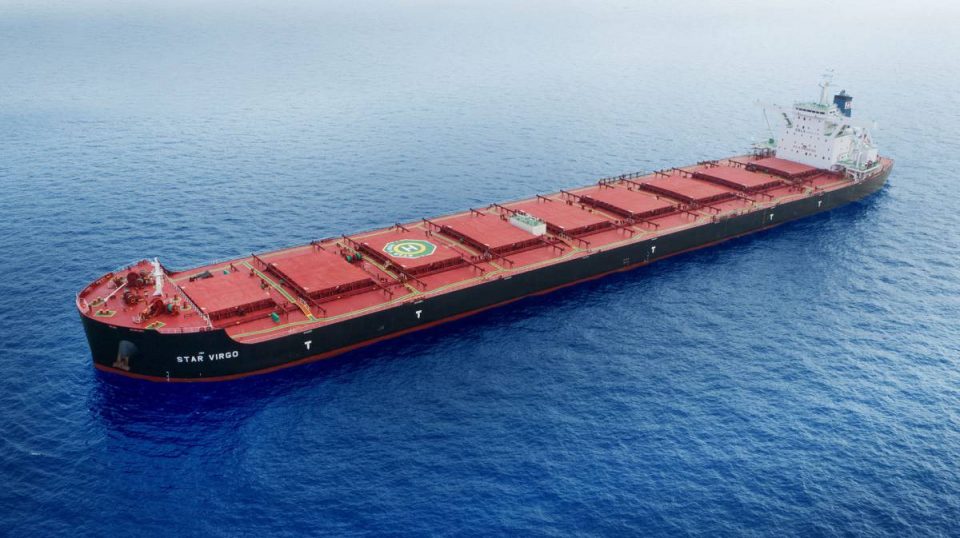 Platts also assesses rates for Capes that use exhaust-gas scrubbers and burn 3.5% sulfur heavy fuel oil. Due to much-slimmer-than-expected fuel spreads in the wake of the coronavirus, scrubber-equipped Capes currently save just under $1,800 per day. That brought scrubber Capes’ TCE rate to $35,253 per day.

Capesize rates are largely driven by iron ore volumes from Australia and Brazil and the extent that exports from those two sources match up (or not) with vessel tonnage positioned in the Atlantic and Pacific basins.

“The Cape index has been very strong on a lack of tonnage in the Atlantic,” Nick Ristic, lead dry cargo analyst at Braemar ACM Shipbroking, told FreightWaves. “Brazilian charterers have been extremely busy over the last couple of weeks covering October volumes, while shipments have jumped. Daily shipments of Brazil over the past seven days averaged 1.25 million [metric] tons per day, up 18% over the previous 10 days.”

It’s not all about Brazil and the country’s giant iron-ore miner, Vale (NYSE: VALE). According to Clarksons Platou Securities analyst Frode Mørkedal, “During the July-September period a good amount of Australian cargoes were removed from the market due to normal seasonal maintenance on the part of the large iron ore miners. But higher volumes have now returned to the market.”

Regardless of whether the iron ore is coming from Brazil or Australia, the demand driver is Chinese steel production. “Iron-ore demand from China continues to boom,” commented S&P Global Platts on Monday.

Rates for smaller bulkers — which unlike Capes have high exposure to grain transport — have yet to follow the Capes’ lead.

Asked about the smaller bulker classes, Ristic told FreightWaves, “We are fairly positive on grain trades in the fourth quarter. U.S. soybean volumes are picking up, Brazilian corn shipments remain strong and Ukrainian corn exports are about to kick off.”

On the downside, “seriously depressed coal volumes globally are keeping some pressure on Panamax earnings.”

On the upside, Capesize strength should trickle down. “If high Cape rates are sustained, Panamaxes will naturally follow as Cape stems will start to be split,” said Ristic. A “stem” is a shipper’s quantity of cargo. Shippers will split a Capesize cargo into two Panamax cargoes if it’s cheaper to do so.

These equities have been rising over the past week, however, with one exception they are still down 22%-43% year-to-date. (The outlier is Scorpio Bulkers, which is doing much worse than its peers and is down 75%.)

When will rates retreat?

The problem for dry bulk stocks is that rates will almost certainly retreat in the months ahead. Is current rate strength is enough to entice investors?

Looking at the forward curve, Cape futures for the month of October rose to $28,553 per day on Monday — a positive sign. But December futures fell to $18,672 per day.

As Ristic explained, “Fourth-quarter FFAs [futures] are lower than current earnings and it’s extremely unlikely for these levels to be sustained for months at a time. The longer the current spike is sustained, futures will continue to rally. But if rates start to rapidly fall, the sell-off will likely be even more aggressive than the rally.”

Breakwave Advisors argued in a new blog post that it’s not about the absolute rate, it’s about the average. In the past decade, Capesize rates $42,000 per day in 2013. “It will not be surprising to surpass such levels soon,” it predicted, adding that rates would then inevitably correct.

Instead of dismissing the current situation as “another short-term spike,” Breakwave advised investors to focus on freight cost relative to the price of a cargo of iron ore and other dry commodities. Looked at this way, the freight percentage is now at a seven-year low relative to the cargo price.

Breakwave maintained that there’s room for the freight cost to rise as the percentage of the cargo cost reverts higher. Miners should have less resistance. This could benefit absolute rates over time. And for investors, the average rate over time is what to watch, not press headlines like Monday’s on new highs. Click for more FreightWaves/American Shipper articles by Greg Miller