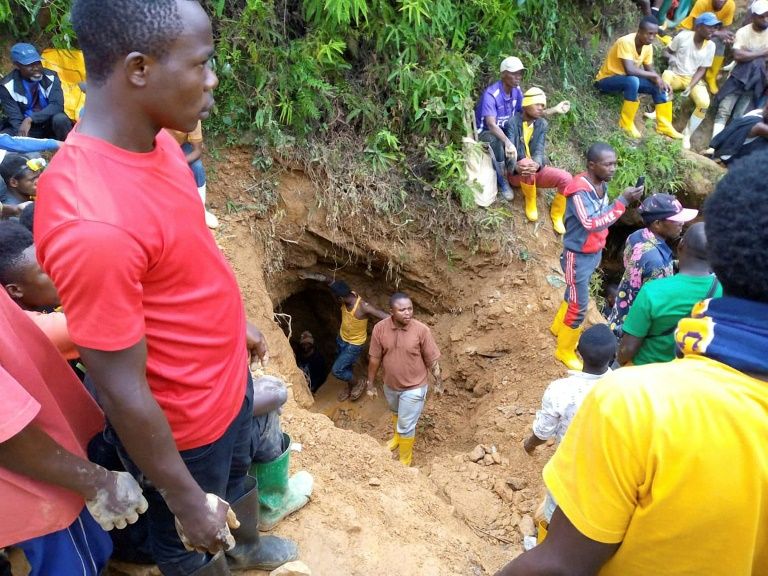 Illegal small-scale gold miners in DR Congo, such as those who were killed when their makeshift mine collapsed last week, are the often-exploited first link in a supply chain that extends to Dubai, according to experts.

The bodies of 22 artisanal miners have been recovered as of Monday, a resident at the scene told AFP, after torrential rain flooded their mine in the eastern town of Kamituga three days before.

The mining town’s mayor has said 20 local families have reported missing loved ones.

Rescue efforts continued on Monday to find any survivors of the mining disaster, which are all to common in the vast central African country’s volatile east.

The “diggers”, as the artisanal miners are known, were searching for gold at the site of a subsidiary of Canadian gold mining company Banro.

Banro announced last year it was suspending its operations at the site in the South Kivu province.

DR Congo’s artisanal miners risk their lives in dangerous mines to extract gold and sell it to local traders.

“In Kamituga, you can find 300 purchasing counters,” said Raoul Kitungano, of the Congolese campaign group Justice Pour Tous (Justice for All).

These traders then export the gold to bordering countries — mainly Burundi and Uganda.

The trade almost entirely escapes the Congolese authorities, a blow in a country of huge mineral wealth where 72 percent of the population live on less than $1.90 a day, according to the World Bank.

– Smuggled to the Middle East –

A United Nations expert report published last year said “a senior official of the mining administration in South Kivu assessed that about 300 kilogrammes (660 pounds) of undeclared gold transited each month” through the provincial capital Bukavu.

“But provincial government statistics showed about five kilogrammes a month on average,” the report said.

A lawyer specialising in mining, Me Lambert Djunga, emphasised how the miners are exploited.

“Local traders resell the product of the work of poorly paid artisanal miners to cross-border traffickers, who in turn illegally export the product mainly to Bujumbura or Kampala,” he told AFP.

The Burundian and Ugandan capitals are home to trading posts that then sell the gold on “at high prices to the Gulf monarchies or to Europe,” the lawyer added.

The trade route he described was matched by the UN report, which said that “most Congolese gold was smuggled through neighbouring countries to Dubai as the main destination”.

There is a staggering disparity between what the “diggers” are paid and what the gold is ultimately worth.

Gold prices have soared during the coronavirus pandemic as investors seek a safe haven, hitting an all-time high of $2,000 per ounce last month.

As well as gold, the Democratic Republic of Congo also has huge reserves of cobalt, copper and coltan.

The World Bank estimates that 10 million people — 12.5 percent of the 80 million population — in DRC “derive their livelihoods from artisanal and small-scale mining”.

The loss in potential value from the gold in these eastern areas, which are riven by poverty and grinding conflict between armed groups, could be immense.

The UN report said it “documented that some armed groups continued to finance their activities through illegal mining, thereby contaminating the supply chain”.

After Friday’s Kamituga disaster, President Felix Tshisekedi said he asked the government to “take strong measures so that such tragedies are not repeated”.

The public service Saemape is supposed to provide “technical and financial assistance” to mining cooperatives.

But Justice Pour Tous’s Kitungano said Saemape “has failed in its mission”, and called for reform to close the “many loopholes”.

Lawyer Djunga had another suggestion.

“I invite the authorities to allow the Central Bank of the Congo, like it did under (former dictator) Mobutu Sese Seko, to buy artisanal production from real artisanal miners, instead of putting them at the mercy of these traffickers who pay them almost nothing compared to the selling price,” he said.

coronavirus and the pharmaceutical supply chain