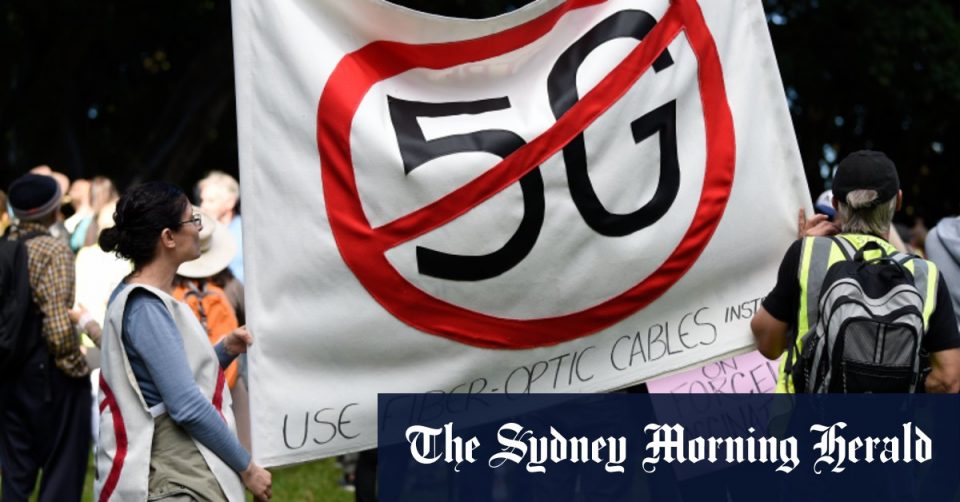 “Every time you have a natural disaster you will have people wanting to take advantage of it,” he said. “The world that we live in at the moment has people using every opportunity available to them to undermine civilised society.

“We certainly have discussed with our intelligence agencies the cause of virtually every natural disaster. I know people get on the internet outside the academic sphere that provides us with advice on these things and put forward conspiracy theories that are just there to cause havoc in the community and to split the community.”

A spokesperson for ASIO said it is aware of extremists seeking to exploit the circumstances and uncertainties of the COVID-19 environment.

“While the threat of violence inspired by Islamist extremism remains ASIO’s principle terrorism concern, extreme right-wing groups and individuals willing to engage in acts of violence to achieve political objectives represent a serious, increasing and evolving threat to security,” the spokesperson said.

Deakin University researchers Lydia Khalil and Joshua Roose said the management of Australia’s disaster and emergency response needs to recognise how COVID-19 and the summer bushfires have been used by extremists to create social division, fuel racism, spread false information and create distrust in government.

“The back-to-back emergencies – COVID-19 pandemic and Australian bushfires reveal that the government’s disaster and emergency management response must include a recognition that these crises will play into the hands of extremists,” Ms Khalil said.

“Governments are missing a key element of crisis response; they must not only put together strategic communications campaigns to deal with disinformation and project a sense of order and control during crisis, but they must now also account for the accelerations of violent extremism as part of their disaster management.”

Research by Ms Khalil and Dr Roose, previewed in the Lowy Institute’s Interpreter, has found some alternative right groups have used encrypted social media sites in Australia to blame ethnic diversity for the pandemic and to contest the government’s legitimacy during a time of crisis. Those views are filtering through to social media through individuals.

Mr Elliott said the research is “pretty much on the money”.

Ms Khalil and Dr Roose, who are senior research fellows at the Alfred Deakin Institute for Citizenship and Globalisation, found extreme right wing groups had spread baseless conspiracy theories blaming Muslims for starting the summer bushfires as part of a jihad, the Chinese for deliberately spreading COVID-19 and the 5G network for spreading the virus. Alternative right bloggers have blamed Chinese Australians for emptying supermarket shelves and ethnic diversity for the spread of coronavirus. ISIS had also presented the virus as a punishment from God and was using it as a recruiting tool.

“Globally, dozens of 5G phone towers have been burnt in the belief that they are playing a role in spreading coronavirus, including the UK, NZ and recently in Melbourne,” Dr Roose said.

“This indicated that at least some people subscribing to conspiracy theories are prepared to take violent action.”

Dr Roose and Ms Khalil warned that left unaddressed, the violent extremism and distrust of government threatened to “incubate and spread, which makes maintaining and recovering government legitimacy and trust in the long term all the more difficult”.

“Far-right figures have also used the government’s COVID-19 response to stoke distrust in government by claiming that the government is using the crisis to control average Australians,” the researchers said.

Some alternative right social media sites have promoted the idea that lockdown measures were part of government plots to control citizens beyond the crisis.

The researchers warned that disasters and emergencies play into “accelerationism” theory, found throughout the extreme right, which argues that liberal-democratic order is a failure and that its demise must be accelerated through stoking social division and violence.

Our weekly newsletter will deliver expert analysis of the race to the White House from our US correspondent Matthew Knott. Sign up for the Herald‘s newsletter here, The Age‘s here, Brisbane Times‘ here and WAtoday‘s here.

Anna Patty is a Senior Writer for The Sydney Morning Herald with a focus on higher education. She is a former Workplace Editor, Education Editor, State Political Reporter and Health Reporter.