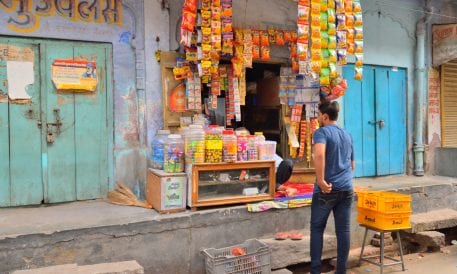 India’s food and grocery landscape looks a lot different than it does in the United States. Unlike the U.S., big-box supermarket chains where consumers go to purchase a week or so worth of food items are not the norm. Instead, shoppers tend to purchase non-processed staples, like rice, every couple of days.

The food and grocery supply chains within India look a lot different, too, with local mom-and-pop Kirana stores facing a fragmented market to procure the items they need for their customers. According to Ashish Jhina, co-founder and chief operating officer of B2B eCommerce platform Jumbotail, there is a significant opportunity to digitize India’s food and grocery supply chains, and for these small retailers to embrace online commerce.

That can only happen, however, if the technology is able to meet the unique needs of India’s market. But, as Jhina told PYMNTS in a recent interview, success not only means moving the needle in B2B eCommerce adoption, but also in digitizing India’s largely-cash economy.

While India is one of the world’s largest economies, many industries in the country continue to rely on legacy infrastructure to operate. The food and grocery space is no different.

Jhina explained that India’s food and grocery space, worth upwards of $500 billion, is almost entirely made up of standalone mom-and-pop Kirana stores. These local retailers — of which Jhina said there are as many as 12 million — are typically run by a family that must physically visit a wholesale market to procure items they need to sell from hundreds of different suppliers.

Not only is the industry’s supply chain fragmented, but there is added inefficiency due to these retailers having to make inventory purchases quite frequently, and then organize their own transport of goods back to their stores.

“A typical store would essentially deal with 100 or 150 different suppliers,” Jhina said. “The retailer has to go to a large wholesale market. It’s a highly inefficient process, and it usually takes a full day.”

Digitizing the procurement process, Jumbotail has launched a B2B eCommerce portal for these Kirana stores and suppliers to connect and transact online. With support for multiple languages, the platform can be accessed on a mobile device, and offers warehousing, delivery and financing solutions for both buyers and sellers.

When the pandemic hit, tackling these friction points became even more important. Amid a widespread shutdown, Kirana stores remained open as essential businesses to continue serving their local communities — yet store owners were unable to physically visit their wholesale marketplaces. For that reason, Jhina noted that the digitization of B2B commerce became perhaps even more important than the digitization of B2C.

Solving for some of the most unique pain points of India’s food and grocery arena means addressing challenges on the B2B side of the market, including supply chain fragmentation and last-mile logistics inefficiencies.

When it comes to payments, India presents another unique challenge: While the nation remains a cash-dominated economy, it also operates one of the most sophisticated payment networks in the world today: UPI. While the infrastructure exists to optimize and digitize payments, Jhina said there is a “mental block” that keeps cash at the top. It’s a conundrum that presents yet another opportunity to inject efficiencies in the food and grocery supply chain — with ramifications that can reach even further into the broader economy.

Today, he said, there is a “disincentive” to digitize payments on both the B2B and B2C front because many of today’s suppliers don’t accept electronic payments. That means they need cash to pay their vendors, and the most efficient means of obtaining cash is to accept it from customers. By supporting electronic payments in the B2B use case, there is an opportunity to drive further digitization of a significant portion of B2C payments volume in the country.

“If they were to turn B2B payments largely digital, it would be a huge driver of B2C payments becoming more viable,” noted Jhina. “I believe that it would really catalyze a transformation in the economy toward digital payments on the consumer side.”

As India continues its path toward modernizing its economy and transforming its payment ecosystem, there is a significant opportunity for the food and grocery arena to make a real impact in achieving these initiatives. While tackling the unique challenges of India‘s market is important, Jhina also noted that the country isn’t alone when it comes to a cash-fueled, fragmented supply chain.

“There are a lot of economies that are very similar,” he said. “I believe that India is well-positioned to export this technology to other parts of the world … the world of food and groceries is going to look very different in the next five years — not only in India, but in pretty much every part of the world.”

New forms of alternative credit and point-of-sale (POS) lending options like ‘buy now, pay later’ (BNPL) leverage the growing influence of payments choice on customer loyalty. Nearly 60 percent of consumers say such digital options now influence where and how they shop—especially touchless payments and robust, well-crafted ecommerce checkouts—so, merchants have a clear mandate: understand what has changed and adjust accordingly. Join PYMNTS CEO Karen Webster together with PayPal’s Greg Lisiewski, BigCommerce’s Mark Rosales, and Adore Me’s Camille Kress as they spotlight key findings from the new PYMNTS-PayPal study, “How We Shop” and map out faster, better pathways to a stronger recovery.