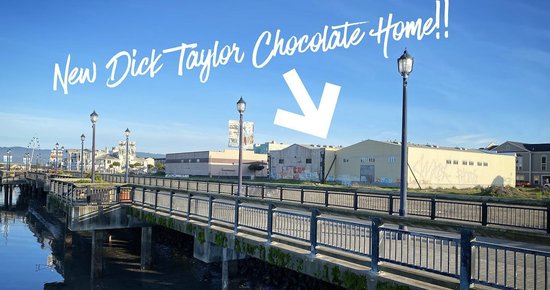 On Wednesday Dick Taylor Chocolates revealed big plans for 2021: They are expanding! After two years in the making, Humboldt’s decade-old craft chocolate company has put the finishing touches on a deal that will move their operations from their current Fourth Street home mere blocks away into the old Co-op building at the corner of E and First streets along Eureka’s waterfront.

“We are so excited to finally be able to announce that we have closed escrow on on the new future home of Dick Taylor Craft Chocolate!” Dick Taylor co-founder Dustin Taylor wrote on the company’s Facebook page.

The building that will become Dick Taylor’s new home has been vacant for decades, having last housed the Eureka Co-op back in the 1990s. More recently, it was purchased by a couple, Pierre LeFuel and Karen Banning, who began renovations on the structure but those efforts ceased with LeFuel’s untimely death.

We are so excited to finally be able to announce that we have closed escrow on on the new future home of Dick Taylor Craft Chocolate!! This beautiful building which is located in the heart of Old Town Eureka on the boardwalk and dates back to the late 1800s. This property has been vacant for a few decades and is so ready to be restored to the gem that it once was.

Adam and I have both lived in Eureka for many years, and it brings us such joy to be given the opportunity to not only fix up a beautiful piece of architecture but to also bring much needed new life to our historic old town water front. Thanks to all involved in making this happen for us!

Wellington Chocolate Factory: A Willy Wonka experience in the heart of Welly

Shortages in the supply chain of specialty pet food