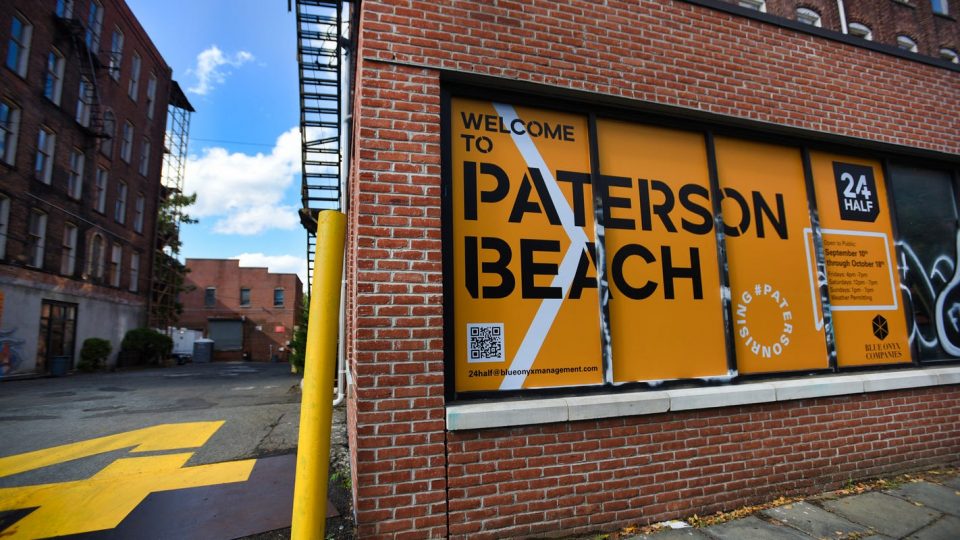 PATERSON — Just downriver from the Great Falls, a red-brick smokestack reaches more than 200 feet into the air, looming over an early 19th century grist mill that eventually had been converted to the Fabricolor dye factory in the 1900s.

Nothing has been manufactured there for almost 20 years. The windows are covered with plywood and Plexiglas. In recent years, there’s been an environmental cleanup of contamination at the site. But that doesn’t seem to discourage the property’s new owners.

“We want to create this into a destination,” said Levi Kelman, the chief executive officer of Blue Onyx, the Clifton-based real estate company that bought the 2.2-acre site for $4.2 million last December.

Kelman sees the five-story main building of the empty factory being converted into offices and retail space. The structure near the smokestack would be a beer hall — or maybe a restaurant. On vacant space across from the main factory, he wants to build about 60 housing units — either apartments or condominiums.

Levi Kelman, CEO of Blue Onyx Companies, who bought a complex of old mill buildings near the Passaic River for $4.2 million located in Paterson, shows around the sites, photographed on September 30,2020.  (Photo: Mitsu Yasukawa/Northjersey.com)

“You could live here, and have a small office there,” Kelman said, looking into the future if all goes well for his firm.

The project would cost upwards of $40 million over five years, he said.

Mayor Andre Sayegh is so excited about Blue Onyx’s proposal that he held a press conference at the site last month even before the developer had submitted official plans for the project.

The press conference was tied to a Blue Onyx publicity stunt — the creation of a so-called “Paterson Beach” on the property. The beach lacks water, but it has sand, umbrellas, beach chairs and picnic tables. Kelman said he set up the beach to draw attention to the property, but that it would not be a permanent part of the project.

Sayegh sees Blue Onyx’s proposal as part of his effort to revitalize the Great Falls, an extension of the plans to rebuild Hinchliffe Stadium, create a state-of-the-art national park visitor center and a new Vista park overlooking the city.

“It will be a regional tourist attraction,” Sayegh proclaimed, noting that Lou Costello Park across the street from the site is slated to undergo a $1 million renovation.

But the park improvements haven’t started yet and, for the past decade, many people in Paterson don’t mention Costello when they identity the area. They simply call it the “homeless park” because of the many disheveled people who congregate there, including clients from the nearby Salvation Army facility.

Kelman said he is aware of the challenges.

“I’m not turned off,” he said. “You need someone to stick their toe into the water first. Many successful projects have started in places where there were problems.”

Several officials and local real estate investors said the current COVID-19 crisis has created additional hurdles for Blue Onyx. The demand for office space is down, restaurants are going out of business and people are struggling to pay their rent.

Levi Kelman, CEO of Blue Onyx Companies, who bought a complex of old mill buildings near the Passaic River for $4.2 million located in Paterson, walks on platforms across a sand-like beach while showing around the sites, photographed on September 30,2020.  (Photo: Mitsu Yasukawa/Northjersey.com)

“Doing anything in real estate right now is like trying to catch a falling knife,” said Charles Florio, Paterson’s most prolific housing developer.

Florio, who out-bid Blue Onyx two years ago in the competition for buying the Paterson Armory site, said he wasn’t aware the Fabricolor property had been up for sale. But he said he probably wouldn’t have tried buying it.

“I like to focus on the 4th and 5th Wards,” Florio said. “No one else want to build there. Everybody is looking to build around the Great Falls.”

Florio said he hoped Blue Onyx is successful, because that would improve overall conditions in Paterson. The developer noted that the city has earmarked more than $100 million in state economic development tax credits towards projects around the Great Falls.

Blue Onyx won’t be getting any of those tax credits, and the mayor said the developer has yet to request any type of financial assistance from the city. But Sayegh said he would listen if Blue Onyx does ask for help.