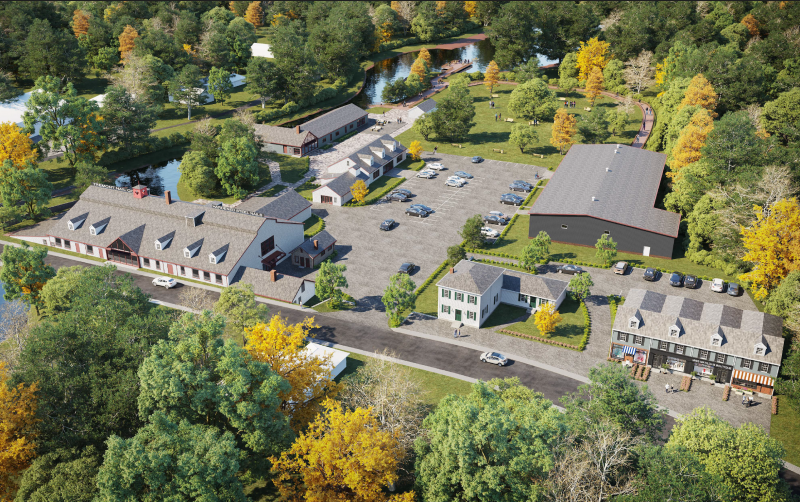 In the eyes of one hopeful developer, the town-owned Tremont Nail Factory property is full of potential.

If Rhode Island-based developer Bentley Companies’ plans came to fruition, the property would become the site of office space, retail establishments and a brewery or restaurant of some sort. Bentley’s plans, presented to the Wareham Redevelopment Authority on Feb. 11, also include a waterfront community park — complete with a pier, boardwalk and kayak rentals.

The proposal is one step toward the town’s goal of redeveloping the Tremont Nail property, which was originally built in the 19th century before it was bought by Wareham using Community Preservation Act funds in 2004. The factory manufactured steel cut nails for decades. Today, the property consists of multiple unused buildings in various states of repair and disrepair.

In December, the Board of Selectmen unanimously approved issuing a request for proposals for a master developer for the property. Bentley, which has a regional office in Foxboro and has worked on development projects throughout New England, was the only developer to submit a response.

Jason Pannone, a Bentley Companies representative, explained that his team saw an opportunity to “bring commerce back” to the Tremont Nail site.

“What we thought we’d do is try and bring a little bit of a design to keep the history of each and every building,” Pannone said. “And bring it into the new age as well.”

He noted that Bentley only planned to construct one new building — building nine on the master plan diagram, which would be a retail space with office space on the second floor.

The rest of its plans were for existing buildings and structures, though all would likely need significant utility upgrades.

Bentley identified building five on its diagram as a potential location for a 3,000 or 4,000 square foot restaurant or brewery with outdoor seating.

Pannone also emphasized that Bentley hoped to take advantage of the location’s waterfront access to create a park, pier and boardwalk that would “pull a little community feel” to the area. Redevelopment Authority member Richard Swenson said he found the idea of a waterfront park very appealing.

Bentley Companies’ designer Frank Zaino said the company’s vision for the property was to expand on what was already there.

“It’s kind of like a hidden gem back there,” Zaino said. “We’re trying to open it up. […] where it’s more of a communal aspect and a destination for a Saturday night out.”

Swenson said he thought Bentley’s Pier Marketplace development in Narragansett, RI, was most comparable to the proposed Tremont Nail project. Except, Swenson noted, that the developer’s plans for Tremont do not currently include a residential component.

He asked if the development could stand alone without a residential element tying people to the location.

Pannone said there was definitely interest in adding a residential component, but noted that, among other hurdles, there would be trouble finding parking space. He was also quick to point out that the property already had a “significant amount of residents” in the surrounding area.

Zaino said he was confident the development could stand alone with or without a residential aspect.

Town Administrator and board member Derek Sullivan said the proposal’s concept was appealing, but he said there would be some challenges such as working around the protected wetlands that surround the site.

While the board seemed pleased with the proposal overall, the next steps were unclear. Members said they would discuss the proposal in the weeks to come and eventually schedule another conversation with representatives from Bentley Companies.

The details of a potential financial deal between the town and the developer also remain unclear.

A decision to move forward with Bentley Companies as a master developer would not hinder the town’s plans to negotiate a host community agreement and lease to use the steel building on the Tremont Nail Factory property to manufacture and package a variety of cannabis products.

The Tremont Nail property is owned by the town and controlled by the Board of Selectmen, but the Redevelopment Authority has operational control of the property.

The Redevelopment Authority is tasked with evaluating the proposal, before making a recommendation to the Board of Selectmen — which has the power to enter into an agreement with a developer.

Hoarding Inventory is Not the Answer to COVID-19