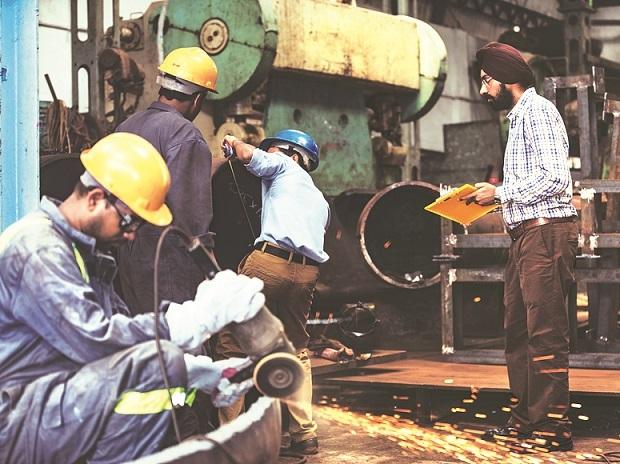 The Reserve Bank of India’s estimate that India’s economic growth will decelerate in the first half of current year is largely on the back of demand and supply chain disruptions in manufacturing activity especially in the private sector.


The private corporate sector growth, which has a share of over 75 per cent in overall manufacturing growth, would need few more months to get back to the normal production level provided the demand picks up. Analysts on engineering and capital goods, for instance, said revenue for the first quarter of FY21 would take a 20 to 50 per cent hit. “It is difficult to make an estimate on how bad will the hit for new orders be as the quarter is yet to end. The impact on overall numbers will, however, be negative though the extent of it will depend on how long this lockdown continues,” said an analyst with a domestic brokerage firm who did not wish to be identified.

Bharat Giani, analyst at brokerage, Sharekhan, expects automobile sales in FY21 to post double-digit decline owing to issues on both production and supply sides. After 40 days of shutdown, automobile companies have resumed production at their facilities. For the first time ever, auto companies reported a zero or near sales month in April. “Most of them will not be able to get to the peak capacities anytime soon and are operating at 30 to 40 per cent levels,” said Giani.


Car market leader Maruti Suzuki India is cautious, too. In a response to an analyst question, during a post earnings investor call on the demand outlook and if the industry volumes in FY21 would drop to FY11 levels, Shashank Srivastava, executive director at the company said, “It is difficult to give a forward guidance of when the market will pick up. Car-buying is a discretionary purchase. It depends a lot on sentiment. And sentiments can be very transient,” he said adding one will get a better idea after on the demand front after a couple of months.


In the cement sector, where a recovery was expected faster than other sectors because of early start of infrastructure construction activity that was exempted in the first easing of lockdown rules, the situation is no different with revenue and production both likely to take a hit. “All cement companies have started their plants and are now ready to supply as per the requirement. The demand is still to come up, demand from the road sector in geographies, like Karanataka and eastern side, has improved, however, there are number of challenges for demand from urban and large centres,” said Mahendra Singhi, managing director and chief executive officer for Dalmia Cement and president for Cement Manufacturers Association. The present cement industry demand is 40 to 50 per cent of what it used to be. “For the full year, I expect the industry to end cement demand lower at 20 to 30 per cent from last year and a similar dip in revenues,” he said.


Sales volumes for UltraTech Cement may come under pressure in FY21 due to an expected slowdown in infrastructure projects and housing demand, Emkay Global Financial Services said in a post-result report for the company.


UltraTech told analysts the company started FY21 with higher inventories and dispatches are continuously going up after the resumption of operation in the third week of April. Currently, cement demand is coming from retail, rural market and some of the National highway projects where the work is been resumed with a view to complete before monsoon. The management, in its earnings call, according to analysts at Narnolia Financial Advisors, at the same time guided for construction activity and demand to slow down for the next 2-3 months due to labour constraint.


Nilesh Narwekar, chief executive officer, JSW Cement, said, “There is demand coming from infrastructure spending so we are seeing signs of demand no doubt but for cement industry the peak demand season is pre-monsoon period which is March-April-May and we may see contraction compared to same period last year for sure.” From April, where the company had to shut down its plant completely, from there onwards it is improving. “Our utilisations were at 20 percent end April and currently in May we are at 45 percent. So we are in better position, said Narwekar. He said though they were looking at local hiring of labour but these changes take time to come so to that extent there will be an impact on business. JSW Cement has a current capacity of 14 million tonne and it plans to go to 25 million tonne by FY23


Rating agency Crisil that in a March report anticipated 5-6 per cent volume growth for the cement sector in FY21 from 0.5-1 per cent estimated for FY20, changed its outlook in its May 18 report. It said respondents to a cement dealer survey said they expect volumes to shrink 10-30 per cent in FY2121 in the base case scenario.


Steel sector, which is also linked to revival of construction activity like cement, is also banking on the infrastructure push but demand is seeing only a gradual pick-up. JSW Steel that has 18 million tonne consolidated capacity said the company was making efforts to gradually ramp up capacity utilisation but the domestic demand outlook is expected to remain subdued in the near term as a vast majority of customers across automotive, construction, engineering and capital goods, will also take time to resume operations and increase activity levels.


Specialised steel demand which is a new area for Indian steel makers could be impacted because of the continued battering of automobile sector. A broken supply chain, exodus of migrant workers and strict guidelines laid by the government amid the lockdown, are creating bottlenecks in production, said officials at various auto companies. The uncertainty on demand is only adding to the woes.


Despite the disruptions Rakesh Sharma, executive director at Bajaj Auto remains optimistic. “We expect the positive forces to start playing out in the second half of the year and smart recovery to take place.” During this period, different agencies will get a better grip of situation and the supply chain lines will get disentangled, he added.


For all manufacturing companies cost-saving measures would be the key to profit improvement whenever demand recovers. CARE Ratings in its commentary, however, said there was high uncertainty regarding duration of pandemic and thus, downside risks to the economic growth are significant.