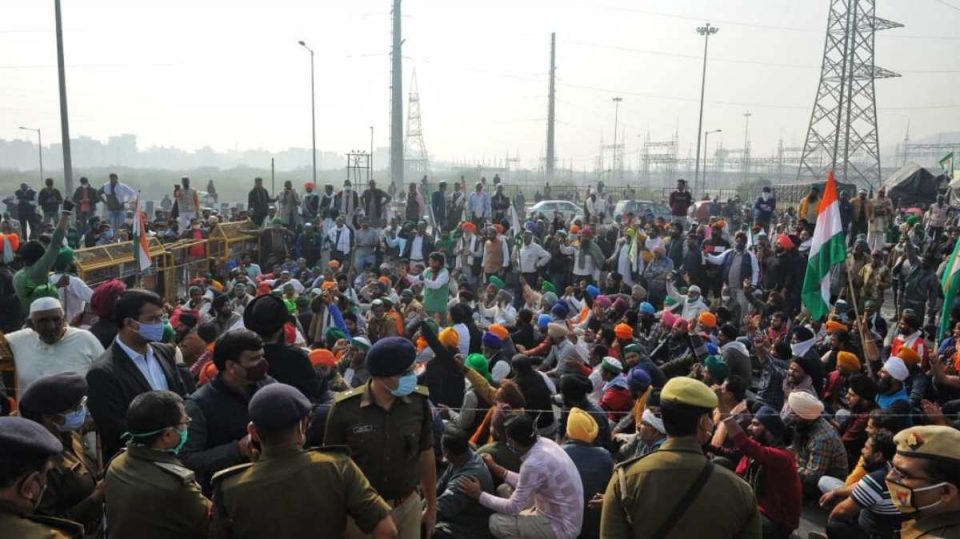 
New Delhi: On the evening of 2 January, Brajraj Singh headed to Delhi from Hapur, Uttar Pradesh, in a caravan of 100 tractors and trolleys, carrying at least 50-55 farmers each, to join the farmer protests in Ghazipur against the three new farm laws.

But unlike the Singhu border protests, which are led by farmers from Punjab and Haryana, the Ghazipur protests are being led primarily by farmers from Uttarakhand, Madhya Pradesh and Uttar Pradesh.

Yudhvir Singh, general secretary of Bharatiya Kisan Union (BKU), said that what started as an agitation by 2,000-2,500 farmers has now grown into a protest with more than 40,000 farmers within six weeks.

“Mainly, farmers from Uttarakhand, Uttar Pradesh, Delhi rural, and Madhya Pradesh have joined the protests here, and the number of protesters is only increasing by the day,” he said.

Keeping in mind the biting cold, some young farmers volunteered to install tents at the protest site.

“We have installed some 800-900 tents over here since they offer better protection from the cold. It cost us Rs 3 lakh, which we raised by asking for donations in our community,” Vikramjeet Singh, a protester from Bazpur in Uttarakhand, told ThePrint.

The concerns of the protesters at Ghazipur are, however, a bit different from those agitating at Singhu or Tikri borders.

While Punjab farmers are protesting to not lose MSP (minimum support price) on their produce, the Ghazipur farmers are protesting against less government procurement, which often leads them to sell crops at rates below the MSP, and delayed payment for crops. Both the groups, however, want the Centre’s farm laws to be scrapped and MSP be made a legal provision.

The UP government, meanwhile, denied there was less procurement of crops and delayed payment, saying they have procured a record number of crops this year.

‘Payments made after a year’s delay’

Farmers at Ghazipur told ThePrint they were forced to sell their produce at rates much below the MSP as the government procured less from them in 2020.

Between April and May 2020, the Uttar Pradesh government had procured just 5.6 per cent of the state’s total wheat production, which was only 37 per cent of its target.

Sugarcane farmers from UP, meanwhile, claimed that there has been a delay of more than 14 months in getting their payment from the government.

“The promised price for a quintal of sugarcane (early crop) is set at Rs 325, but most farmers sell their crop (to government-owned and private mills) for only Rs 250-300 approximately, and that too the payments are made after over a year’s delay,” said Nishant Singh, a native of Rampur in UP, protesting at Ghazipur border.

Farmers are also protesting against the rising cost of diesel and pesticide.

“Why do you think so many farmers are dying by suicide? Farming is expensive. A small bottle of pesticides ends up costing anywhere between Rs 3,000-5,000. Diesel prices are sky-rocketing too. Where do we go?” said Lakhan Shiaga from Madhya Pradesh.

The average income of farmers from UP, MP and Uttarakhand are also lower than their Punjab counterparts.

According to a NABARD survey of 2017, the average income of an agricultural family in Punjab was Rs 23,133 per month, while the income of Uttarakhand, Madhya Pradesh and Uttar Pradesh farm families stood at Rs 10,855, Rs 7,919 and Rs 6,668, respectively.

‘Have no pending payments’

The UP government, however, denied the claim of delayed payment and less crop procurement.

Uttar Pradesh Agriculture Minister Surya Pratap Shahi told ThePrint, “We have already paid Rs 1,10,000 crore to the farmers. We have no pending payments for the year 2019-20, and only a small amount is due for the year 2020-21. These payments are also being processed. All in all, 95 per cent of the dues have been cleared.”

He also said the government has procured more wheat and rice, and that more crops have been bought at MSP this year than ever before.

Also read: What Modi govt can offer in a new deal to restive farmers to end the stalemate

Procurement and Supply Chain Predictions — The Smart Cube and Capita

‘A multiple pile-up in the fog with fatalities’: The situation Welsh businesses face trying to import from the EU