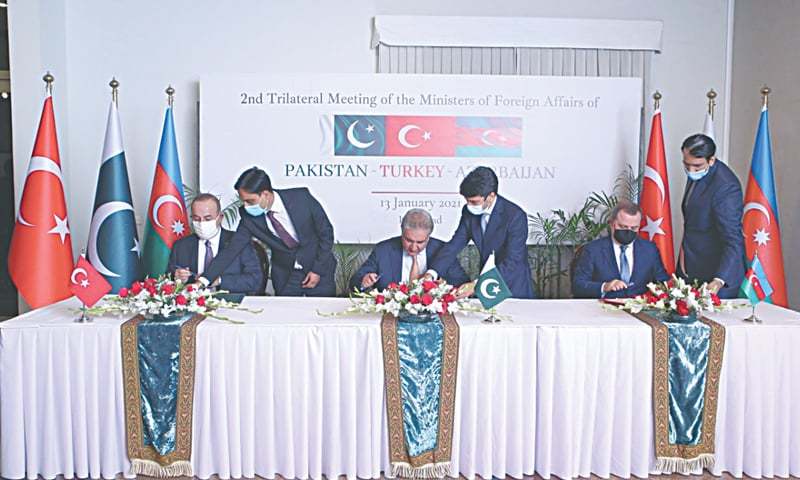 ISLAMABAD: Pakistan, Turkey and Azerbaijan on Wednesday agreed to broaden their cooperation and reaffirmed support for each other on issues of concern to them.

They discussed cooperation in political, strategic, trade, economic, peace and security, science and technology and cultural fields, besides deliberating on the challenges faced in the shape of foreign-sponsored acts of terrorism, cyber-attacks, hybrid warfare, disinformation, and Islamophobia.

Speaking at a media conference after the meeting, FM Qureshi said the three countries had resolved to enhance cooperation amongst them.

Mr Qureshi said: “We reiterated our determination to support one another on all issues of our core national interests.”

The joint communique noted that the foreign ministers reaffirmed the most recent OIC resolution on the Jammu and Kashmir dispute adopted in Niamey and Communiqués of OIC Contact Group on Jammu and Kashmir and expressed deep concern over the unilateral actions of Aug 5, 2019, continuing grave human rights violations and efforts to change the demographic structure of Jammu and Kashmir.

The three foreign ministers also reiterated their principled position for a peaceful settlement of the Jammu and Kashmir dispute in accordance with the relevant UN Security Council Resolutions.

Mr Qureshi said the people of Pakistan and Kashmiris remained “profoundly grateful” to Turkey and Azerbaijan for their “principled and steadfast support” on the Jammu and Kashmir dispute.

The foreign ministers expressed their support for a just, sustainable and realistic and mutually accepted settlement of the Cyprus issue, as well as the issues in the Aegean and the Eastern Mediterranean on the basis of international law.

They called for putting an end to the Armenia-Azerbaijan conflict and normalisation of relations on the basis of sovereignty and territorial integrity and internationally recognized borders of Azerbaijan in accordance with the relevant UN Security Council resolutions.

Thanking Pakistan and Turkey for their support during the second Karabakh war, Azerbaijani Foreign Minister Jeyhun Bayramov invited Turkish and Pakistani companies for the reconstruction of areas liberated from Armenian occupation.

They noted the positive momentum in bilateral ties and agreed to ensure timely implementation of decisions taken during the last session of High-Level Strategic Cooperation Council (HLSCC) in Islamabad in February 2020.

Both ministers expressed concern on the growing phenomenon of Islamophobia and agreed to increase collaboration “to reflect the true values of Islam and enhance interfaith harmony globally”.

The prime minister highlighted the importance of working to combat Islamophobia and promote better understanding of the reverence Muslims have for the Holy Prophet (PBUH).

Plans for autumn Sculpture by the Sea abandoned