The 2019 construction of a green storage building on the site of a proposed waste facility in Schuyler County does not violate state rules that ban construction activity without a permit, the state Department of Environmental Conservation has ruled.

The decision drew sharp criticism from Yvonne Taylor of Seneca Lake Guardian, which opposes the project.

“He is not supposed to construct any part of what is intended to be a waste facility without DEC permits, and he went ahead anyway,” Taylor said. “It’s embarrassing for the DEC to do this. It sets a really bad precedent for other industries.”

Mente is seeking a state permit to develop a “materials recovery facility” that would handle up to 500 tons of waste a day. Drawings in his permit application show a primary waste separation building and a smaller storage building.

State law prohibits any phase of construction to begin before a facility obtains its DEC permit, which has hasn’t been issued. In his application material filed in September 2019, Mente said his facility would not be developed in “multiple phases.”

Mente acknowledged in a recent interview with WaterFront that “the (green storage) building has been there since June of last year.”

In recent weeks, the DEC has issued conflicting statements about building construction and earth-moving work at Mente’s property near Alpine Junction.

In a Sept. 21 statement to WaterFront, the DEC said it “was first made aware of the (building) construction via a report to staff received Sept. 18, 2020. DEC immediately began an investigation….” 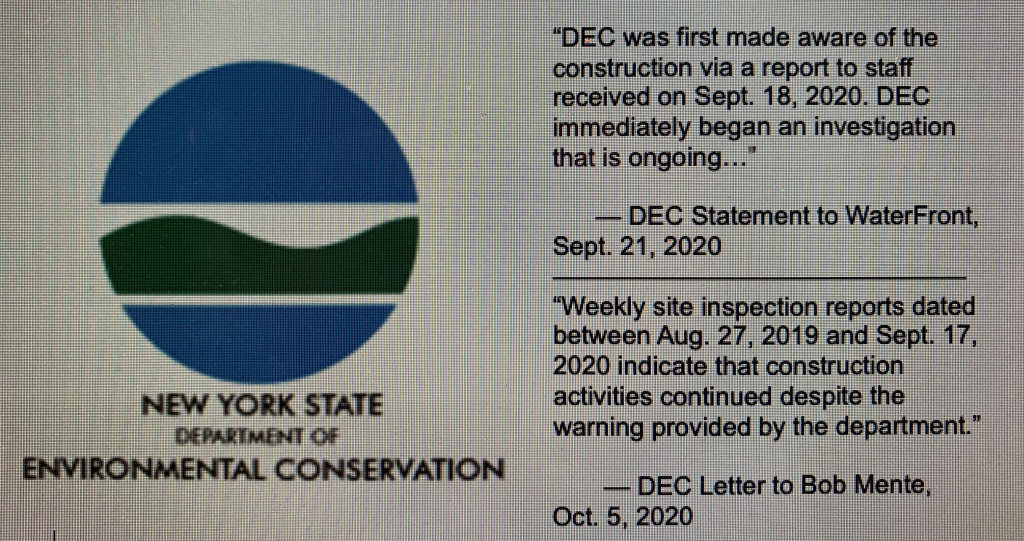 But the agency had been conducting weekly inspections of the site beginning more than a year earlier, according to a letter the DEC sent to Mente last week.

The Oct. 5 letter included an official “Notice of Violation” of the site’s stormwater discharge permit due to unauthorized “clearing, grading, excavation, and soil stockpiling.” It  ordered corrective “erosion and sediment control measures” by the end of the month, as well as a “shutdown” of “construction activities.”

In bold letters at the conclusion of the letter, the DEC’s Luke Scannell wrote that the agency was “reviewing its options regarding appropriate enforcement actions,  including assessment of penalties, fines, and injunctive relief for the violations which have already occurred.”

Scannell noted that the law allows for civil penalties of up to $37,500 per day for each violation.

It wasn’t Mente’s first warning about the earth-moving. The DEC had notified Mente’s engineer, Brian Grose of Elmira-based Fagan Engineers, last December that conditions of the stormwater discharge permit “had not been met” due to the earth-moving noted in the state inspections.

In spite of those unresolved issues, DEC ruled last month that Mente’s proposed facility “will result in no significant adverse impact on the environment, and, therefore, an environmental impact statement need not be prepared.”

In that so-called “negative declaration” dated Sept. 3, the DEC noted that the facility would “disturb 0.412 acres within a 7.4-acre property…. Erosion and sedimentation controls will be used. No significant amount of vegetation will be removed, therefore the erosion potential is low.”

Mente did not return phone calls seeking comment on the Notice of Violation for the earth-moving activity or the DEC’s decision to OK the construction of the green storage building.

Asked about the Notice of Violation for earth-moving activities, Taylor of Seneca Lake Guardian said, “Thank God DEC is a least giving him a slap on the wrist for that.”

Taylor said SLG and others plan to urge the Schuyler County Legislature to enact a moratorium on waste facilities in the county when it meets tomorrow night (6:30 pm, Human Services Complex, 323 Owego St. Montour Falls, Room 120).

A committee of the Legislature already has passed a resolution that calls for Mente to rewrite his permit application.

Fagan Engineers, the company Mente has used to design his project and prepare his environmental assessment document, was founded by Dennis Fagan, who retired as chairman of the Schuyler Legislature at the end of last year.

Grose, the Fagan engineer who signed a 13-page environmental assessment document on behalf of Mente in September 2019, declined to comment.

We believe in a product that is accessible to all readers online. That’s why you’ll never see a paywall on FingerLakes1.com. That said, a recurring monthly pledge of any amount through Patreon can help us deliver more content, and more in-depth coverage throughout the region. Visit www.Patreon.com/FL1 to become a supporter!

Global SaaS Based HRM Market 2020 | Know the Companies List Could Potentially Benefit or Loose out From the Impact...