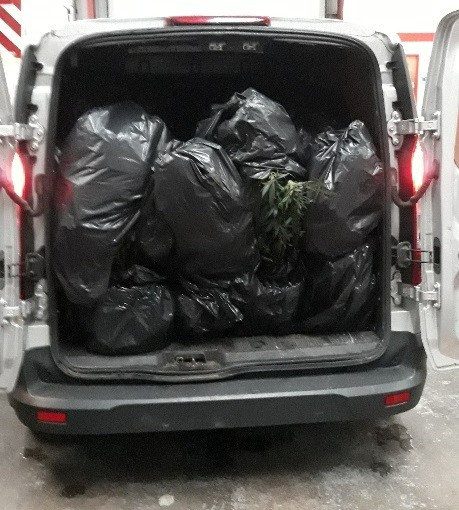 A dopey crook was caught ‘wet handed’ when cops found a van crammed with cannabis plants after a drug factory was flooded following torrential rain.

Police intercepted a van full of cannabis plants that were being moved from a flooded property in Worksop, Notts.

Officers who were carrying out patrols when they spotted the van speeding at around 10.30pm on Sunday (10/11).

Two men fled into nearby fields and officers found the van was packed full of bin bags containing 25 mature cannabis plants with a total street value of over £20,000.

The 26-year-old driver was arrested nearby on suspicion of production of cannabis and being concerned in the supply of cannabis.

Officers swooped on a house in Market Street, Worksop, and found the cellar flooded
which disrupted the electricity supply to the attic where the plants were being grown.

Officers seized one remaining cannabis plant and growing equipment from the attic.

Sergeant Tony Rungay, of Nottinghamshire Police, said: “What started as a relatively routine vehicle stop led to the discovery of a large quantity of drugs.

“The flooding has had a big impact on the town of Worksop, causing misery for a number of families who have had to leave their homes.

“However, it appears it has also had the impact of flushing out some criminal activity by halting some large-scale cannabis production.”