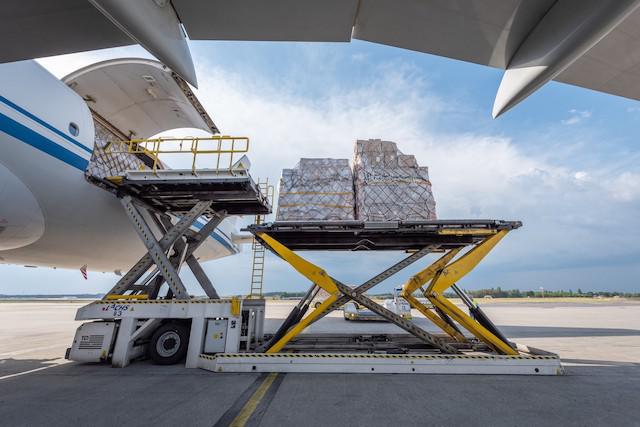 It’s estimated it will take 8,000 type 747 cargo planes to transport the vaccine to the 7.8 billion inhabitants of the planet, according to the International Air Transport Association (IATA), with vaccine conservation requirements between -70 and -80°C for the Pfizer vaccine, and between -20 and 8°C for Moderna’s. The logistics around the transport of either one will require careful organisation and logistics.

In Europe, several airports are standing by, including Frankfurt, Europe’s leader in freight transport in 2018, per an Atlasocio ranking. It has more than 12,000m2 of refrigeration capacity. In France, various sector players have started to discuss the role of Roissy-Charles de Gaulle airport, which was responsible for the transport of more than two million tonnes of goods in 2018, according to RTL.

In Belgium, Brussels airport, having transported more than 500,000 tonnes of goods in 2018 and with over 30,000m2 of temperature-controlled space, has created a dedicated taskforce with the company Air Cargo Belgium, according to an RTBF report. In a publication, Cargo Forwarder is even posing the question on whether the airport in Liège, with its ideal strategic geographical location, could not become a “European logistics hub” in vaccine transport, having already been designated such a role by the World Health Organization for the transport medical equipment from the first hours of the health crisis.

A Liège Airport spokesperson specified that “every airport, every cargo airline, every handler, customs agents, freight forwarders, shippers are preparing, but the challenge is not yet clear. So you have to be humble and anticipate as best you can.”

He pointed out that the handlers at Liège airport are CEIV certified, which guarantees a world standard in terms of international regulations for the transport of pharmaceutical products, which represents “one of the ‘market niches’ of Liège Airport”. At least four warehouses have refrigerated areas on site, each measuring several hundred square metres and accommodating perishable goods for a short time, at temperatures as low as -20°C. “For products that must be frozen at -80°C, it will undoubtedly be the pharmaceutical companies which will provide the equipment for transport and will be able to produce in the different regions of the world,” said the spokesperson.

The Liège passenger terminal, deserted during this period, has already been transformed into a centre for monitoring vaccine transport operations, and a dry ice production and supply station, operational 24/7, should be set up in the baggage terminal.

Luxembourg airport, with 893,000 tonnes of goods transported in 2019, is no exception. “At Findel, the air freight community is preparing for various logistical vaccination scenarios and following the latest developments,” it said. “However, at the moment, there is not enough information available on immunisation and logistical needs. Therefore, we will communicate at a later stage.”

However, it said “Luxembourg airport and the various freight players are well experienced in the transport of temperature sensitive goods, such as perishable foodstuffs and pharmaceutical products. In addition, the cargo centre at Luxembourg airport has a dedicated and certified pharma center specialising in cold chain management.”

So are we heading towards competition amongst European freight centres? “Luxembourg, Brussels, Amsterdam, Paris, Frankfurt, Liège… All airports will have to collaborate and it is not a question of competition, but of obligation of results for the whole logistics chain,” said the Liège spokesperson. Lux-Airport, for its part, declined to answer this question.

Their role had already been essential during the first phase of the crisis, in particular for the transport of personal protective equipment. Two billion masks are said to have passed through Belgium and Europe via Liège Airport, not counting respirators and protection kits. Lux-Airport does not give any figures, but it is known that at the end of April, the Luxembourg cargo airline Cargolux had delivered 768 tonnes of medical equipment to Luxembourg, the equivalent of ten Boeing 747 type cargo aircrafts. Its fleet consists of 30 Boeing 747s.

From airports to airlines

At this level, the Luxembourg carrier confirms that it will also participate in the general effort. “The airline has a dedicated transport solution for pharmaceutical and healthcare products, CV Pharma, which fully meets the stringent standards required, including for the transport of vaccines,” said a spokesperson. “Our Boeing 747-400 and 747-8 cargo fleet offer four independently controlled temperature zones that allow the transport of different types of cargo on the same flight with constant temperatures in each zone. In addition to specialised containers for the transport of thermosensitive pharmaceutical products, including vaccines, the airline company, in cooperation with its partner Dupont, has also developed a thermal blanket to improve temperature stability throughout transport. ”

But few details have been given on the organisation in future: “Analyses are underway to determine the feasibility of transporting and distributing such high volumes. The entire supply chain, from shippers to customs, handling agents and carriers, work together to ensure timely and quality delivery when needed. Cargolux is ready to rise to the challenge and continue to provide the service excellence for which it is renowned. “

Apart from airports and companies, states are also preparing for logistical efforts. France, for example, has ordered 50 super freezers to store vaccines. Luxembourg has not yet detailed its plan in this regard.

This article was originally published in French on Paperjam.lu and has been translated and edited for Delano.

A Rural School in Haiti and an Indian Community Center for Women: 12 Unbuilt Projects Submitted by our Readers