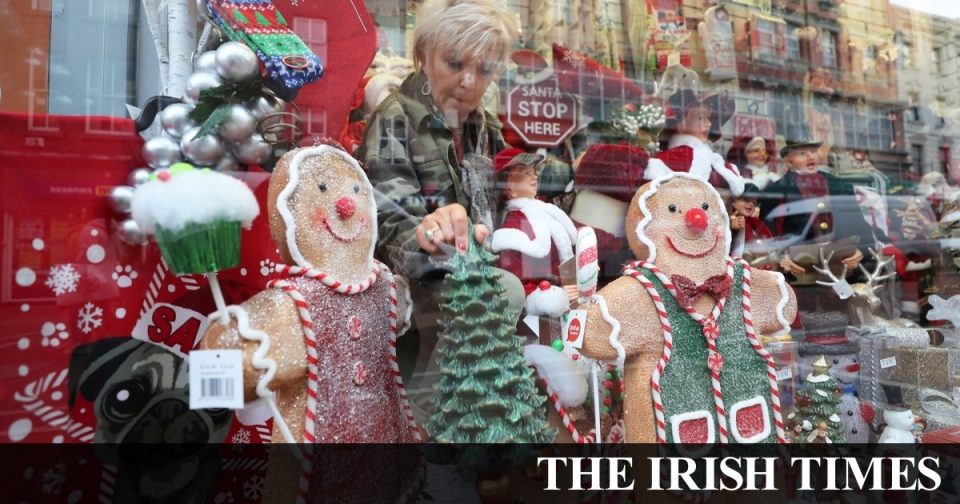 Politics is often bedevilled by short-termism and so, unfortunately, is Ireland’s current response to Covid-19.

Instead of asking how to escape repeated cycles of virus-prompted lockdowns, the question is now one of how to “save Christmas”.

This is understandable, given the importance Irish society attaches to the festive season and its role as a time for socialising and reuniting widely scattered families, and not forgetting the hardships of the year that has nearly passed.

Blind spots are another challenge, and the management of the virus is no exception. Public health officials baulk at the idea of international travel from any destination but are silent on the situation in Northern Ireland, where the incidence has been more than four times that of the Republic and where politicians plan to ease out of a half-cocked lockdown next week.

As long ago as February 8th, weeks before Covid-19 came to the island, I wrote an article headlined: “Coronavirus: HSE concerned over differing cross-Border approach”. Since then, despite official assurances about co-operation, the gap in approach between the North and the Republic has only grown.

Repeated lockdowns is the unspoken policy in tackling the virus, but the good news is that each successive surge of infection becomes more manageable, and so the restrictions required to control it should be less severe.

Yes, we have more cases this time than in the spring but cases are a bad measure of the challenge posed by the disease. As I write, the HSE says it has 245 free hospital beds in the system; more than in many a bad flu day in January. While case numbers peaked at more than 1,000 a day in the second surge, the number of patients hospitalised and in intensive care eased up gently and stabilised at manageable levels weeks ago.

“The second wave is very different from the first one,” says Prof Mary Horgan, infectious disease specialist and president of the Royal College of Physicians.

This time around, there are fewer outbreaks in nursing homes, and better treatments for patients in hospital.

Steroids have made a “big difference”, Horgan says, and doctors have found that even seriously ill patients can generally be treated in a high-dependency unit rather than requiring intensive care.

The median length of stay for a Covid-19 patient in ICU has dropped from eight days in March to four days now, according to the Department of Health. Thanks to the expertise of Irish health workers, the risk of a virus patient dying in intensive care in the Republic is less than half that in the UK.

Patients may be receiving a lower viral load than in the first surge thanks to social distancing and masks, Horgan speculates. “It is absolutely essential that we analyse the data and learn from it for the next experience.”

Critics of current policy say the numbers show coronavirus isn’t such a big problem after all and lockdowns are over the top. There hasn’t been any excess mortality in Ireland since spring, they point out. Case numbers and the reproduction number started falling before we went to Level 5.

Public health officials say it is precisely because of the measures taken that hospitals and ICUs have not been overwhelmed with patients and deaths have been kept to relatively low numbers.

Restrictions obviously help to bend the line on the graph, but we’ve tried out so many different levels of restrictions, both local and national, sometimes with tweaks, that it is difficult to assess the performance of each specific measure.

Prof Philip Nolan, the National Public Health Emergency Team’s main modeller, believes Level 5 measures were “definitively” needed to get us to “where we are today” with case numbers falling steeply.

He admits he doesn’t have “a gold standard of proof” because of the complexity of analysing the mix of restrictions but plans to make his case in detail soon.

“There is to my mind sufficient evidence that Level 3, when adhered to in a particular way, probably give us a reproduction number of 1, but nowhere near 0.5, and that’s where we need to get.”

Getting the reproduction rate down to 0.5 means every two people with the disease transmits to only one other person, so it is effectively dying out.

That rate of progress – and we are on track – gets us to 50-100 cases a day by the end of Level 5 measures at the start of December. There are then three options: continued suppression through the prolongation of restrictions, a large-scale lifting of measures to enable Christmas to take place more or less as normal, or some intermediate stab at Level 3 measures designed to keep the situation stable.

The problem is that a Christmas-tinged Level 3 may not deliver the desired stability. Festive socialising will inevitably drive case numbers up quickly enough, and intergenerational mixing runs the risk of serious illness among older people. In this scenario, officials will be proposing another lockdown by the end of January, with all the economic destruction that implies.

The likelihood is that Government will ease restrictions gradually in December. Level 3 allows shops to open while requiring people to stay in their counties; moving to it would therefore boost the pre-Christmas economy and could be sold as a “shop local” initiative.

It is early days yet in terms of planning, but Ministers may opt to further loosen restrictions around Christmas week to allow some degree of mixing. The shorter this period is before we go back up the levels, the less fuel will be provided for another wave. It could be sufficient thereafter to implement Level 3 into the new year, with some additional restrictions in areas where outbreaks flare up.

With Pfizer’s announcement this week, a vaccine has moved from being a possibility to a probability in the minds of policymakers everywhere. The reality is that there are many hurdles to be overcome before a working vaccine is approved, distributed and administered in sufficient quantities to make a difference.

The political calculus will be to hold off a third wave for as long as possible until a vaccine comes into play. Given what happened this autumn, this may require the reimposition of restrictions at some point.

We still know very little about what factors drive cases. Are shops dangerous or not? Gyms? Religious services?

Nphet has ruled that all international travel for Christmas is non-essential, even as HSE figures put the number of imported cases at just one a day. But the data available gives an incomplete picture. In one recent case, for example, a man who failed to restrict his movements after returning to Ireland from a trip abroad led to at least 56 people being infected with coronavirus. Yet only seven of these cases were recorded as being linked to overseas travel.

International travel poses a risk, especially when virus levels are so high across Europe, but the one-size-fits-all approach of Nphet is hard to comprehend. Not even someone returning from Finland, the country with the lowest figures in Europe, would be welcome here this Christmas, officials made clear at a briefing this week.

And what about Northern Ireland? So long as it has more cases than the Republic, it will affect what happens here. Will people flock across the Border to its shops, cafes and even pubs when they reopen?

Despite the challenges, there is now an endgame in sight. In most versions, a vaccine figures prominently. But even without one, we have a clearer picture of how to avoid surges, how to protect the vulnerable and how to treat patients better. We may even be able to look forward to something approaching a normal Christmas – in 2021.

Is Hogan about to let Trump’s GM exports into EU?