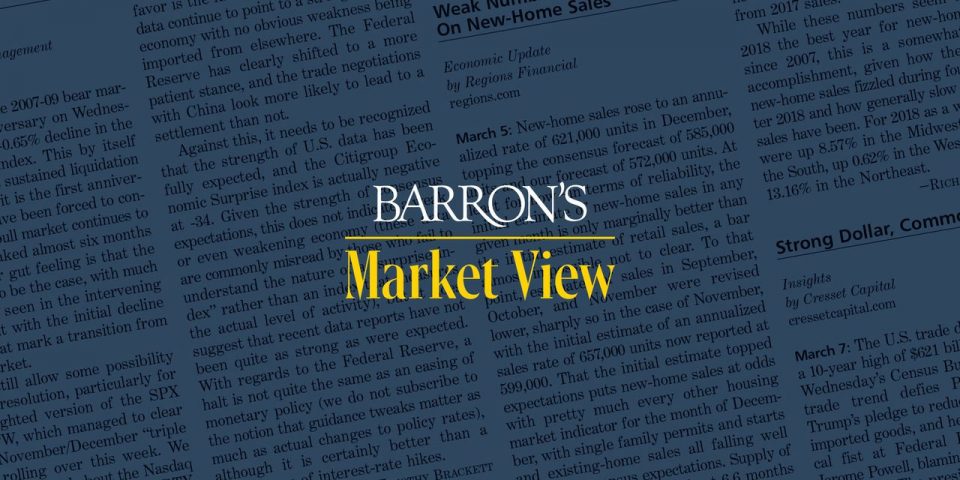 This commentary was issued recently by money managers, research firms, and market newsletter writers and has been edited by Barron’s.

According to research by the Federal Reserve Bank of Kansas City, through the first year of the pandemic, the sharp rise in the share of the population not working due to retirement [didn’t reflect] a significantly greater rate of workers choosing to retire, but rather a material decline in the rate at which formerly retired workers rejoined the labor force.

The drop in “un-retirements” through the early part of the pandemic stood in contrast with the 2007-09 downturn when, despite one of the worst job markets in the post-World War II era, the rate at which retirees rejoined the labor market was little changed.

This suggests that the share of retirees rejoining the labor force could pick up as [Covid-driven] health concerns continue to ebb and [a] less favorable financial outlook [affects] older households, particularly those that were driven into retirement by job loss and were not as financially prepared as they would have preferred.

Recent data from Indeed’s Hiring Lab show that, through the first part of 2022, the share of retired workers returning to the labor force had surpassed its 2017-19 average of roughly 3%. But dimmer job prospects as the economy slows could thwart a meaningful recovery in older workers’ participation rate over the next year, even as financial needs grow and health concerns fade.

Up the Down Staircase

Oppenheimer Asset Management
July 7: We are updating our price target for the

Our target is based on our earnings projection of $230 per share for the S&P, unchanged from our previous forecast and which implies a price/earnings multiple of 20.9 times. A rally to 4800 by year end would imply a scant 0.7% gain in the S&P for the full year in 2022.

We continue to favor stocks over bonds, with an emphasis on U.S. securities, while maintaining meaningful exposure to developed and emerging-market stocks. Among sectors, we continue to overweight cyclicals over defensive stocks and favor technology, consumer discretionary, industrials, and financials. We also maintain exposure to energy and materials as demand remains high for[them] as economies continue to reopen around the globe.

The minutes read hawkish, consistent with Chairman Powell’s postmeeting press conference and the vast preponderance of Fed-speak since then. [One snippet, though,] underscores the absurdity of the current situation: “The staff continued to project that GDP growth would rebound in the second quarter and remain solid over the remainder of the year.”

So, in material prepared for a meeting a scant three weeks ago, the army of Ph.D economists employed by the Federal Reserve, along with all their fancy econometric models, forecast that real gross domestic product growth would reaccelerate in Q2.

Rather pathetically, that clearly is not happening, and instead it looks as if there will be a second consecutive quarter of GDP contraction…. If the Fed can’t produce an accurate forecast of growth for the quarter in which the forecast was constructed, how can it expect to conduct monetary policy based on forecasts of conditions six, twelve, or more months out?

The answer is either [that its staff members] are delusional and truly believe they can, or they fully understand their limitations and hence policy is being conducted in backward-looking fashion. Either of these possibilities is bound to result in numerous and significant miscalculations that then have to be corrected with a destabilizing and distortionary lurch in the opposite direction…. The Fed is faced with taming inflation without having much of a clue where it may be headed or what the future path of growth might be. Good luck with that. If anything close to a soft landing is achieved, that is exactly what it will have been.

Daily Notes on the Global Economy

High Frequency Economics
July 6. Everywhere we look, economies that import oil, natural gas, foodstuffs and industrial commodities are getting their guts kicked by rising prices. Germany’s vaunted trade surplus is gone, as reported by FSO on Monday. So is Japan’s. Britain has reported the four biggest monthly trade deficits in its history, leading to a record current account deficit that is so huge it threatens the stability of the pound sterling.

We have seen this before. In the 1970s, economies that imported crude oil and other commodities ran up unsustainable trade and current account deficits: Import bills soared as nations tried to adjust their energy consumption to levels they could afford without borrowing.

Fixed exchange rates and limited capital flows meant governments were obliged to defend their currencies with intervention using cash reserves or accept devaluation when the external deficits got too big… as they did. Some nations borrowed on international capital markets to finance their deficits, leading to sovereign debt restructuring a decade later.

Ultimately, Britain, Euroland, and Japan will have to sell some kind of asset—most likely, a government bond or two—to finance external deficits. What do they need to do to make their bonds more attractive to foreign buyers? Well, if something is made cheaper it generally finds more buyers, eh? Thus, there is an outlook for these big trade deficits to generate higher bond yields, relative to economies that don’t import these materials and thus do not suffer a trade blowout.

To be considered for this section, material, with the author’s name and address, should be sent to [email protected].

Polypropylene Procurement Category Is Projected to Grow at a CAGR of 6.56% by 2026, SpendEdge Reports