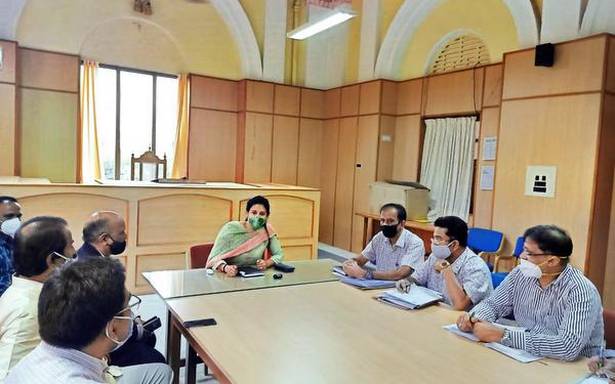 All factory workers in Mysuru are now supposed to undergo the COVID-19 test with Deputy Commissioner Rohini Sindhuri making the test mandatory in an effort to control the spread of the pandemic.

During a meeting with the representatives of various industries and office-bearers of Mysuru Industries’ Association here on Friday, Ms. Sindhuri sought the support and cooperation of the industrialists for getting the tests done on all workers and staff.

They was told to lay emphasis on the screening and testing of workers aged above 50 years and also those with co-morbidities. Whoever has symptoms had to be immediately tested and the Health Department should make the arrangements in this regard, the DC told the meeting.

Sources in the Health Department told The Hindu that the department was already making arrangements to carry out testing for industry workers, covering all the industrial areas in the district, with focus on units in Mysuru and Nanjangud – a major industrial town.

“Mass testing of the workers will be done in the next few days. The testing teams are being readied. Like how we are subjecting visitors at the palace to the test, in the same way will all factory workers be tested,” a health department official said.

Also, the Mysuru City Corporation has deployed mobile testing teams for doorstep tests and such teams would also be used so that testing target on the industry workers was met.

The decision to test all factory workers gains importance since many workers had tested positive for COVID-19 in the past, resulting in the closure of units for many days as a precautionary measure.

Managing the entire supply chain proactively in the new normal

Tech and the fake news factory