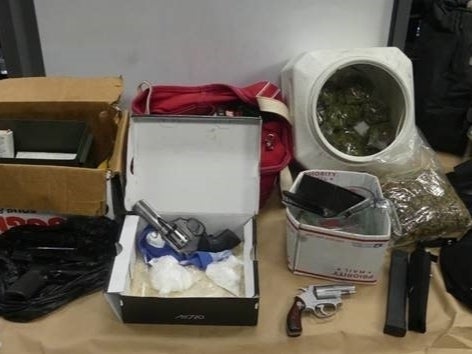 STRATFORD, CT — A couple is charged after police found cocaine, marijuana and illegal guns in a Stratford home, according to law enforcement.

Officers on Tuesday searched the residence in the 100 block of Columbus Avenue, where Kevin M. Lopez, also known as “Cano,” was living and running an illegal operation, Bridgeport police said in a news release.

Inside the home, officers found 5.6 ounces of uncut cocaine packaged for sale, 2.5 pounds of marijuana, four illegal guns, $4,500 in cash, hundreds of rounds of ammunition, a bulletproof vest, three holsters, marijuana packaging and scales, according to the news release. The items discovered by police were accessible to anyone in the home, including the child Lopez has with his girlfriend, Stephanie Gonzalez, the news release said.

Lopez, 26, and Gonzalez, 33, were arrested and charged with operating a drug factory, possession with intent to sell, risk of injury to a minor and numerous firearm violations, according to police. Their bonds were set at $500,000, the news release said.

Both Lopez and Gonzalez have criminal histories that prohibit them from possessing guns or ammunition, according to police, who noted that when Gonzalez was arrested this week, she was free on a $50,000 bond for firearm-related charges in March.

Tuesday’s search was the result of a joint police operation involving Bridgeport officers assigned to the Connecticut State Police Gang Unit and the FBI’s Violent Gang Safe Streets Task Force, as well as the Stratford Police Narcotics Unit and the Bureau of Alcohol, Tobacco, Firearms and Explosives.

Fire breaks out in plastic factory in Ghaziabad – DNA India