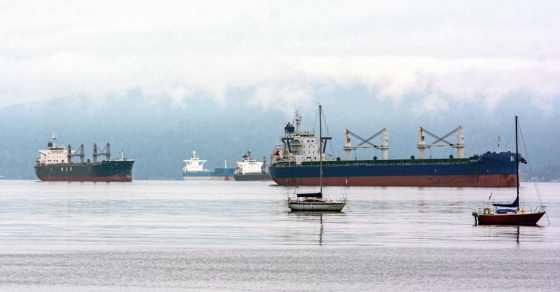 For those who are focused on protest blockades and their huge negative impact on B.C.’s port business, Henry Byers has more bad news: the worst may be yet to come.

Byers, a market expert for international freight forwarding and maritime sectors for U.S. consultancy/industry publication FreightWaves Inc., said not many people outside the sector have been paying attention to the drastic drop-off in global container cargo ship traffic so far in 2020, which has resulted from the COVID-19 coronavirus outbreak in China and subsequent fears of a global pandemic.

It means that ports like Metro Vancouver and Prince Rupert – heavily dependent on transpacific container traffic – may soon see far fewer ships coming from Asia than in years past, and the ripple effects on trucking, rail and intermodal shipping sectors in Canada could last throughout 2020.

“Things don’t necessarily work in tandem, and I don’t think people fully realize the impact of what’s to come,” Byers said. “But I think it will certainly start to rear its head in the next week, when people will start to talk about where the volume [of container freight] is. If you haven’t been paying attention, the coronavirus has been putting an end to a lot of that volume.

“The U.S. freight market, the Canadian freight market – anybody whose livelihoods are dependent on that freight – they will all see their volumes taper off alongside the container freight drop-off.… You may see some very eye-opening bankruptcies and closures in Canada and the U.S.” The best indicator of global container capacity health is the Asia-Europe route, the world’s largest shipping lane.

According to container analytics firm Alphaliner, on that route in the eight-week period following Chinese New Year this year, there have already been 40 cancelled container ship sailings – amounting to a staggering 700,000 20-foot-equivalent units (TEUs)of capacity wiped off the board.

The same period last year saw only 15 cancelled sailings on the same route, usually to accommodate Chinese manufacturers taking a two-week New Year’s break in producing goods for export. This year, with the COVID-19 outbreak already killing more than 2,700 people in China, the extended shutdown of the central province of Hubei and many factories around the country has meant a dramatic fallout in demand for freight ships travelling from China to other markets – including Canada.

The same Alphaliner report shows the transpacific shipping lane (Asia-North America included) has lost approximately the same freight capacity – about 680,000 TEUs – as the Asia-Europe lane in the same period.

In total, the global container carrier sector lost more than 1.67 million TEUs of capacity due to cancellations, amounting to revenue losses exceeding US$1.5 billion for shipping companies.

Byers said the blanked sailings have been used in part to maintain freight rates for container shipping companies, which have already been struggling with low rates because of oversupply on major trade loops.
Examples so far include Maersk (CPH:MAERSK-B), the world’s largest container shipping company, cancelling six transpacific sailings in February due to the COVID-19 outbreak’s disruptions.

Singapore’s Pacific International Lines, meanwhile, said it will be withdrawing from the transpacific market entirely – a move that may be the “last nail in the coffin” for a company whose financial health was already in question, Byers noted.

“So you’ve seen container shipping rates hit a bottom, because the container lines are saying they are not willing to go any further,” he said about the carriers’ decision to cut capacity to maintain profitability. “But for the larger container lines, there’s basically only so much capacity you could withdraw before you stop making money altogether.”

Peter Sand, chief shipping analyst at the Baltic and International Maritime Council (BIMCO), the world’s largest shipowners association, said in a report that the COVID-19 disruption is happening at an especially bad time for an industry already struggling with added costs required to comply with new International Maritime Organization (IMO) emissions regulations. The IMO 2020 rules, which came into effect in January, require carriers to switch to more expensive low-sulphur fuels to reduce sulphur emissions by 80%.

“One can only dread what the implications for companies might be if the coronavirus spreads at a pace greater than what is assumed,” Sand said. He focused his analysis on two scenarios: the COVID-19 outbreak is contained by the end of February (with Chinese workers returning to factories in March); and large-scale quarantines stay in place until March (with normalization by April-May).

He noted that under the first scenario, cancelled sailings and their impact would be more limited to the intra-Asian markets like South Korea, Japan and Singapore, which handle a lot of transshipping of Chinese goods from China through their facilities onto a third market. Sand said in his report that a lengthier disruption under the second scenario would be far worse.

“In this case, manufacturers in Asia and the rest of the world, reliant upon semi-finished goods imported from China, will have to temporarily cut production,” he said. “If that happens, container ship freight rates and time-charter rates will come under massive downward pressure.”

He added that the COVID-19 outbreak-induced container crisis highlights just how much China has intertwined itself in the global supply chain – and how much  disruption it can cause.

“One aspect has become painstakingly clear: the fragility of global supply chains. The U.S.-China trade war served as the tinder, but perhaps the coronavirus will be the match that ignites a larger-scale restructuring and diversification of global supply chains to other Asian countries and beyond.” Byers agreed.

He noted that he expects a long recovery period for global shipping if the outbreak persists.

“If everything works smoothly, you are probably looking at August before things get back to normal, and peak season is coming right after that. So you can see spot rates in the ocean market spike all the way to the end of the year, under the right circumstances.”

Byers added that the best-case scenario for Canada is that both the rail blockades and the virus outbreak situations get resolved in the next week, because the resolution of the former would give the Canadian rail system about 14 to 15 days to get ready for the resumption of regular shipments from China once the outbreak quarantines start to come down. But the likelihood of that happening is highly uncertain.

Serious about salt: It keeps our roads ice-free but how can we keep it from killing our lakes?

Tests extended to all health workers