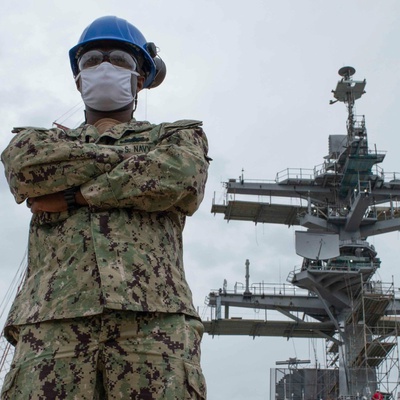 The 2020 presidential campaign was focused on the pandemic, up until Friday night when Supreme Court Justice Ruth Bader Ginsburg died. During an already unprecedented year now there is the debate over how and when her seat should be filled. Here are some other headlines from over the weekend and today that you might have missed.

The Centers for Disease Control and Prevention reversed its controversial guidance on Friday to say that individuals who were exposed to the coronavirus but don’t have symptoms should get tested, The New York Times reported. A day earlier the paper reported that political officials ordered the CDC to change its testing guidance and it didn’t go through the normal, scientific review process.

The CDC updated the guidance on its website to say that the coronavirus can be spread through the air, after previously saying it is mainly transmitted through interpersonal contact, CNN reported on Sunday. However, The Washington Post reported on Monday that the statement was removed. “That does not reflect our current state of knowledge,” a top CDC official told The Post.

A Health and Human Services Department science adviser wrote a “scathing” email to his boss, Michael Caputo, top spokesman (now on leave) about a 32-year CDC veteran following her plea to wear masks during an interview in June. “Her aim is to embarrass the president,” wrote Dr. Paul Alexander, according to an email obtained by The New York Times. “She is duplicitous.” He also wrote out an outline to refute her points.

HHS Secretary Alex Azar issued a memo on Sept. 15, saying that he must sign off on any new regulation changes, including those at the Food and Drug Administration, The New York Times reported on Saturday. “Outside observers were alarmed by the new memo and worried that it could contribute to a public perception of political meddling in science-based regulatory decisions,” said the report.

HHS defended the change in a statement on Sunday, saying it doesn’t apply to vaccine, drug or emergency use authorization approvals and won’t delay the department’s actions in response to the pandemic. “The only change made by this memo is that, instead of the secretary’s just approving all agency regulations, each regulation now also will be formally signed by him. Any speculation about this memo being motivated by policy considerations is utterly misinformed,” said HHS. “This good-government action is only prospective in effect and minimizes litigation risk for the department’s public health actions, prevents potential future abuse of authority and is consistent with congressional intent…It is simply the ministerial, administrative act of attaching a signature to a document.”

The 26-year-old grandson of the late Robert F. Kennedy, who served as a senator and U.S. attorney general, volunteered for the president’s son-in-law and senior adviser Jared Kushner’s coronavirus task force and wound up submitting a whistleblower complaint to Congress about what he saw, despite signing a non-disclosure agreement, The New Yorker reported on Monday. “On his first day, he showed up at the headquarters of the Federal Emergency Management Agency and joined around a dozen other volunteers, all in their twenties, mostly from the finance sector and with no expertise in procurement or medical issues,” said the report. “He was surprised to learn that they weren’t to be auxiliaries supporting the government’s procurement team…‘We were the team,’ he said.”

The CDC found that almost 11,000 people were exposed to the coronavirus on flights. “Though the agency says some of those travelers subsequently fell ill, in the face of incomplete contact tracing information and a virus that incubates over several days, it has not been able to confirm a case of transmission on a plane,” The Washington Post reported on Saturday. “That does not mean it hasn’t happened, and recent scientific studies have documented likely cases of transmission on flights abroad.”

The Defense Department is starting to rewrite its pandemic playbook (last updated in 2013) after an internal study found issues with its initial coronavirus response, Politico reported on Friday. The Joint Chiefs of Staff found “the Pentagon failed to initially account for the ‘global nature’ of a modern pandemic — how far and fast the virus would spread — and had difficulty distributing key medical supplies,” said Politico. “The internal review also said coordination was further impaired by new social distance and work-from-home policies necessitated by the pandemic, according to the report, which recommended expanding access to telework.”

On Monday, the Government Accountability Office issued its third report about how the federal government can improve its coronavirus response. The watchdog found there are still medical supply shortages because there isn’t much domestic production and the demand is high worldwide, CDC should address gaps in its data on race and ethnicity, and the Treasury Department and internal Revenue Service don’t know how many eligible individuals haven’t received their stimulus payment yet.

Sens. Rick Scott, R-Fla., and Maria Cantwell, D-Wash., introduced a bill on Friday that would create a 120-day pilot program for the Transportation Security Administration to conduct temperature screenings for air travelers and then require the agency to establish policies to do so until the public health emergency ends. Lawmakers from both parties in the House introduced a similar bill in June, as NextGov reported.

The Trump administration will extend its travel restrictions between the United States and Canada through October. The Homeland Security Department “has determined that the risk of continued transmission and spread of the virus associated with COVID-19 between the United States and Canada poses an ongoing ‘specific threat to human life or national interests,’” according to a notice posted in the Federal Register on Monday.

Sens. Mark R. Warner, D-Va. and Sherrod Brown, D-Ohio, asked the Government Accountability Office to review private companies’ increased use of subcontracted workers, which “can lead to compensation penalties for workers in certain subcontracted occupations,” such as janitors and security guards. “This trend is troubling and all the more important following the onset of the COVID-19 crisis – clean and safe places of work are essential and all workers are worthy of fair and competitive compensation,” they wrote in a letter on Friday.

Today’s GovExec Daily podcast episode looks at Government Executive’s recently published feature articles about how Trump and former Vice President Joe Biden would each manage the executive branch and pandemic if they win the election in November.

Help us understand the situation better. Are you a federal employee, contractor or military member with information, concerns, etc. about how your agency is handling the coronavirus? Email us at [email protected]

L.A. Times shaken by a summer of turmoil and scandals

How Horizon Technology Drives Innovation with a Single Solution