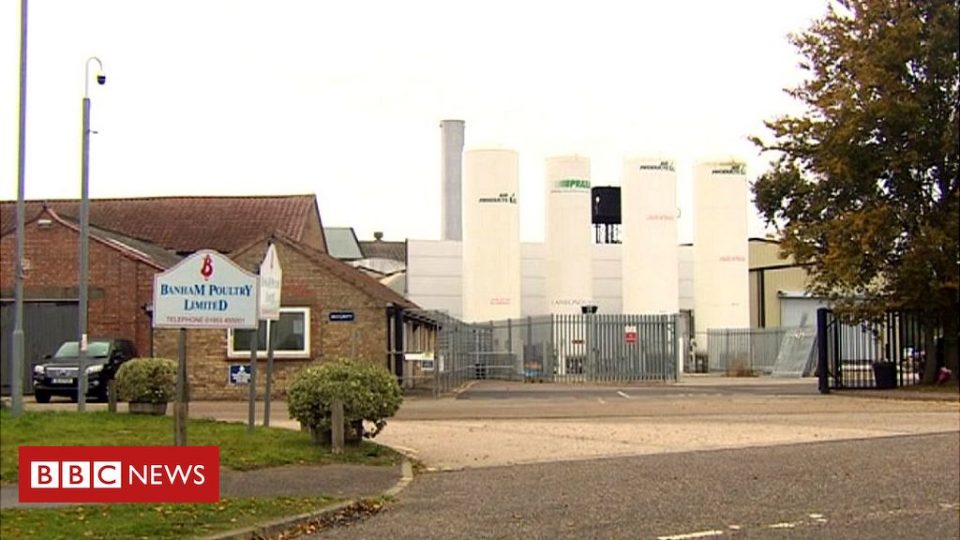 All evidence suggests an outbreak of Covid-19 among factory workers has been contained, a council leader has said.

More than 100 staff at Banham Poultry in Attleborough, Norfolk, have tested positive for the virus, with the county becoming an area of enhanced support.

A rise in infections in some areas of Norfolk is linked to staff households, the county council cabinet was told.

“The ongoing risk of transmission on site and the wider population is low,” said council leader Andrew Proctor.

The Banham outbreak has seen 119 positive cases out of 1,784 people tested, with hundreds of staff isolating at home as a precaution.

The plant has been partially closed since 27 August, at the point when 80 workers tested positive.

Last week, MP for Mid Norfolk, George Freeman said he feared a phone-based contact trace system was missing too many people after it emerged 48% of contacts in the Banham outbreak had not been spoken to.

By Friday, the government made Norfolk an area of enhanced support, which includes swifter testing and improved access to track-and-trace call centres.

Addressing councillors regarding the outbreak and the work done to limit it, Mr Proctor said Norfolk remained a safe place to live, work and to visit.

“There has been criticism of the speed of response but public health and our colleagues have worked in a methodical way in getting testing done and keeping on top of tracing contacts as best as they can,” he said.

He added: “The decision by the government to allow us to draw on support will provide swifter data and testing and allow us to respond and act faster to support our local efforts.”

It is not known how many of the 48% of contacts who remained outstanding on 1 September have since been tracked down and spoken to.

Many ‘A’ reason to attend IntraLogisteX 2020

Xiaomi is building its own smartphone factory for 5G flagships

The prop trading that got away