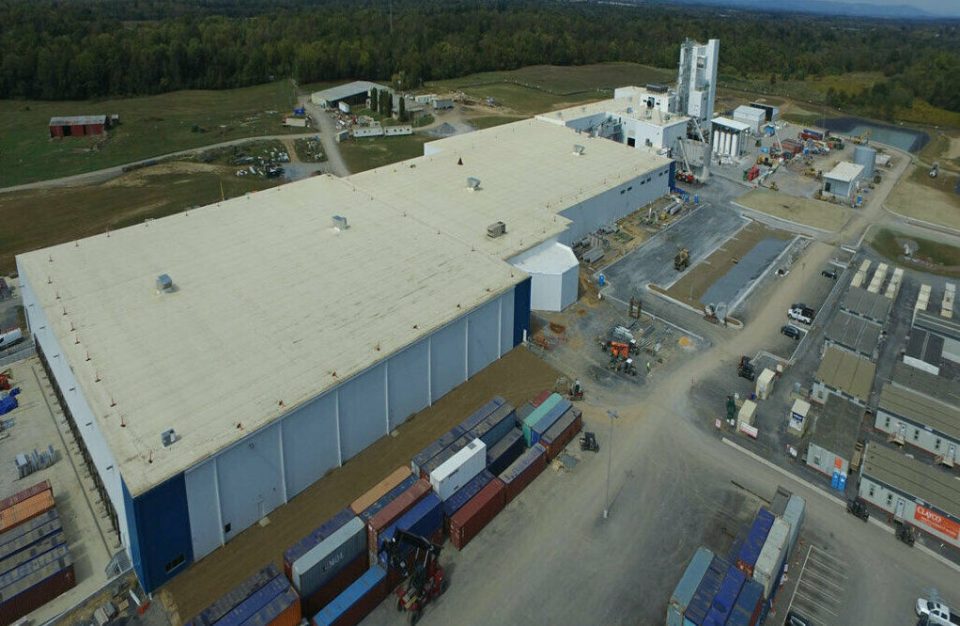 More than two years after residents in Jefferson County, West Virginia, learned ground had been broken in a former orchard for the construction of a 24-hour-a-day factory — and despite heated opposition and several legal challenges — the Rockwool insulation factory will soon open.

More than two years after residents in Jefferson County, West Virginia, learned ground had been broken in a former orchard for the construction of a 24-hour-a-day factory — and despite heated opposition and several legal challenges — the Rockwool insulation factory will soon open.

Despite assurances from Trent Ogilvie, the president of Rockwool’s insulation business in North America, that the factory would not be harmful to health or the environment, opponents launched a passionate attempt to stop the factory from being built on the site of the former Jefferson Orchards, across Route 9 from North Jefferson Elementary School.

During its groundbreaking, Rockwool projected its plant would be operating in October 2020, which has now come and gone.

But while the coronavirus pandemic has slightly slowed progress, construction of the factory has continued, and is almost finished. The chimney stacks are still to come, but heavy equipment that will melt rocks is being installed.

Employees for the factory are being hired and trained, in educational settings and other Rockwool facilities.

Rockwool says the Jefferson County factory will be in production in the first half of 2021, melting basalt rocks into molten lava, which is spun into a cotton-candy-like fiber, used in home and business insulation.

Will the Rockwool factory open?

“I think it’s clear that there’s still a core of local folks who are not happy about the project,” Michael Zarin, Rockwool’s vice president of group communications, told WTOP.

With the exception of the chimney stacks, Zarin said the exterior of the factory is complete, and equipment, including the melting furnace, is being delivered and installed.

As the company moves toward opening the factory, Zarin knows legal challenges will likely continue, even after Rockwool products are being shipped to customers.

“Of course it’s within folks’ rights to file lawsuits,” said Zarin. “We don’t believe that the lawsuits have any particular merit, but of course that’s what we have courts for.”

Representatives with the Jefferson County Foundation, the group that has led much of the opposition to the project, suggested the factory’s opening is still not a done deal.

“There are still many challenges to the permitting process that could delay or derail its opening,” said Billie Garde, an officer on the foundation’s board.

And even when the factory opens, the group plans to continue its fight, she said.

“Similar to the completely finished, but now abandoned Shoreham nuclear plant outside New York City, the risk of building a plant with a fundamental fatal flaw cannot be accepted by the community at risk,” she said.

The Shoreham nuclear boiling water reactor was built adjacent to Long Island Sound, between 1973 and 1984. After protests spurred by the Three Mile Island and Chernobyl disasters, and involvement by New York Gov. Mario Cuomo, the facility never opened.

The $6 billion cost of building the Shoreham plant was eventually passed along to customers — many of whom had opposed the reactor.

Coal taken out of the emissions equation

In July 2020, Rockwool announced it was changing the fuel it would use — converting burning coal to natural gas, in the operation of its furnace.

“The melting furnace that we’re installing to melt the stones is fuel-flexible, and it’s a proprietary technology to Rockwool, in that it can burn both coal and natural gas,” said Zarin. “That will result in about a 30% reduction in carbon dioxide emissions from the melting process, which is pretty significant.”

Asked if Rockwool’s conversion was a step in the right direction, Dr. Christine Wimer, the president of the Jefferson Foundation, didn’t necessarily agree: “We don’t have enough information to determine if it is or not,” she said. “To be clear, it is wholly unknown if that is the truth.”

Zarin said while the coal-fueled plant was originally announced, “it was always part of the plan to convert to natural gas because we knew we were working on the technology, but didn’t know how the development would go.”

Earlier this year, Rockwool converted its factories in Denmark to natural gas. “And that gave us confidence to say we’re going to run the West Virginia factory on natural gas,” Zarin said.

Wimer accuses Rockwool of “gaming the permitting process by seeking and getting lower coal-emission standards.”

From the start, Rockwool — a Denmark-based home insulation manufacturer that runs 45 factories in 39 countries, including three in Canada, and one in Byhalia, Mississippi — acknowledged surprise about the uproar from residents, who were angry that a factory was being built in the scenic county.

It was a spirited Facebook group that first raised concerns more than two years ago about what would spew from several chimney stacks — one being 21 stories high — from the site of the former Jefferson Orchards.

Several legal attempts to stop work on the project failed, while heated rhetoric escalated from social media to robocalls.

The possibility of hazardous emissions from the factory’s towers wafting 12 miles from the town of Ranson into the vineyards and other agritourism business of Loudoun County, Virginia, even prompted opposition from Supervisor Chair Phyllis Randall.

“I would normally never, ever comment on something that was voted on in another county, let alone another state. But when things like this can negatively impact my county, I think I have the right and duty to comment on it,” Randall told WTOP in August 2018.

The Jefferson County Board of Education even went to court to try to buy and condemn the land the factory was being built upon — but a federal judge said no in May 2019.

The air that children breathe

Many of the concerns voiced in the early stages of the Rockwool saga were that children at nearby schools would be exposed to harmful hazards in the air, for hours each day.

Of particular concern is formaldehyde — a known carcinogen.

“There are two air monitoring stations at two of the local schools — they’ve been up and running since December of last year,” said Rockwool’s Zarin.

Rockwool paid for the installation of the monitors at North Jefferson Elementary and T.A. Lowery Elementary schools, and the company pledged that they will run for two years after the start of operations.

“The whole idea of having air monitoring stations up and running a full year before the factory begins operations is so you have a bench mark, so people see this is what is normal, across the seasons, and then this is when the factory is operational,” Zarin said.

“These monitors do little to allay fears about the effect of air emissions on the children at these two schools, the several other schools and child care facilities within two miles, children in the surrounding neighborhoods, or their families,” Wimer said.

A human health risk assessment conducted for Rockwool by CTEH, an environmental consulting firm, in March 2020 found no discernible harm to human health.

“The ‘hazard index’ in relation to the Rockwool facility is more than 30 times lower than the level that would pose any potential risk to human health,” the report concluded. “The cancer risk for students attending the assessed schools in succession is estimated to be approximately 10 times lower than the EPA’s most protective risk threshold of one-in-one-million.”

With several months to go before the Rockwool factory opens for production, Zarin said employees are being hired and trained.

In some cases, training involves classroom study and on-the-job training at Rockwool’s other factories.

Jefferson County is the wealthiest county in the nation’s third-poorest state. West Virginia has a median household income of approximately $45,000. Opponents in Jefferson County say heavy industry doesn’t fit in an area known for beautiful and historic parks, trails, and rivers.

“We’re really looking forward to getting the factory up and running, and bringing more people onboard, and delivering for our customers,” Zarin said. “We’re glad to be in West Virginia.”

Despite Rockwool providing economic opportunities to county residents, converting to natural gas and monitoring air quality near schools, opponents of the project  said they aren’t sure they’ll ever consider the company a valued part of the county.

“Judging from our experience thus far, the answer is no,” said Wimer. “Rockwool’s lack of meaningful engagement with the public, its lack of transparency and accountability in the environmental regulatory process, and its clear exclusion of community concerns  and environmental impacts from its due diligence process shows that achieving this would be a practical about face.”

However, many in Jefferson County aren’t overly concerned.

From 2018 through the 2020 elections, some in the county used a political candidate’s support or opposition to Rockwool as a litmus test. Recent election results suggest voters’ concern is far from universal.

And, incumbent delegate and Rockwool public relations manager Paul Espinosa — whose district included the two nearby elementary schools — defeated an opponent who made Rockwool a central issue in her campaign.

Barring an unforeseen intercession, after more than two years of a company staying its course, amid acrimonious opposition, the future of Rockwool’s insulation factory is becoming more clear — the West Virginia plant will start producing its products, and vocal opposition from those unhappy with the project will persist.