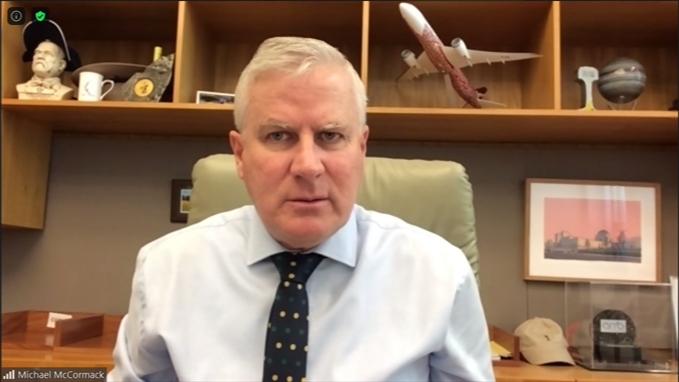 O’Hara reports the following issues were impressed upon McCormack:

“Potential industrial action might be in play for the later part of the year if negotiations with Patrick’s aren’t concluded in a timely fashion,” O’Hara says.

“On this point, I made it clear both parties need to make efforts to resolve this issue in a timely fashion and playing ‘ducks and drakes’ in this environment was in no one’s interests as we continue through Covid.”

He continues: “The increase of costs at the port for no discernible productivity remains an issue for operators. Volumes are down and the NSW and national supply chain will be feeling the effect with the immediate issues not resolved for at least three months. We do not wish to see problems for Christmas as our operators are coming into peak season.”

O’Hara states that McCormack has undertaken on the industry’s behalf to raise these issues at the Transport and Infrastructure Council (TIC).

“Our answer to all of these issues has been to regulate the port including the empty container parks for the purposes of driving productivity for consumers, the economy and our operators.

Meanwhile, despite resumption of full operations and statements this week from all three stevedore executives suggesting successful finalisation of enterprise agreements could be achieved in coming weeks, containership representative body Shipping Australia Ltd (SAL) sees ocean shipping and the landside container supply chain into and out of Sydney as both remaining extremely disrupted.

In response, FTA/APSA  raises the possibility of  shipping lines potentially ‘double-dipping’ by gaining penalty revenue from both their supplier (stevedore), and customer (exporter, importer or freight forwarder).

FTA /APSA says it has sought detail from SAL on how many ships are affected, with the assumption that many shipping lines would have adjusted their scheduling over the last few weeks as reflected by the high number of blank sailings, vessels by-passing Sydney and those no longer taking bookings to Sydney.

“The lack of transparency poses many questions and frustrations, turning the spotlight away from the core industrial relations dispute to one of opportunistic shipping line practices that appear to be primarily focussed on recovering costs to extend record profits reported during the pandemic and global economic downturn,” FTA and APSA secretariat director Paul Zalai states.

These opportunities cannot be fully realised while the costs of trade are prohibitive.”

Bill Straub: McConnell was punched out in the debate with clear-winner McGrath; will it make a difference?

Q&A: Flexport exec on coronavirus past, present and future